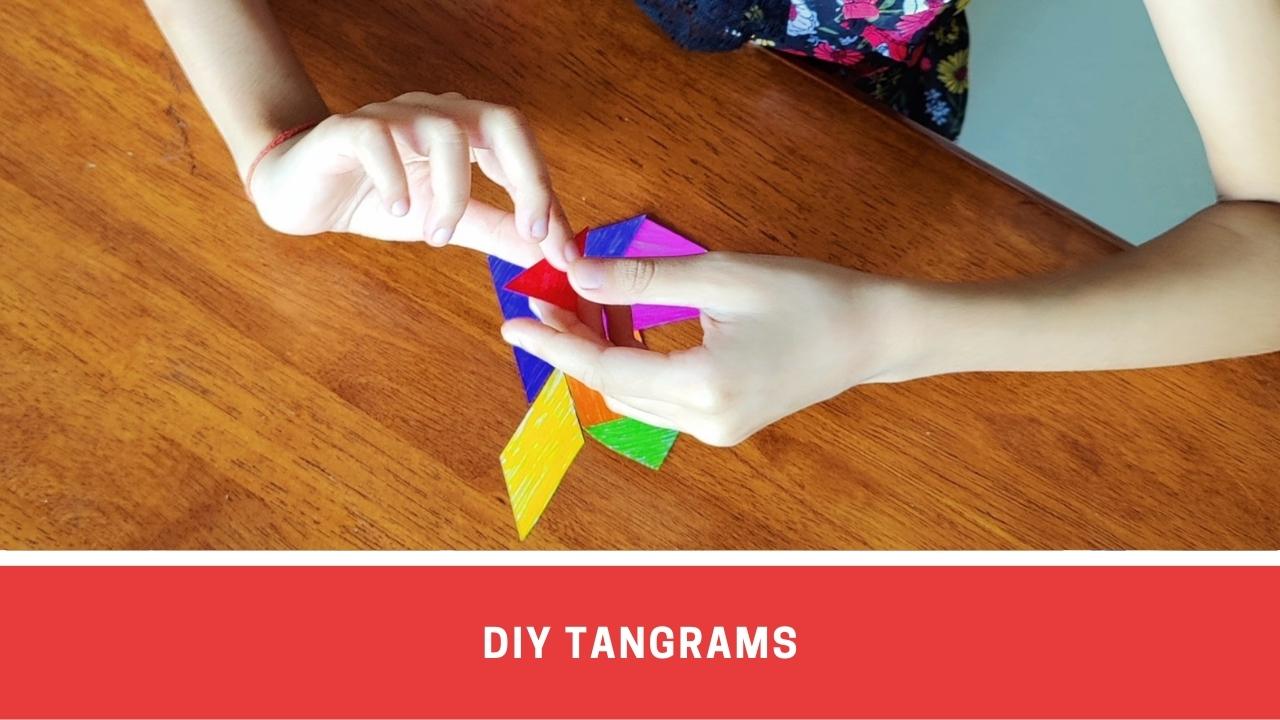 As a mom to a 9-year-old, I am constantly looking for ways to engage my daughter in fun and creative activities. “I am bored” is something I get to hear quite often as she is my only one. To address her boredom and direct her energies to something worthwhile, I am always open to trying new activities with her. When I came across DIY tangram, I knew she would love it as she enjoys crafts that give her the freedom to be creative.

Today I am going to share how you too can make a DIY tangram with your kid. But first, let me tell you what tangrams actually are.

A tangram belongs to the category of dissection puzzles. People believe it originated in China in the late 18th century. The set comprises seven geometrical shapes that can be arranged on a flat surface to form countless designs. The two-dimensional shapes that make a tangram are:

Tangrams are not just great for playing. Children can reap several benefits by creating their own designs and solving tangram puzzles. The game can help improve your child’s problem-solving, visual-spatial, spatial rotation, and critical thinking skills. It encourages kids to use their imagination and creativity and leads them to a road to self-discovery where they can explore new ideas and make something different.

So, without further ado, let me show you how you and your child can make a tangram and have some fun together!

How to make a tangram using paper?

Interesting shapes kids can make with a tangram

Once your paper tangram is ready, let your kid use their imagination to create something beautiful. Children love to recreate things they see around them, such as animals, airplanes, boats, butterflies, and so on. You may be amazed to see how creative your child can get when playing with tangrams.

Depending on your child’s age, you may have to offer help initially to give them an idea of how they can use the shapes to make different things. Once they get the hang of it, you can allow them to explore on their own.

If you need a few ideas to get started, I have compiled a collage of some of our favorite designs to make with a tangram. Take a look.

Besides being a great tool for recreation, tangrams are also useful for educational purposes. The set can be used (in fact, is often used) in schools and at home to teach math concepts to students. Creating shapes or solving tangram puzzles allows students to express their thought processes in a fun and safe environment.

Learning math in a fun way helps students build a positive attitude toward the subject. Here’s a list of math concepts that you can explain using a tangram –

DIY tangrams is a simple yet effective activity for kids.  You and your kids can enjoy making tangram sets and have fun with them. If DIY is not your cup of tea, you can buy tangrams from a store as they are readily available. Online tangram games are also accessible for kids on many websites.

Tangrams can help your kids develop discipline, attention, concentration, and patience as they’ll need to utilize all of these while playing this game. As this hands-on activity can be enjoyed by adults too, don’t hesitate to join your kid. It will provide a great opportunity for both of you to bond with each other and make beautiful memories!