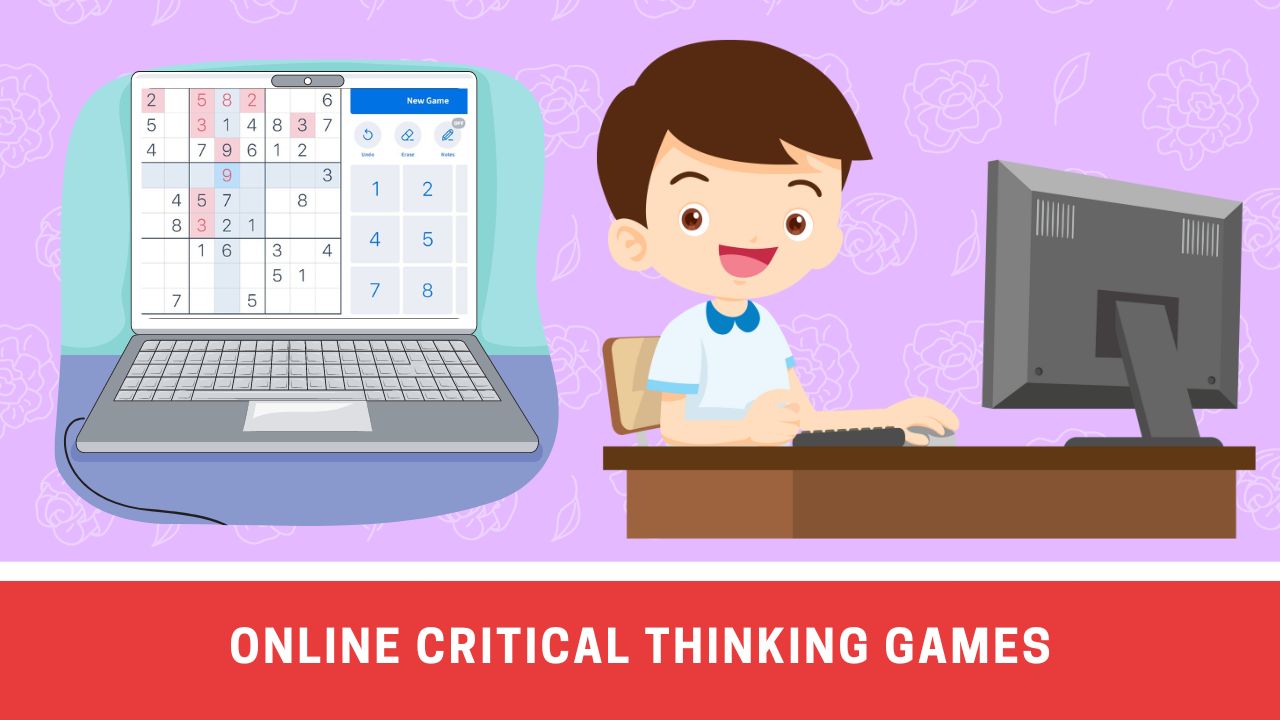 To define it in very simple terms, critical thinking refers to the overall analysis of all the facts and figures you have at your disposal and using them in an organized way to make a judgment or a decision.  There are a lot of interactive ways that can help develop your critical thinking abilities. However, what better way to do it other than playing games and having fun?

Conventional learning methods mainly demand a longer attention span which is at times difficult for young individuals. In such cases, using online games to ace the skill can be a wise choice. This post includes a list of ten online critical thinking games to develop critical thinking skills while keeping you focused and occupied in learning new things.

Various game developers have launched games that require the player to use their deep critical thinking skills in order to play and win it. From matching numbers to presenting the player with real-life situations, these online critical thinking games come in myriad forms.

The first game on the list is Spent, based on the concept of budgeting and the various challenges one has to face in their day-to-day life. While playing the game, the player will face multiple difficult scenarios and has to make crucial decisions that will directly impact their income (in the game). The kind of problems and challenges that you will face while playing the game include:

This game will get one’s mind racing as it requires making quick and critical decisions that will have an impact on the growth of the decision-making process. This game plays with planning, summarizing, decision-making, and information synthesizing skills. In addition, they get to learn about poverty, unemployment, Affordable Care Act, etc.

As the name might suggest, the air traffic controller is an online simulation game that lets a player direct and guides various aircraft on the ground, on runways, and via the medium of controlled airspace. The main purposes of the game are to manage a popular airport, ensure there are no delays in the landing or the take-off process, and see to it that there are no collisions.

In short, the player is responsible for maintaining the air traffic of that particular airport. In addition, the game also offers three levels of difficulty. At level one or Gate 1, the player needs to manage one airstrip where the difficulty level is very low. Once they are comfortable with the first one, they can move on to the second and third levels to indeed stimulate their critical thinking skills.

Sudoku is a familiar and common game. The game is based on the concepts of basic logical thinking and a combinational number placement puzzle where a player needs to fill a 9×9 grid with digits ranging from 1 to 9. But the catch is that they need to fill the blanks so that all of the columns, rows, and nine 3×3 subblocks present within the 9×9 grid contain all the digits, as mentioned earlier.

For example, if a player places ‘1’ in the first block of the first row, they cannot put it anywhere in that row and column again. They must use numbers 2-9 to complete that specific row and column. The game (or puzzle) requires one to stimulate their brain in a manner that involves their critical thinking skills and enables them to think logically while taking aid from numerical skills.

Similar to various other RPG and strategy games you will find online, Good Game Empire is based on an MMO strategy style, and the setting of the game is in Medieval times. The central theme of this game is that you need to build a thriving empire worldwide. But, you will start the game with only a castle to your name, and you have to develop and make your empire strategically and fight opposing nations. This game pushes you to think critically and expand your strategic ideals to the best extent to make your empire spread throughout the world. The game will also offer you various choices from which you would need to select the option which works the best for you.

Chess is one of the board games played across the globe that requires analytical skills. There are always two players in this game, and the primary objective of the game is to capture the opponent’s king. However, it is not as simple as it sounds. White and black checkered board (64 squares) with different pieces (each piece symbolizes different positions like King, Rook, Bishop, Queen, Pawn, and Knight) arranged on it in specific positions- this is what a player gets on the screen while they choose to play chess. They can move one piece at a time, and each piece has a set pattern of movements that they must follow.

The same applies to the opponent too. Using specially designed and designated moves, the players are supposed to check their opponents (also known as Checkmate) and capture their king to win the game. It needs the players to practice critical thinking, for one cannot randomly move pieces and win the game. Well-calculated moves and timely yet quick decisions are what they need. Thus, chess highly stimulates the players’ brains, allowing them to think critically.

The objective of the game is to freely explore the Minecraft world, explore infinite possibilities, and create new setups. Starting from building a block to making an entire city as they see fit, one can do it all in this game. This game allows you to freely exercise your imaginative and creative side of the brain.

The game is an ideal option for students to practice math concepts and give them the experience of how those concepts are used in our day-to-day lives. Players critically analyze situations and draw conclusions all the while building and planning the entire city. The game not only offers the experience of endless fun but also helps individuals to use and practice their critical thinking abilities.

Critical thinking is all about making decisions based on analytical observation and this game allows individuals to brainstorm and find answers to challenging questions. In this game, the players need to answer questions that come on the screen by choosing the correct answer from the given options. The game starts from a basic level named “Newborn.” Answering all questions enables the player to move to the next level. For example, this Newborn level has 18 questions.

A maximum of four players can join and compete with each other to complete small tasks and objectives ahead of every other player. The players would need to push their brains to their limits which means that this game will stimulate their brains and let them exercise critical thinking skills. In addition, this will allow them to improve their decision-making process.

2048 is a sliding puzzle video game where the primary objective is to slide the numbered tiles within the puzzle setting until the players have combined them to form a tile with the number 2048.  Even though it sounds easy, the game requires one to think before moving a single tile as it could determine the outcome. One needs to actively think of the moves ahead of making to ensure a proper flow of movements. This game is ideal for stimulating one’s brain and keeping it on its toes.

Unolingo is an online crossword puzzle game where you need to fill in a 10×10 puzzle box. The player needs to fill the boxes by placing the word and letters precisely and completing the puzzle. Unlike a regular crossword puzzle, there are no clues as to which letter the player should put for making a complete word.

They can ask for a hint but that will add 30 seconds to the elapsed time. Clicking on the “Solve” tab will show the solved puzzle. This game requires the players to think more critically and stimulate their brains further. It is a fun alternative to regular crossword puzzles and will keep a player occupied for longer as they have to think more critically as to what letter to put and what word to make.

The Tangram puzzle is a fun game that helps one to exercise their brain. There are seven geometrical shapes in the game. Each level comes with a diagram where the players need to position the shapes such that it matches the diagram. There is a provision to rotate the shapes and place them wherever the player sees fit.

There will be 25 puzzles to solve with these seven shapes.  The faster the player solves the puzzle, the faster they get access to the next puzzle. It requires creative and critical thinking for they have to recognize which shape will fit which part of the puzzle. Also, how to rotate it to match the puzzle needs deep thinking. It pushes the player to think creatively and use their critical thinking skills.

Critical thinking refers to understanding a piece of information, analyzing it, applying it to practical application, combining the information with other prior knowledge to draw conclusions, etc. Critical thinking is essential in all aspects of life, personal or professional. These online games can help an individual use them in practical scenarios and draw effective conclusions. The games mentioned above help one to think critically and also to keep their brain active by stimulating it to its limit. These enjoyable games will keep a player occupied for longer, allowing them to explore and learn new things freely.