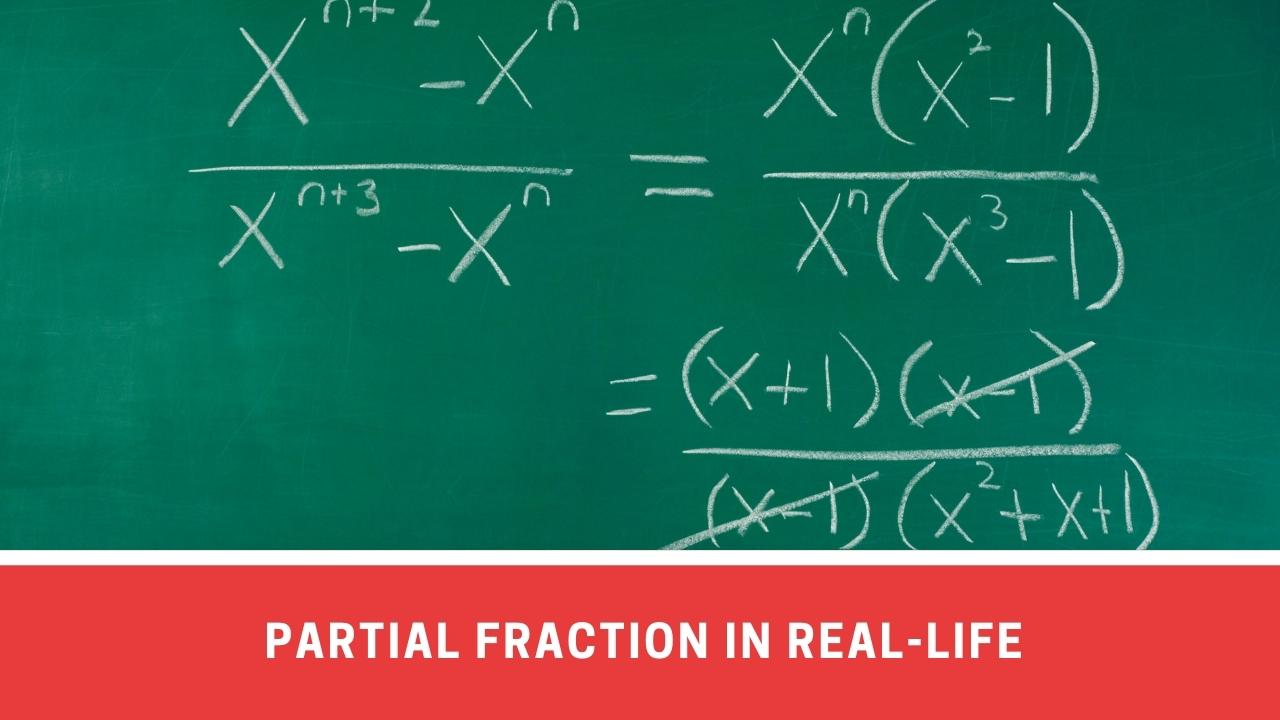 Finding out the value of unknown variables in math may not be the most exciting part of the academic life of a student. Moreover, Algebra, too, as a concept can be occasionally challenging. Woefully, rendering these expressions on fractions turns further taxing.

What would a student do in such a case? Well, partial fractions decomposition can simplify by breaking these into simpler fractions. Comprehending such concepts can be effortless when pre-eminent real-life applications and examples of the same are illustrated.

That being the case, we will plunge into what way Partial fractions are employed in real life.

Physical and other issues involving functions of several variables, such as heat or sound transmission, fluid flow, elasticity, electromagnetics, electrodynamics, and so on, are solved using partial differential equations. Moreover, partial fraction decomposition is used in engineering to find inverse Laplace transforms and to integrate rational functions. With this, we can presume that partial fractions have a lot of real-life applications too!

Here are some of them:

1. The integration of the secant function

Integration of secant function requires. It’s possible that this was the first time partial fractions were employed in an integration problem. To draw a Mercator map projection, the secant function must be integrated. This map projection is significant because it is the only conformal (non-distorting) projection that depicts genuine compass directions as constant angles.

As a result, the Mercator projection was widely used in navigation and is still used today by Google Maps and most other navigation software.

Partial fractions are utilized in various factors such as selling price, consumer purchasing power, and taxation influence quantity demand and supply, implying that multiple variables control demand and supply. In economics, marginal analysis determines or assesses the change in the value of a function caused by a one-unit increase in one of its variables. Because partial fractions are employed to break down complex rational equations into simpler ones, it plays a major role in determining the production, distribution, and consumption of goods and services.

As an example, in marginal demand, partial derivatives are used to determine whether two goods are substitutes or complementary. If the demand for one commodity rises while the desire for the other falls, they are said to be substitute goods. Two goods are said to be complimentary if a decline in one causes a decrease in the demand for the other. Mobile phones and phone lines are examples of complementary goods. If there is a higher demand for mobile phones, this will result in higher prices.

Integration is extremely important in physics. Calculating the Centre of Mass, Centre of Gravity, and Mass Moment of Inertia of a Sports Utility Vehicle. For example, calculating an object’s velocity and trajectory, anticipating planet positions, and comprehending electromagnetism. In all of these fields, partial fractions play a major role.

A recent study of the Motion of planets by Valery Ochkov[1] employed the concepts of partial fraction in determining the movement of three particulars. They used parameters like gravitational constant (G), their apparent locations (x and y coordinates), and momentum.

In chemistry, it’s used to calculate a chemical reaction’s pace and figure out some key details of radioactive decay. A sample can be studied by dividing its life into two phases T1 and T2. Mathematically,

Where T1 and T2 are half-lives of first and second processes.

Not only this, radioactive decay plays a crucial role in building up Bateman’s equation, which expresses memory effects in successive isotope transformations, the equation of which uses the concept of partial fraction.

Many concepts in statistics use fractions, for instance, the formula of standard deviation(Z) is given by:

Statisticians use partial fractions to analyze survey data to assist in developing a business strategy for various companies. It enables a more accurate prediction of the proper action in a survey because there are numerous questions with various possible answers.

An architect and engineer use a partial fraction to calculate the amount of material needed to build curved shape structures (such as a dome over a sports arena) and calculate the weight of the structure. It is also used to improve the architecture of essential infrastructures such as bridges and buildings.

Besides, the partial fraction is used in Electrical Engineering to compute the exact length of the electrical line required to connect two substations thousands of miles apart. When planning extended voyages, space flight engineers frequently employ this concept.

To launch an exploratory probe, scientists must take into account the Earth’s and the planet’s circling velocities and other gravitational factors such as the sun and the moon.

Credit card firms use partial fractions to determine the minimum payments due on credit card bills at the precise time the statement is processed, taking into account several variables such as changing interest rates and a fluctuating available amount. Doctors and lawyers also use partial fractions to help them develop the discipline needed to solve complicated problems, such as diagnosing patients or constructing a prosecution case.

Pharmacy aspirants learn Remedial Mathematics as a part of their training. Concepts like Partial fractions and calculus turn pivotal to solve different challenges in the workplace. While these fractions are used to integrate rational functions and find the inverse of Laplace transforms, they get handy in pharmacokinetic derivations and nanomedicine. Researchers employ them to use Carbon-nanotubes as drug carriers in the treatment of cancer.

Have you ever wondered about how the maps in various devices are working? Evidently, the satellite images assemble to form these. However, a concept called Mercator projection is used to show the right shapes of the continents on a map. First used by Mercator in 1569, this projection is in rapid use in daily life applications like Google maps.

Mercator Projection uses an integral concept called secant function to project the two-plane images into a cylindrical structure of the planet. Derivations and implementation of these notions need implementation of partial fractions and substitution (Barrow’s approach). Being a less spoken theory, partial fractions form the base for the Mercator projections we come across every day.

Fractions are found to be used for more than a couple of millennials now. The first-ever expression appeared at around 1650B.C. on the Rhind Papyrus, which is the work collection of several Egyptian mathematicians. Later some simple fractions were seen in Vedas (circa 1000 B.C.) and then in scriptures of Brahmagupta at around 630 A.D. with a hint of partial fractions. While the way of expressing was distinct, the notion of fractions was intact.

However, the concept of Partial Fraction was found out by Johann Bernoulli and Gottfried Leibniz in 1702 A.D. They employed the concept of decomposition in deriving theories like Bernoulli’s equation, differentiation, and integration. These ideas gained implications in various fields, and thus are welcomed soon. We can come upon many real-life applications even today.