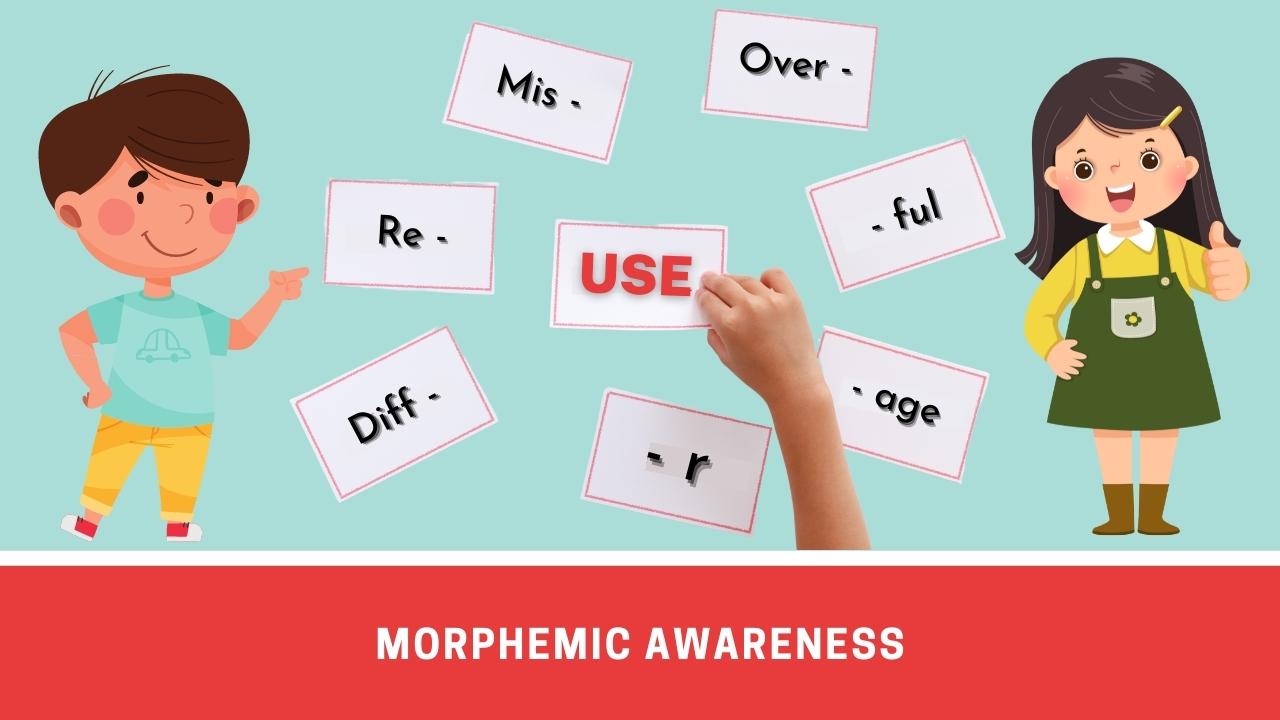 Just like math is built with numbers, languages like  English is made up of building blocks. While most believe words form these units, there are even smaller chunks known as morphemes. Mastering these may be obligatory to ensure a concrete foundation for language.  Accordingly, Morphological awareness is perceived as an ability that helps the students in their literary growth and upgrades their vocabulary knowledge.

Easy examples along with descriptions may assist in better learning of the concept. In this article, we came up with all the necessary insights and instances to explain morphemic awareness.  Further, we also listed a few classroom activities ideas to make teaching morphemes easy and effective.

The smallest base unit of a meaningful word is the morpheme. Some names contain only one morpheme (for example, jump, cherry, and torch), while others have two or more.

The word mangoes, for example, has two morphemes;

1. The word “mango” refers to the fruit.

2. The suffix “–s” indicates how many of that fruit there are.

Accordingly, it can be discerned that adding prefixes and suffixes may modify the meaning of a word. Affixes are the combination of prefixes and suffixes. A root word is a word’s most fundamental form. Affixes can be used to change the meaning of a root word. Interest, for example, is the origin of terms like disinterest, interested, and interesting from the word Interest.

In layman’s terms, Morphological awareness is defined as the ability to actively identify, grasp, and understand these minute pieces of meaning in language.  For instance,  un, dis, ment, ity, -ty, ness etc. To put it another way, morphological awareness is the knowledge that suffixes and prefixes can be installed to alter the meaning of a word completely.

As kids progress and pass from primary-grade reading materials, the length of the words and the difficulty level may drastically increase. These new changes make comprehension further challenging and gripping knowledge of morphemes can make tasks easy here.  Consequently, it may help out on the following grounds:

READ :   Is there any easy to learn language for Dyslexics?

While comprehending words at the morphological level may be crucial, some handy techniques and tools may prove handy to teach little ones. Here is a list of five such plans of action you may employ effortlessly:

Teachers may create appealing and informative morpheme reference cards for students to use when they need a short morpheme refresher or reminder to add new words in their dictionary. To assist students with this, post these cards in the classroom. Many of the teaching processes use these cards, but they can also be used on their own for learning at any time during the day.

On the card, we can put a few hints such as: Create 3 words with a prefix un or dis.

2. Models in the classroom

Make a triangular model for the kids and bring it to class with them. Write the word “triangle” on the chalkboard and present the model to the youngsters when teaching shapes in the classroom. Explain that the prefix “tri” stands for three. Therefore, a triangle has three vertices and is termed a “triangle” because it has three angles.

Prepare a model for each of the terms that share this prefix, such as tricycle, triceratops, and triplet. Similarly, models can be crafted for other chapters too.

Place a chart on a wall with a conversation like:

Father: That is the moistest cake I’ve ever had.  Hmm, I added -est to moist.

Father: Yes! Cleanest is another way to say most clean.

An innovative approach for finding, structuring, and exploring the whole set of possible relationships included in a complex word is morphological analysis (MA). It also recognises nouns, tenses, attributes, and verbs, as well as generates structure information by labeling the prefix, suffix, and all other constituents of the given word. The selection of regularly used terms makes it simple for individuals to learn how to communicate on a daily basis. In this way, they can expand their vocabulary knowledge.

Games despite being recreational can ensure learning for students. There are multiple morpheme-linked games that pupils may access effortlessly for practicing them. Here is a game you may choose:

Morpheme game by Wordwall: This serene game needs the pupils to organize the set of given words based on the similarity of morphemes used in them.  With voice cues and hints, these options can be a remarkable session.

How do you teach morphological awareness? – Activities with examples

Easing out the concept for little learners may be tricky for teachers. Nonetheless, making sure some strategies stated above may make it easier. Here we listed out a few activities with examples demonstrating how is this done:

The goal: To gain a better understanding of root words.

Make them understand that: The root word is the central word of a lengthier term, and it often has more letters than the prefix or suffix. Work over instances with the kids and give them a list of complex phrases and ask them to find the root words in the words given.

ACTIVITY 2: Fix the Prefixes and Suffixes

The goal: Better understanding of the idea of affixes.

Task: Explain to your children that affixes are small elements added to the beginning and end of words, prefixes are added in the beginning of the word, and suffixes to the end of the word. And these can change the meaning of the word entirely to create a new term. Direct your students to “patch” the broken root word by matching it with its correct prefix or suffix to it.

The goal: Applying their morpheme knowledge to discern the meaning of unknown words

Task: Assign the kids the task of tearing a page from their textbook and writing down 20 major words. Ask the student to identify the root word as well as any prefixes or suffixes for each term. They should write down the meanings of the root word, prefix and suffix, respectively, and then use that information to derive a definition for the entire word.

Root: conscious = aware of and reacting to one’s environment

Meaning of the word: influenced by a part of the mind which is unaware of something.

The goal: Creating a spelling rule based on their knowledge of affixes.

Task: Give the pupils a list of words and ask them to sort them into groups based on their spelling. A pair of affixes that mean the same thing but are spelled differently should be used to separate the two groups. Encourage kids to look over the words and make a guideline for when to use each affix.

When the base word appears to be a complete word, add the suffix –able.

Use the suffix –ible when the root word isn’t a full word.

The goal: A deep understanding of how different prefixes and suffixes modify the meaning of a root word.

Task: Assist the pupils in making a flashcard. Initiate a debate about what the root word means without any prefixes or suffixes and how adding other prefixes and suffixes affects the meaning.

E.g. The root “mort” is used as the focus, and the student can change the displayed prefix and suffix by pulling on the tabs underneath the flashcard. Immortal, mortify, and mortuary are some examples of the base word “mort.”

Addressing morphological awareness in the early years of elementary education is beneficial, but it has typically been a focus in middle and high school. As a result, it’s important to start teaching morphological awareness in elementary school so that pupils may use it to help them with reading. When you consider that the majority of new words kids read are made up of familiar morphemes that can direct the reader to the meaning.

All these insights show up how crucial they are. When teaching morphological awareness, two crucial elements to consider are increasing your students’ motivation and ensuring that they have many effective interactions with the new information. Check out the activities, examples, and strategies mentioned above to craft a morphic session.