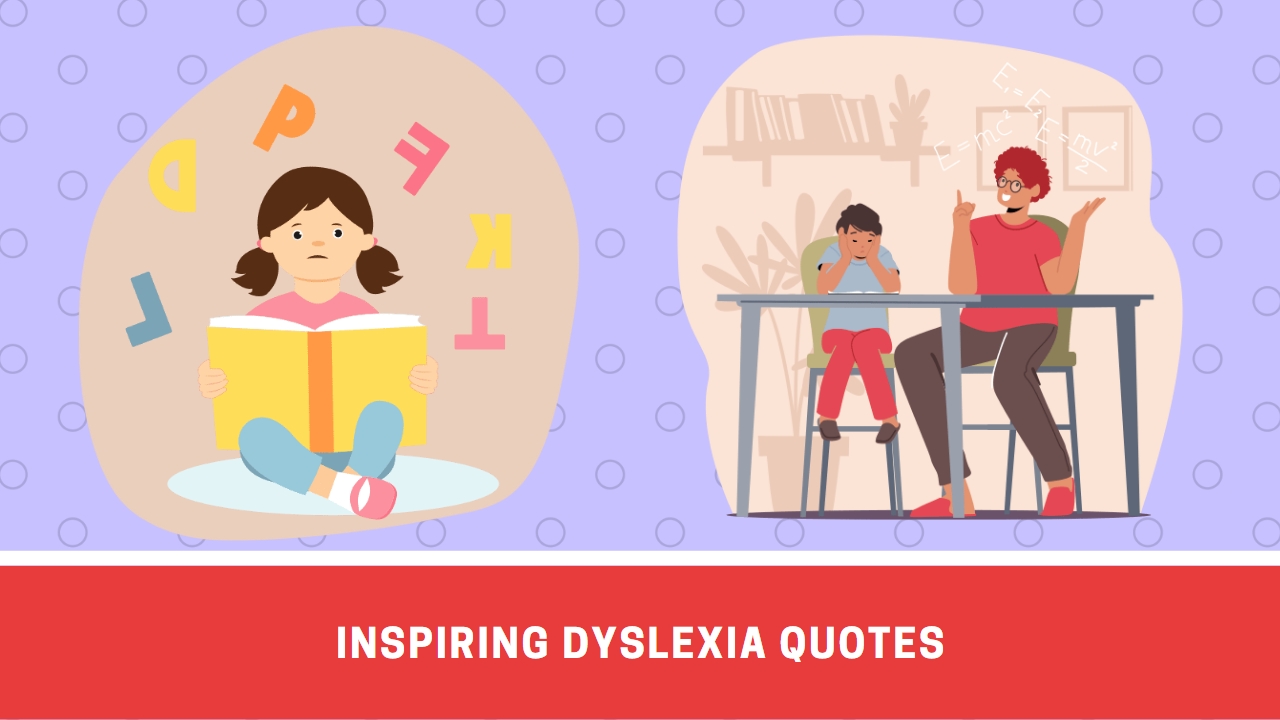 Children born with dyslexia may feel cheated with destiny at times. ‘Why me?’ is a question they may ponder over time and again. What they need to learn, and be taught with experience of others, is that destiny is never uni dimensional. Your destiny may have much more in store to offer, and may be what is your perceived shortcoming, may be a propellant to launch you in the big league.

There are many dyslexics who have reached the zenith of success in their respective fields. Many attribute their dyslexia to be a contributing factor, rather than a life obstacle. Life lessons need to be learned from them to un-learn the feeling of helplessness your child may feel on the initial diagnosis.

Hence, To lift your spirit, we brought you the top 16 inspiring quotes about dyslexia to lighten up your day. Read them, learn them, feel them, and get inspired.

“An incredibly high percentage of successful entrepreneurs are dyslexic. That’s one of the little-known facts.”

Malcolm Gladwell, is a successful Canadian journalist, so you may be sure that he has got his statistics right! Dyslexia has never stopped people from starting and owning huge businesses, or establishing empires. Need an example? The very next on our list!!

“Once freed from archaic schooling practices and preconceptions, my mind opened up. Out in the real world, my dyslexia became my massive advantage: it helped me to think creatively and laterally, and see solutions where others saw problems.” —Independent.co.uk

Yes, Richard Branson, Virgin CEO and British business magnate had a problem with reading and writing in school. And yes, his first business was opening a newspaper for students. Like he said, he saw solutions where others saw problems, thanks to his dyslexia.The metaphorical rise henceforth is a case study in entrepreneurship skills.

“Dyslexia makes things hard for me, but not impossible…I’ve learned to face problems, not run away from them.”

A Go-getter attitude is critical to any success story, and an attribute not everyone possesses. Yes, she had dyslexia, but it only hardened her will to succeed. The iron reaches its true potential when it is burned in fire. Dyslexics often have to work harder for certain things, and this becomes a behavioural attribute.

“Dyslexia was the last puzzle part in a tremendous mystery that I’ve kept to myself all these years. Remember! You are not alone, and while you will have dyslexia for the rest of your life, you can dart between the raindrops to get where you want to go. It will not hold you back.” —Hollywood

Steven Spielberg, American filmmaker and legend who gave blockbusters like E.T and The Indiana Jones series was also a dyslexia. Yet, when we look at this director with awe, dyslexic is one of the last words that comes to our mind.

“Failing isn’t a problem—interesting things happen along the way, as any entrepreneur will tell you.  After all, I haven’t actually become an astronaut, but I still hope.  And in the meantime, I do get to space with the instruments and technology I help create…Dreams don’t show up on government surveys or school league tables, but they are the fuel that makes us want to get up and get on.  For young people to feel that the low road is the only one available to them is nonsense. We won’t climb out of recession, or meet the challenges of climate change, by thinking small.”

Maggie Aderin Pocock had to change 13 schools in 18 years because of her dyslexia. Today, she is a celebrated space scientist. She attributes her failures as building blocks of her success story!

“You can take this obstacle [dyslexia] and make it a reason to have a big heart. It takes obstacles to learn, grow, be better.”

Orlando Bloom, is an accomplished movie actor. However, he believes that success is not the only measuring rod for a good life, but also requires compassion. If you have been subjected to prejudice because of your dyslexia, use it fill your heart with compassion for others in need for it, thus growing into beautiful individuals inside out.

“My greatest gift in life was being dyslexic. It made me special. It made me different. If I had not been dyslexic, I wouldn’t have needed sports.”

Caitlyn Jenner believes her dyslexia made her look for different interests than just studies, and she found sports! Like we mentioned, destiny is multidimensional.

“Dyslexia made me more introspective. Made me more thoughtful, maybe slightly slower in how I do things because it takes me a minute sometimes to figure things out.”

Whoopi Goldberg believes dyslexia also helped her develop the skill of self introspection, which is a necessity in this fast paced world where everyone sees their side of the story as the truth.

“If I’m in a meeting I just see the problems differently and I obsess about things differently. Some bits of work need to be sweated over and cried over and crafted. Because I’m dyslexic, sometimes, when it requires a load of stuff to be done, I just do it. It’s like I’m a massive ten-tonne boulder rolling down the hill.” —RadioTimes

Jamous Oliver too believes that dyslexia made him a hard worker and appreciate the little details, early in life. Sometimes, learning not to take life for granted is the biggest asset. This celebrity Chef is sure one example.

“Dyslexic kids are creative, ‘outside-the-box’ thinkers. They have to be, because they don’t see or solve problems the same way other kids do. In school, unfortunately, they are sometimes written off as lazy, unmotivated, rude or even stupid. They aren’t. Making Percy dyslexic was my way of honoring the potential of all the kids I’ve known who have those conditions. It’s not a bad thing to be different. Sometimes, it’s the mark of being very, very talented.” —RickRiordan.com

Never understimate the potential of a quiet child. Sometimes they may be struggling with things others find easy. In other times, they maybe waiting to burst into their true potential. This is a message Rick Riordan wants to spread around.

“Whenever people talk about dyslexia, it’s important to know that some of the smartest people in the world, major owners of companies, are dyslexic. We just see things differently, so that’s an advantage. I just learn a different way; there’s nothing bad about it.”

Normal may be boring, sometimes the world just wants different! And different is not pathological, but may inspire new ideas. Because, ultimately it is ideas that change the world!

“It’s about not letting the internal enemy, the real enemy, have his way because the more he does the stronger he becomes. The film’s about the devastating results that can manifest from the internal enemy being unbridled and allowed to unleash chaos.”

Dyslexia may seem like your internal enemy, but it can become your best mate.The internal struggle to understand it and make peace with it is real for each young child. However, once this is achieved, the positive energy thus generated can change how you percieve the world around you, and how it perceives you back.

“As a boy, I wasn’t very bright. I didn’t even know the time of day I was in school. I think I had dyslexia or some learning disability. I certainly didn’t fit in anywhere. The years passed and a feeling of failure was always with me until by accident I came across this career, and look at what has happened! Of course, I don’t regret anything because, in the long run, look what I’ve accomplished.”

When you get to look your life in the end through the hindsight, it should look beautiful. That is the most important message Sir Anthony Hopkins gives us. Dyslexic or not, if you can manage that, its a life well lived.

“Being dyslexic has made me realise that the best readers and writers in the world can be very dull if they don’t use their imagination.”

Dyslexic often have sparkling imagination, because they learn to rely on it since young age. A imaginative and creative mind can often inspire more than the best readers and writers in the world.

“Dyslexia taught me to think in 11 dimension

Yes, one of the greatest scientist of all times admitted to dyslexia becoming an asset for him, although it caused him problems in the school. Need we say more.

“Dyslexia is not a pigeonhole to say you can’t do anything. It is an opportunity and a possibility to learn differently. You have magical brains, they just process differently. Don’t feel like you should be held back by it.”

Princess Beatrice was diagnosed with dyslexia when she was seven year old, yet she ended up being selected the head girl in her final year. She believes dyslexic just make you different, not disadvantaged and your different way of processing things can actually be a disguised advantage! The world works in mysterious ways and by the look of these prominent celebrities, dyslexics may rule it one day!

Remember, in archery, when you pull the arrow backwards, you are actually preparing it to launch forward with the fastest speed to nail its goal! Similarly, life may seem to push you backwards, but it may be launching you into the fastest trajectory