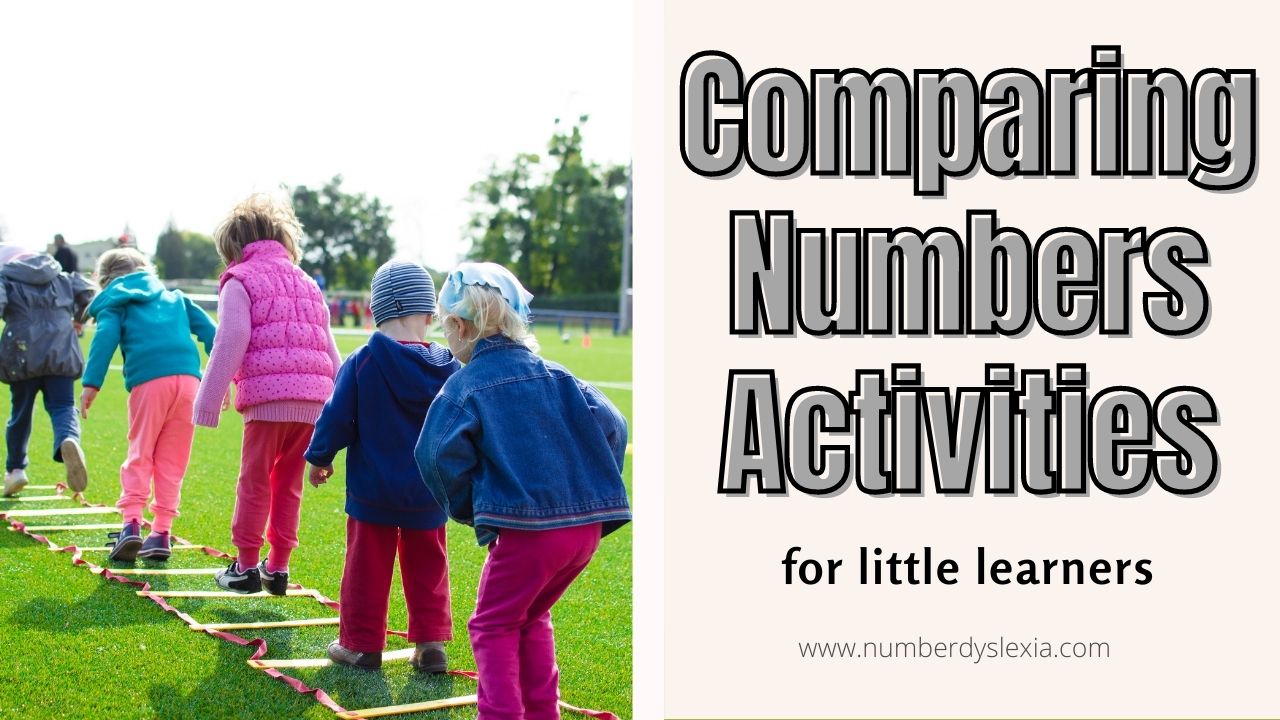 Numbers have been around us since times immemorial. Von Neuman and other scientists further coined the terms – cardinal numbers and ordinal numbers. While cardinal numbers tell us about a set’s value, the ordinal numbers convey information about the position of any object or person. In both cases, the students need to have a well-built number sense to appreciate the underlying meaning conveyed by the number.

This number sense allows the students to find the larger or smaller of the two given numbers and their values. And, this process of finding the smaller or bigger from the two numbers is called comparing the numbers. A very easy-to-follow method to learn comparison is doing comparing numbers activities.

If books tell children to learn, activities drive children towards ‘learning to learn’[1]. Activities for comparing numbers are metacognitive tools (Baker & Brown, 1984; Flavell, 1985) that allow children to think deeper and strategize to achieve outcomes like:

In a nutshell, the activities allow the students to become aware of their level of understanding or knowledge and give them a reference point from where they can decide their future course of learning.

READ :   Texting Someone With Dyslexia: Things to remember

To top it all, the early learners like kindergarteners and those born with learning disorders related to numbers find it difficult to understand the meaning of signs such as <,>, =, etc. So, they can learn from the activities and develop the number sense.

Now that we know that activities are a well-thought teaching strategy, let’s take a look at the comparing number activities that can enhance a child’s understanding of the relationship between numbers, and that of smaller quantities, larger quantities, etc.

In the activity of this comparing number, you collect some dominoes or tiles. You distribute them among children and ask them to stack them up. Naturally, the stack will be taller of that child who has the maximum number of dominoes with him or her.

This activity can tell the child the concept of the greatest number. You can do the same activity by making a pair of two students each, and ask them to measure the height of their respective stacks. Children may count the dominoes or use a measuring scale to understand the concept of smaller or bigger quantity.

Why one number is bigger than the other? This confusion can be cleared with this activity. Take the marshmallows and icecream cones. Now, ask children to fill the cones with a specific number of marshmallows, say 7 and 10, or 5 and 12 (means, use numbers that can tell a clear difference between the two pile sizes children create in cones). By taking a look at the pile size, kids can be told which number is greater and what the smaller number means.

To show how numbers denote a difference in quantities, you can even keep the numbers a secret and after completing the filling process, you can ask children to count their marshmallows. This activity can also be done in the form of a competition where the children can be asked to create the highest pile. So, by adding objects and looking at the collection size, they can get the idea of comparing numbers.

3. Take steps and find length on a race track

Steps of children replace numbers in this outdoor activity. You can do it inside the classroom by making two dummy tracks. Now, ask one child to walk 10 steps and the other one to take 5 steps.

Remember, they should be asked to maintain the step size as the same. So, once the steps are completed, draw the line to mark the end. Difference in the lengths of the two portions can allow children to learn comparing of the numbers.

Select a few children of similar build and tell them to make human circles. In the first circle, the number of children can be 5 and in other, you can ask 8-9 children to make a circle. Now, ask one child to count the children in each group.

Once the circles are made, they will find that the circle with more children in it is bigger than the one with fewer students. Thus, you can teach them the concept of number comparison, as well as bigger and smaller size by doing this activity.

5. Play with a classic deck of cards

Purposely choose a deck of the card containing 5 to 10 numbers of two different suits. Now, distribute these cards to two children. Ask them to draw the upper one from their respective decks and show.

Further, let them count the suits, say they will count 5 for 5 of clubs, and so on. The one who has higher of the two wins the set. Thus, with each turn, you can reinforce the concept of number comparison in their minds.

Number comparison activities enhance the cognition functions of the child. You can encourage them to strategize, share the reason why one is bigger than the other, and give them mental nudges to drive their mind into activity to maximize the output from these activities. Not only these activities will make memories for them, but also will give them a takeaway that is going to stay with them for life.