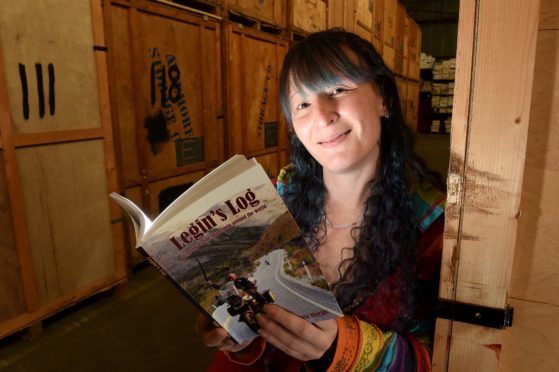 Nakita Shields, of Inverness, is a 30 year single mum with a vision to inspire people struggling through tough times by writing a book.

Being dyslexic from childhood, Nakita says that she suffered years of bullying and negativity as a youngster because of her learning disorder.

I hope that by writing this book proves anyone can overcome their own difficulties.

The book, titled as Legin’s Log, is a story of one man’s trip around the world. The life of protagonist resembles to that of Nakita’s father’s story and the reason why the name, as Legin is the reverse of her dad’s name Nigel.

Nigel brought Nakita and her twin brother up as a single parent. His motivational story involved setting up his own removal business in the city and then expanding into storage, eventually selling up the firm and travelling the world on a motorbike.

Nakita said: “His story is so inspirational too and I wanted people to know his story and have the belief that they can achieve anything.”

She added: “I got bullied at school and was told I wouldn’t make anything of myself, but I worked for my dad and have two boys.

“I got a lot of help by those at the Spectrum Centre in Inverness and now run courses on dyslexia for others.

“I had to use Google to get help spelling words, as well as use an app. I also got a lot of help from the charity For the Right Reasons, who have now published the book and it is selling really well.

“I have had a lot of inspiration messages already from people with dyslexia.”

According to Nakita, Legin’s Log helped her situation immensely and she hopes that people will take something from it, either from her dad’s story or from the fact a person with dyslexia has published a book.

Richard Burkitt, of FTRR, who wrote the preface for the book, said: “Nakita has produced this book to tell everybody about her father’s courageous journey around the world and to show that people with dyslexia can overcome all obstacles.

“In her childhood Nakita experienced much negativity and even bullying as well as complete misunderstanding of her dyslexia.

“Nakita is wanting to show the world, especially those who have dyslexia, that with a bit of imagination you can achieve great things. I love this book.”