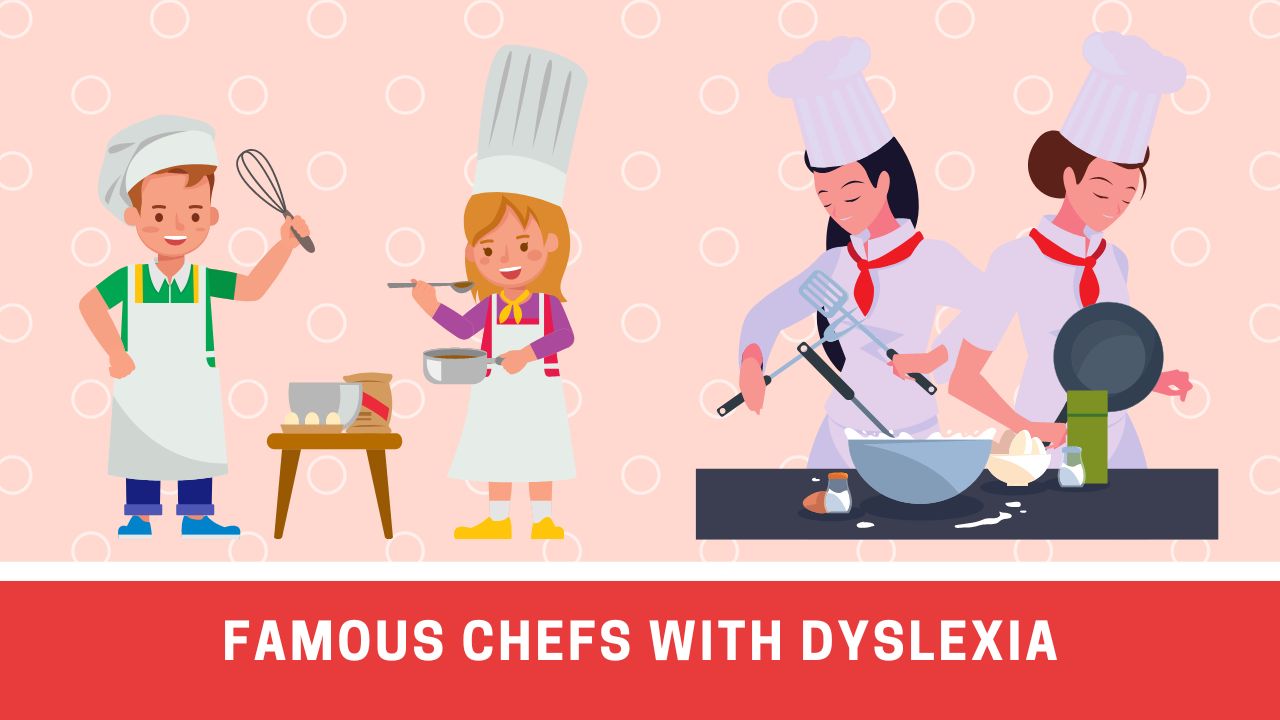 Compared to a few years ago, dyslexia is now a more common term for us. It is a learning difficulty in which individuals cannot phonologically process the sound of spoken language and, thus, find it difficult to read, speak, spell, etc.

Due to this challenging condition, it is a common misconception that it will be difficult for children or individuals with dyslexia to prosper in all aspects of life especially when it comes to career part. Contrary to that, some of the most intelligent and gifted people in various arenas have dyslexia. Among them, Albert Einstein is the most prominent name. From musicians to writers– people with dyslexia have carved their niche.

Following is a list of famous chefs with dyslexia that has not hindered them from being famous. You would wonder, “how can you cook if you cannot read a cookbook”? But that is what these chefs have done and become maestros in the culinary industry.

Who are some famous chefs with dyslexia?

Many internationally acclaimed chefs have been experiencing dyslexia for a long. While some of them were identified at an early age, some did not know about it till they reached college or later years in life. No amount of difficulty could stop them from making their dreams come true. In fact, in many cases, dyslexia and its experiences have helped them progress in life. Here is a list of famous chefs with dyslexia.

This name is not new to you if you are a culinary enthusiast. The world-famous chef with three Michelin stars frankly admits to his dyslexia and how his childhood has been traumatic due to this. He attended school during the early 70s or late 60s when awareness about dyslexia was little to nil. He was not aware of his condition himself until he reached 20 years of age. Before that, everyone simply called him ‘stupid,’ which he was not.

In an interview, he reminisces how teachers in his school were more into bullying him than other students. Despite his reading disability, they asked him to read from the book. Of course, he could not and became a laughing stock of everyone. In the same interview, he says that, to date, he does not read a book or scroll through the internet at all, for it takes him longer to read and only a moment to forget it all. You will not find Marco delivering a speech with notes in his hand, for he cannot read and memorize those notes either.

All it took to help Marco reach today’s position was his passion for cooking and ambition of doing something worthy. He would express his emotions through flavors and not through words that he cannot read, write or spell. Chef Marco turned his insecurities into his drive and did not let those few calling him ‘stupid’ fail in life. He still struggles to read, spell and memorize though he has come a long way. All these did not keep him from calling three Michelin stars of his own and continuing to be called the Godfather of Modern Cooking.

A prominent and successful name in the world of cookery, Jamie Oliver was 38 years old when he completed reading his first full novel, Catching Fire. Does that make him any less worthy of all his fame and popularity? Absolutely not. Dyslexia has made Jamie leave school with two GCSEs only. He has marked his secondary school days as rough times where everybody acknowledged his special needs, but nobody did much to help him overcome that.

Jamie acknowledges his difficulty in writing and reading freely and does not find it awkward. Though he has a number of cookbooks penned by him, he has his editor check them for all the spellings as Jamie knows his own weaknesses. When asked about how he accepts dyslexia, its consequences in his life, and how he coped with it, Jamie responds that it is the idea and passion that matter the most, not the whether you are good at everything.

According to Jamie, stepping outside his comfort zone and looking up to other ‘dyslexic heroes’ such as Paul Smith and Richard Branson motivated him. He ignores cynical people and believes that all of us can do anything we want, dyslexic or not, for “the sky’s the limit.”

Another big name in the world of cooking and other culinary skills, Andrew Dornenburg, was identified as dyslexic only after reaching college. Before that, he was “lazy and inattentive” to his teachers during his school years. The misspelling was and still is his weakness, even though he is famed as the co-author  (With his wife Karen Page) of many books such as The Flavor Bible, Culinary Artistry, The New American Chef, etc.

According to him, cooking saved him from his struggle to understand math, recognize correct spelling, and maintain proper handwriting. Andrew converted his skill to spell one word in different ways into his creativity and applied it to cooking a new dish or writing a book on a new concept. He never dumped his dream of becoming a writer someday since his childhood despite having difficulty in spelling. That determination and motivation have made Andrew reach where he stands today as one of the world’s famous chefs.

All the chefs we mentioned above have found success after they entered their careers in cookery. But if someone failed even there, that will be James Martin. You would find it hard to believe that one of the most celebrated chefs having his own BBC Cooking show, cookware line, restaurants, and cookbooks, failed to receive satisfactory grades even at cooking school. He was poor in noting the instructions down. When fortune took him to a TV show, he found it difficult to read the teleprompter.

James overcame all the struggles with the help of a dyslexia specialist and his determination to make his dream of becoming a chef come true. According to him, having dyslexia is like a benefit, for it has pushed him to pursue his dream.

Currently, Danny Boome is a regular face on cooking programs on TV. He is a trainer and teacher to experienced and wannabe chefs in New York City. He started his career in a bank, and after numerous attempts at diverse sectors, he finally found his passion for food and cooking. The added advantage for Danny was that he had highly supportive parents, and their awareness helped him deal with dyslexia from an early age. At school, he got proper training for sharpening his reading, handwriting, and spelling skills.

According to Danny, his dyslexia gave him the artistic and creative ability he implemented in cooking and came up with innovative yet unique dishes. His motivation knows no bounds. He strongly believes in trying instead of letting go. To Danny, dyslexia is not a disadvantage but rather a “creative gene“.

If you have been following cooking competition shows like Iron Chef America, Top Chef Masters, or The Next Iron Chef, Chris Cosentino is a well-known face to you. Some may identify him more readily as an athlete too. However shiny his career seems now, the road to success has not been smooth, for he has had long days of undiagnosed dyslexia.

It has been difficult for him to follow the long texts of traditional cookbooks, a problem he had struggled with since his school days when he had to read textbooks. Three cookbooks by Jacques Pepin helped him as, instead of only words, there were illustrated instructions in those books with step-by-step guidelines.

There were days in Adam Dickson’s life when he had to look into the dictionary to follow a cookbook. Today, he writes recipes for cookbooks along with the likes of Gordon Ramsay and Marco Pierre White. During his childhood, he was marked as a ‘trouble-maker,’ ‘delinquent,’ ‘disruptive,’ ‘dumb,’ etc., but not dyslexic. By the time he was diagnosed, he had already developed severe dyslexia and was 40 years old.

But Adam still maintains that dyslexia has provided him with barriers as well as the motivation to push through them by learning and adapting continuously. He still has difficulties in spelling words, and he writes letters backward. But none of these has stopped him from serving Sir David Attenborough, Kylie Minogue, John Travolta, and so on.

What makes these stars stand out?

All the chefs mentioned above have overcome challenges that came their way and succeeded in what they do. Some common steps they have followed are:

None of these famous chefs let go of their dreams even in adverse situations.

Dyslexia is nothing that anyone should be ashamed of. Though awareness is on the rise, there’s still a lot to cover to make the common people accept it. Individuals with learning difficulties only need proper care, training, and therapy to overcome the challenges. Motivation and staying true to their passion can enable them to achieve all their dreams in time. The stories of the chefs who have rightfully bagged the title of Master Chefs from many are undoubtedly inspiring. When dyslexia provokes negative and depressive thoughts in the minds of the affected, the famous chefs’ experiences will definitely help them come out of it and encourage them to pursue their dreams.