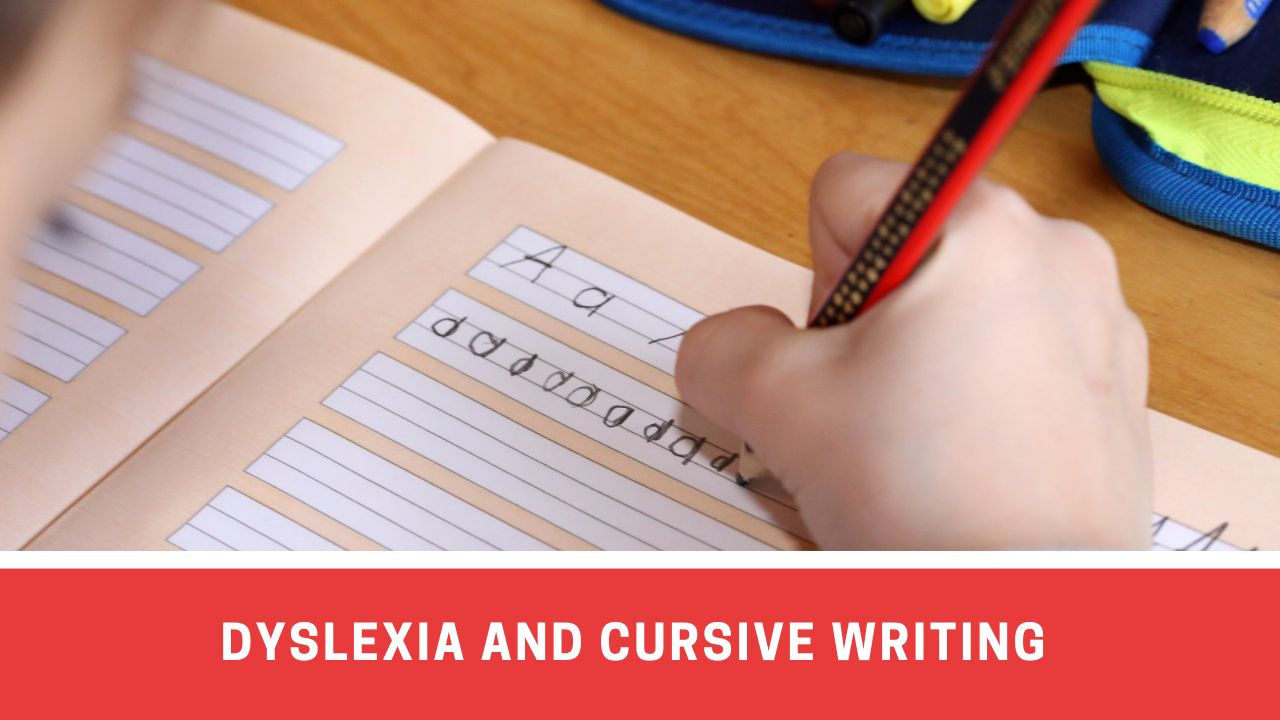 Dyslexia is a neurological deficit. It is a learning disability in which affected learners have deficits in reading and sometimes even writing. It is often characterized by difficulties with accurate word recognition, and decoding and may slow down vocabulary growth. However, with effective interventions and proper support, affected learners of dyslexia can become good readers and writers.

In the digital world that we live in today, there are many online applications that make learning easier. Cursive is suggested to improve the reading and writing abilities of affected learners as not only is it good for speed writing, it has also been shown to improve brain development in areas of thinking, language, and working memory. In this way, cursive seems to benefit children with symptoms of dyslexia and helps them learn and grow in reading and writing aspects.

The link between cursive and dyslexia: What does research suggest?

Major symptoms of dyslexia include difficulties with reading, writing, spelling and oftentimes even understanding certain words. When it comes to writing, affected learners find it quite tough to spell words correctly, or write even simple words like bat, mat, and so on. It is hard for them to recognize letters that look slightly similar in their structure such as ‘b’ ‘d’ or ‘q’ ‘p’. It has been found that writing in cursive is related to dyslexia in a manner that it turns out to be beneficial for those suffering from it.

Studies indicate that there are deficits in visual-spatial abilities in reading and writing in children who suffer from dyslexia, which contributes negatively to their learning process and makes their education compromised. Due to this, writing regular words may be troublesome. In this situation, practicing cursive could help as its format makes children write and produce letters in one particular direction which leaves fewer opportunities to get confused between left and right indentations.

Researchers have found that all students benefit from learning handwriting. A study done in July 2020, by researchers at the Norwegian University of Science and Technology showed that, despite the drastic and major shift to remote learning and so much more time spent on screens and keyboards, children and adults still benefit from writing in cursive.

Cursive handwriting – Any benefit for dyslexics?

There are various benefits that practicing writing in cursive serves for learners with dyslexia as listed below.

The British Dyslexia Association suggests that the continuous flow of cursive writing eventually improves writing speed. Along with that, it can also help learners with dyslexia distinguish easily confused letters such as “b”, “d”, “p”, and “q”. This is substantiated by the idea that since their hands develop a physical memory of the continuous and connected letters while writing, they can more consistently and correctly reproduce shapes. This leaves fewer opportunities to get confused with directionality.

Children also find it easy to remember when they themself write the letters multiple times regularly. In addition to that, words in cursive writing become a single unit, rather than a collection of disconnected strokes which helps to ensure that proper spelling is aided by muscle memory.

According to Zecher, affected learners with dyslexia have difficulty learning to read because their brains associate sounds and letter combinations inefficiently. But cursive can help them with the decoding process because it integrates hand-eye coordination, fine motor skills, and other brain and memory functions. In this way, persons with dyslexia can learn better. The researcher and language specialist suggests that when people write things they remember them longer.

While learning to write in cursive, children constantly look at the continuous movement when they are writing in connected letters. This is where their hand-eye coordination gets enhanced. It also makes them understand the difference between the connected cursive and the single-stroke seemingly separate print fonts.

One of the symptoms of dyslexia is letter reversal or mirror-writing, which means that a child tends to write the letters upside down or backward sometimes, corresponding to their shape. By practicing and writing in cursive, the continuous and looped way of writing will familiarize letters, further preventing them from writing letters backward, upside down, or in an inverted manner. It will also help differentiate between similarly structured letters.

1. The type of paper

In the early stages of learning cursive writing, it is a good idea to use rule paper. In fact, initially, even double-lined paper can be used. This would help writing in a structured manner. Since cursive writing is continuous and connected, it is suggestible to write on ruled paper so that while maintaining the flow, the linearity is not neglected.

Maintaining an upright and straight posture, yet comfortable is essential for a good cursive handwriting flow. Depending on whether the child is left-handed or right-handed, a position in which the hand is placed well on paper and works easily should be ensured.

Helping children with dyslexia strengthen their grip for holding the pen or pencil appropriately while writing will improve their handwriting significantly. The tripod grip allows the fingers and wrist to move freely without putting much pressure on the hand.

Since practice is key, it is important for children to attempt writing in cursive every day. Practice and consistency will be vital to improving handwriting in cursive. Everything is reinforced with practice such as the grip, the formation of letters, the recognition, and the differentiation between letters. For this, there are numerous resources available online.

The British Dyslexia Association has developed a Sound Check booklet for helping children with reading, spelling, and writing.

Dyslexia is the inability to read, write or spell properly. Often, children with dyslexia face difficulties in reading out aloud, take long pauses while reading very simple words, and are unable to spell and write even three-letter words and spell words appropriately.

Studies have found that cursive handwriting can turn out to be very helpful for affected learners to improve their reading and writing skills. It has proved to improve hand-eye coordination, recognition of letters, memory, speed, and letter reversal or mirror writing.

Practicing writing in cursive consistently can significantly improve certain symptoms of dyslexia and help children further their educational skills and knowledge. Those with dyslexia seem to benefit from cursive writing in many ways as discussed