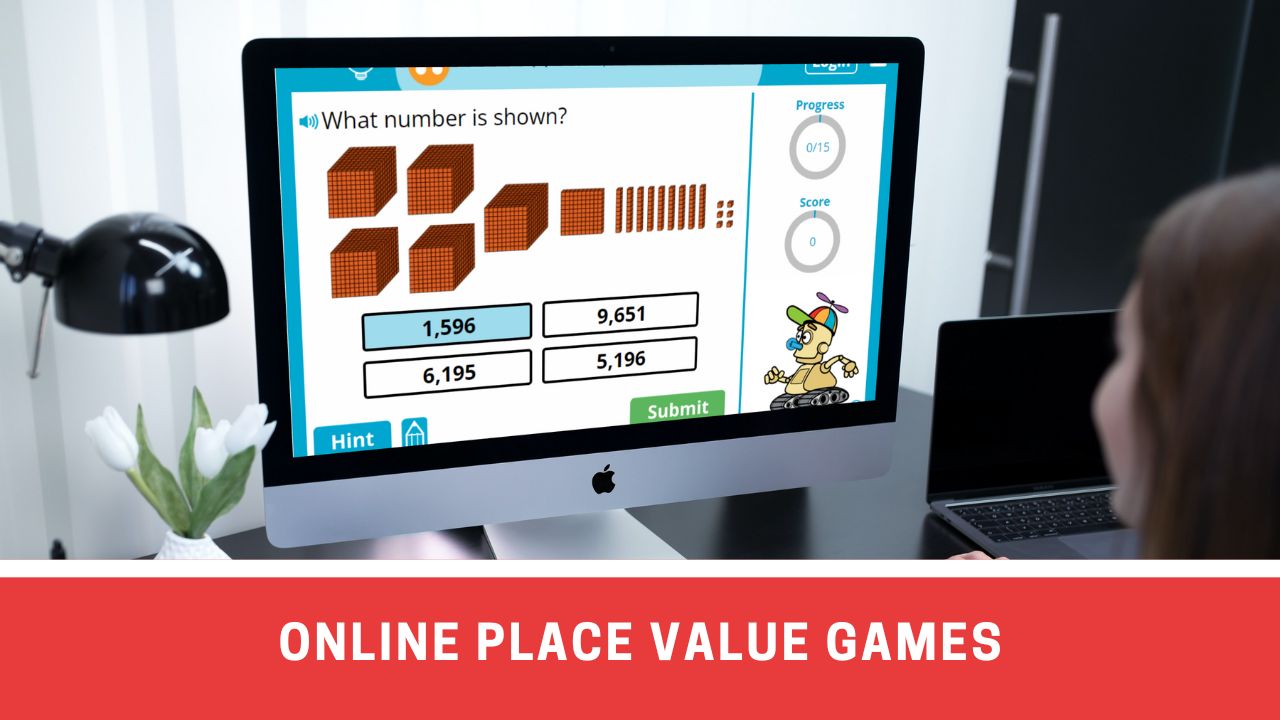 Place value is a very important foundational concept that represents the value of the digit in a number. Although it is hard for children to grasp this concept immediately, there are many ways that the children, parents, and teachers can make it a fun learning concept. This could include online games, different types of teaching methods that involve visuals, or even letting the children try to make decisions with assistance initially and without help gradually.

To make the children familiar with the concept, the parents could explain the price of a chocolate bar in tens and ones to them whenever they visit a store.Then, the next time they could ask them to go to the counter and pay for it themselves.

Thanks to the era of digitalization and the world of the internet, almost every aspect of knowledge and even skill to some point can be learned online in an engaging and visually attractive manner.

Here, given ahead is a list of curated online games that can help understand place value.

As we know, understanding place value is essential, and online games can be one way of ensuring a fun learning experience for it. Research has shown that children who engage in games for the purpose of learning have a better understanding than those who only focus on theoretical resources.

Playing a game to understand a concept will not only keep the child engaged but also keep them hooked to it and also create an enthusiasm and excitement about learning. Games provide an atmosphere for healthy competitiveness, which creates a significant amount of motivation in children to do well.

Learning through games also promotes creativity. They involve the child in the images and visually pleasing designs that lower the barriers of general learning rules and routines used for teaching and learning. Games often offer amazing animation, colors, and high-end graphics that grasp the child’s attention.

Playing a game for place values would enhance the learning in a way that would make the foundation of its concept strong. This is because for every step they move ahead in the game, the underlying concept is being reinforced. If children like the process of learning, it is more likely that they would remember and apply what they learned in it in real life.

Online games can be beneficial for kids in their own unique ways. Imagine the kids on a holiday, busy playing games but at the same time learning volumes from them. Here are some online place value games to help your little learner master the concept.

1. Guess the number from the place value.

This game helps identify the place value of digits in various numbers and builds a better understanding of how the digit can represent various place values in different numbers by being in different places.

This game is based on base-10 blocks. In the beautiful setting of a lake and the sky, various base-10 blocks would appear. The prompt will be asking the user to tell which number is shown by the base-10 blocks. The player has to look at the base blocks given and form a number by them. There will be 4 ducklings in the water with different numbers on it and the user has to choose the one with the correct answer!

Shark numbers teach place value with the help of base 10 blocks. By choosing the desired level of difficulty, kids need to observe the blocks of the hundreds, tens, and ones to work out one of the numbers shown in the options. players then have to select the bubble with the right number. If you are right, a dolphin will leap over your boat, if wrong a shark will take a bite of your boat.

This game can be played to build a foundation of place value concepts while introducing the concept to them. It can be very helpful to make them learn the value of hundreds, tens, and ones in a visually appealing manner.

In Place Value Pirates, learners use their place value skills to dispatch the wretched pirate Sir Francis and his horrible band of pirates. The game involves reading the prompt that appears on the top asking what number has the digit mentioned representing the mentioned value. All you need to do is now click on the pirate that matches the prompt.

The focus is on choosing the right number with the digit at the particular place value it is representing, enhancing the concept of place value and how digits represent different values. This game has the option to practice place value of decimal numbers which makes it a must-play game for little learners.

This is another game that’s based on identifying the place value of a given digit. The most exciting part about this game is that the more right answers you get, a puzzle on the side keeps disclosing. This creates curiosity and thus a stimulation to keep getting the right answer.

To play this game, click on the digit in the number whose position is shown. On answering correctly, a small part of the puzzle will be disclosed. As you answer more, the puzzle will keep getting disclosed and the level will be crossed once it is disclosed entirely.

In this game, blocks of thousands, hundreds, tens are given which makes it very fundamentally easy for the child to brush up their place value skills. The player has to consolidate the number through place values and blocks and choose the correct answer. This game shows numbers up to ten thousand so it can be played when there is a foundation of the concept established.

To play this game, look at the bricks of thousands, hundreds, tens, and ones given. Work the number out and choose from the options. After choosing the answer, the next prompt will appear.

This game gives the actual feel of playing basketball to the students due to which they are able to retain their focus all the while learning the concept.

Bead Numbers is a place value investigation game involving a tens and ones abacus. This game stimulates the underlying critical thinking skills of the user as it does not employ a direct approach. In this game, the kid needs to first select how many beads to work with from 1 to 9.  Arrange the chosen number of beads on the abacus spikes to find all the different numbers which can be made, and enter each number using the keypad on the right.

Through this game, kids can comprehend that the same number can have different place values due to which formation of unique numbers is possible.

This is a unique game. In this game, the players would have to make the numbers from lines of hundreds, tens and ones given in the form of a chart. For this game, a number on the top will appear with the prompt- make the number. There will be three lines with hundreds, tens, and ones. From each line, choose the box with the correct value that would make the given number.

This will help then understand and bifurcate the values well. This game allow learners to comprehend, say if 657 is given then it formed with 600 (hundreds) + 50(tens) + 7(ones)

Place value blocks can be played to hone the understanding of place value and two digit numbers. This is a game that can be used to explain the concept of how the numbers are formed and how they take different place values visually while introducing the concept.

Playing this game is easy; first count up the numbers of tens blocks and the ones blocks that appear. Drag the correct numerals into the tens place and ones place to create the matching two digit number that appeared on the screen. By employing the use of base 10 blocks, kids can easily understand that why we call place values as “tens” or “ones”.

Place value is very essential to understand in the initial learning years. A lot of students, teachers, and parents struggle with making this a fundamental concept, fun and easy one. For the same, online games can be incorporated as a mode of learning.

Games are a sound approach where learning is enhanced through innovative ways. While making learning enjoyable, place value skills can be practiced in a stress-free manner. Games also create a healthy competitive environment which facilitates a sense of motivation and excitement to learn. Games also promote creativity and grasp the attention of children with their visually pleasing graphics that make the child want to learn. The more fun and desirable the learning is, the more concrete will the understanding be.