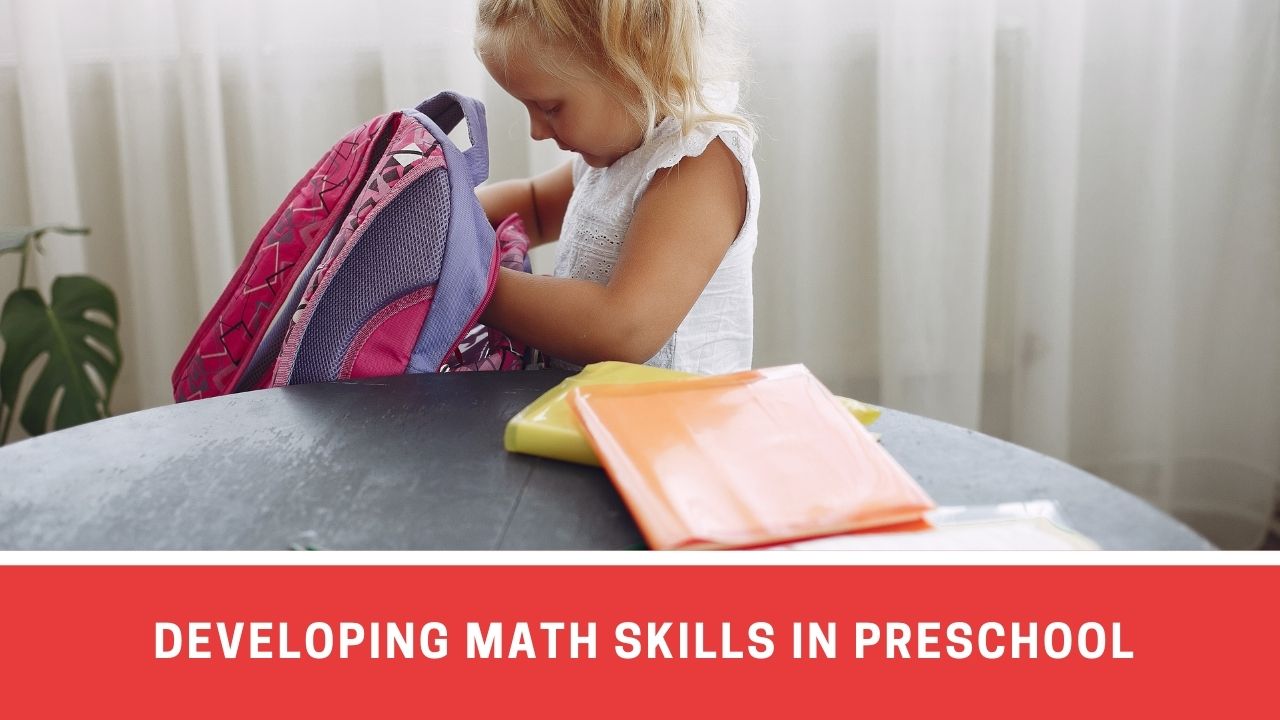 Preschool Math concepts are the skill set on which the foundation of future proficiency in mathematics of children, who are yet to enter the formal system of education, is based.

In fact, the Glenn Commission, 2000 believes that the children, who will be the decision-makers of the future, need to be equipped with adequate mathematical and scientific tools from the very start in order to allow them to capitalize on the varied challenges and opportunities that are in store.

Development of the skills for preschool Math Concepts, thus, is based on multiple factors. Some of them, of course, are individualized to a child in form of the working memory and attention span (Passolunghi and Costa 2016) as well as the child’s innate abilities (Butterworth, 2005). However, adequate early attention to mathematical concepts can help develop numerical abilities in even children who are slow starters in a particular area.

There are multiple pre-school concepts that help a child develop an analytical and mathematical bend of mind. Many of them are overlapping and gradually progress from simple to complex. These preschool math skills help the child perform everyday activities as well as playtime games. Children thus unconsciously learn to use these rudimentary mathematical skills to develop their cognitive skills and embark further on their growth curve.

These preschool math concepts are:

Counting is the simplest of preschool mathematical concepts that is a kick-starter to most of the other concepts. It includes rote counting, which is simply learning to recite the number series from the memory. With time the child also needs to be initiated into the practice of rational counting, which is assigning meaning to the numbers and thus being able to count a specific number of items.

Number sense is the gradual development of understanding of the concept of numbers by the child, where they understand that four apples are present in the basket, and if they eat two of them, only two will be left.

READ :   What is Surface Dyslexia: Its Signs, Examples, and Management Strategies

Slowly, the pre-kindergarten child starts comparing things. In this process, they develop an elementary mathematical vocabulary. For example, they learn to compare between items which are ‘heavier’ or ‘lighter’; ‘more or ‘less’ and ‘singular’ or ‘in groups’.

This comparison helps them understand the concept of quantity and magnitude.

Understanding patterns and repetitions in a group of things as well as being able to assemble similar or separate items in pairs is another important pre-school math concept skill.

The ability to comprehend the pattern, thus, also helps the child in putting in order various items and thus understand the art of compilation of items and segregation of the rest.

A basic understanding of geometry and the ability to identify the various shapes is another preschool math ability that should be inculcated in young children.

Also, it is important for them to develop a spatial sense, which is the ability to place items in their correct places. Thus, it also requires them to understand the basic concepts of patterns and the importance of shapes in such placements.

The pre-schoolers also need to develop basic math terminology of numbers and comparison before they enter a formal system of education. This helps them cements their basic math skill and also allows for it further growth through communications and discussions.

These are required to ensure that the child has indeed grasped the basic concepts of mathematics and is able to cross-reference between the various concepts.

It is important for parents or guardians to keep a close eye on the development of pre-school math concept skills in children and to give the extra push in areas in which they may lag behind.

Some tips and techniques to nurture and enhance preschool math concept skills in children are:

Ask your child to observe details of various household items like their shape and number. Then slowly introduce them to mathematical and geometric terminology like ‘singular and pair’; ‘circle and ‘square’; ‘heavy and light’, etc.

These observation and terminology recognition skills will form the basis of their preschool math concept skills.

2. Start the counting and comparing

There are various ways to make this task interesting. You can the songs with numbers or dance to a number routine to make rote counting a fun task for your child. You can also make it a group task with each child reciting the next number in the series while passing the ball.

Slowly, you can help your child understand the meaning and significance of these numbers by comparing them to various household items like 1 apple, 2 bananas, and 3 boxes of cookies.

3. Participate and pattern with puzzles

You can use various shape puzzles which require the placement of various shapes in their proper places. This helps the child develop a certain spatial sense as well as start comprehending various patterns.

You can also play various pattern games by asking the child to arrange colored beads in a specific order of colors or pairing two kinds of cookies in a repetition series.

Slowly, you can extend this to various items in a clutter box-like beads and buttons ask the child to separate them into separate piles on the basis of shapes, colors, and sizes.

Let your child construct a lego tower and pillars. This will make them understand that certain items are required in a specific number and shapes.

Constructing and deconstructing mini buildings will help them understand how parts combine to become a whole and the whole can break into parts-thus introducing them to the wonderful concept of fractions.  It will again enhance their observation skills and spatial sense, as well as improve their geometric abilities.

In fact, as an added advantage, it will also fine-tune their motor skills.

Get a large, colorful calendar and mark the important dates with stars on it. Then ask your child to marks the calendar with specific symbols when it rains or when their friends come over.

In this way, the child develops a sense of time and dates and learns to form correlations between various items.

You can also sharpen their cognitive skills by relating the weather to certain activities. For example, when it rains, you put on a raincoat and when it’s too hot, mummy makes a cool glass of lemonade. These correlations are the beginning of the development of logical thinking in children, which is so important to the disciples of both science and mathematics.

6. Make it a part of the daily ritual

Developing pre-math school skills in your child should become a part of your daily routine. As you take them out for a walk, count the number of houses on the way.

When you are baking cookies together, ask them to pass three cups of milk and 4 cups of flour. When they are putting on their shoes, teach them that all shoes come in pairs while belts and hats are singular items to be worn.

This way you can help expand their knowledge subconsciously, without indulging them in planned lessons.

The development of a child from infancy to school-going age is a relatively fast-paced process. Hence, the right physical, emotional and intellectual development of the child in this phase is of paramount importance (YaopaDechacoop, 1999).

Croft and Hess, 1985; too emphasize that it is important that preschool children, from 0 to 6 years of age are introduced to math concepts in their daily routine and through creative art challenges so that they are also able to insert and integrate them with other subjects, which will also ascribe them to an opportunity to find the truth and understand the concept of things (Boonprachak Wongmonkol,1993).