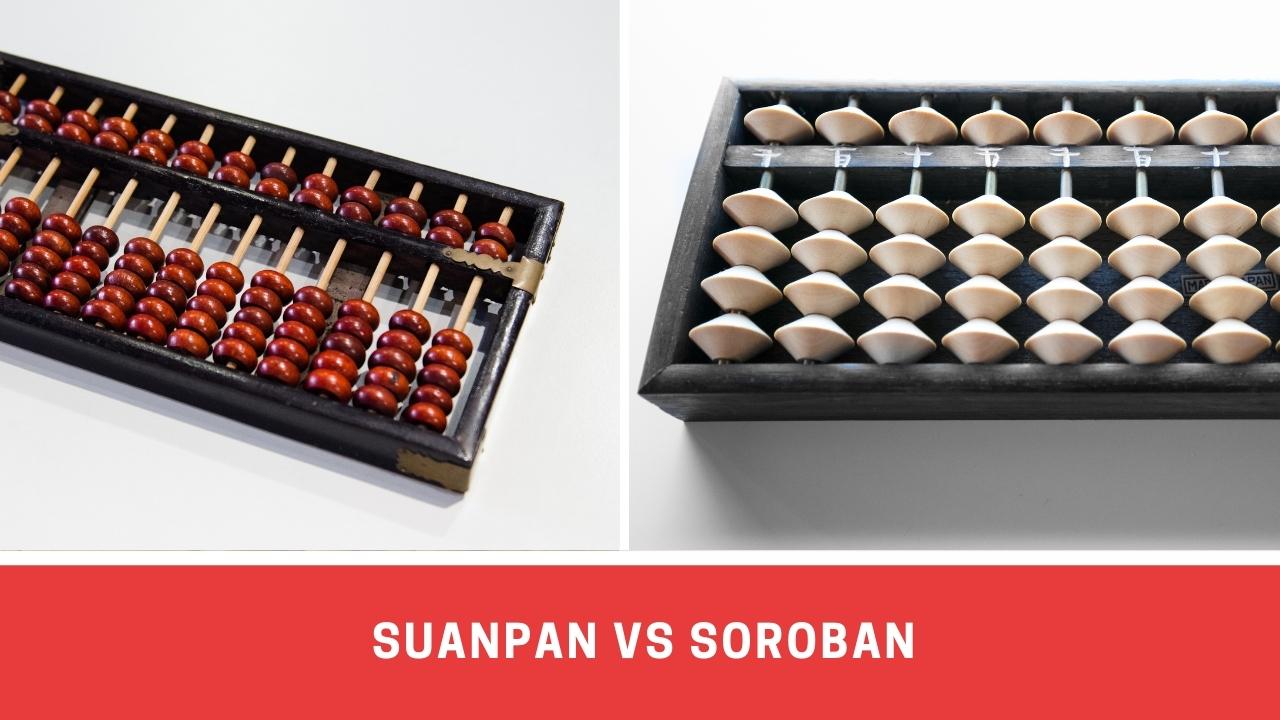 Retaining a mind-honing reckoner in hand is just like possessing a top-notch bat ready to hit the ball.  While there are a handful of options, Abacus can be pre-eminent due to its key role in improving creativity, accuracy, and concentration in kids. Nevertheless, several sorts of the abacus can make you bewildered to choose one among them. While Suanpan and Soroban can be two prominent choices to go for, choosing the best abacus can be still taxing. That being the case, we will pass on pivotal insights of these picks that can assist you in your expedition to choose the right one.

Suanpan and its engaging antiquity

Suanpan is a Chinese version of the abacus which was first chronicled circa 1200 C.E. in China. The word “Suanpan” literally means “calculating tray” or “calculating disk” It was described in a 190 CE book of the Eastern Han Dynasty, namely Supplementary Notes on the Art of Figures written by Xu Yue. Usually, the device was made up of metal and wood reinforcements – on each rod, the classic Chinese abacus has 2 beads on the upper deck and 5 on the lower deck. This type of abacus is also called 2/5 abacus in which 2/5 style survived unchanged until 1850, at which the 1/5 (one bead on the top deck and five beads on the bottom deck) appeared. Nevertheless, the precise design of Suanpan is not known.

Suanpans are used for their functions apart from counting. Several systematic suanpan techniques have been made to do multiplication, division, addition, subtraction, cube root, and square root operations at high speed making it a handy calculator.

Being originated by greek, the computing device is believed to introduce to others like Roman and China As a part of the trade. Similar basic principles behind several abaci may lead us to these inferences. The old version of the Chinese Suanpan has 5 plus 2  configurations. This means the upper section has 2 beads in a rod, and the lower one has 5 beads. This arrangement stipulates facile arithmetic algorithms, unlike the Roman and Chinese models with 4 plus 1 bead per decimal place. It is known that the beads of the Roman model run in dedicated grooves instead of running on wires as in the Chinese and Japanese models. The arrangement of beads on the rod makes suanpan easier to operate

The implementation of Suanpan was evident probably till the recent items, These are still employed as secondary calculators in some schools. Being in application till the 1990s in China, Hong Kong too believed in its accuracy and employed till 1960s.

Suanpan was a better option than basic calculators till the recent past. This abacus could make complex calculations easy with precision, which made them still in use in various parts of China despite modern handy calculators. The demand for after-school abacus classes depicts the cultural bond that people have with this abacus. Further, these can also be implied in complex arithmetic notions too.

Comprehending the antiquity and present-day edges, you may be enticed to infer various benefits:

Soroban and its fascinating antiquity

The Soroban (known as a counting tray) is an abacus developed in Japan; derived from the ancient Chinese suanpan, it was imported to Japan in the 14th century. After the technique was introduced, Japan happened to enter a long period of peace, fostering the development of its cities and commerce.

READ :   Differences and Similarities Between LRE and FAPE

Soroban basically has the same operations and methods of addition and subtraction that of a Suanpan, with simple addition and subtraction making use of a complimentary number to add or subtract ten in carrying over. Soroban had several methods to perform both multiplication and division, especially methods of China which arose with the importation of the Suanpan. The Japan Abacus Committee has recommended so-called standard methods for both division and multiplication that aim to use only the multiplication table; these methods are then chosen for efficiency and to check the speed in the calculation.

In school, for over 500 years, the Japanese abacus has been taught and is significantly rooted in the value of learning the fundamentals as some form of art. After the introduction of the West after World War II, the Japanese education system gradually altered. As calculators have replaced the Soroban, elementary schools are no longer required to teach students how to use Sorobon; only a few do so out of choice.

But today, Soroban is still being taught in primary schools as some way to visualize and tackle mathematical concepts. There is a practice of Soroban where the teacher, in a song-like way, recites a string of numbers (addition, subtraction, multiplication, and division), and in the end, she ends up giving the answers. This procedure reflects an element of Japanese culture of practicing meditative repetition in every aspect of their life.

READ :   12 Real-life Examples Of Permutation And Combination To Understand The Concept Better

Plumping for a befitting abacus

Comprehending the level of complexity in operations and estimations, Suanpan and Soroban are evidently distinct. While Suanpan can aid in advanced arithmetic operations, Soroban can be an easy in-hand calculator. Suanpan is still in use in China, while Soroban is employed in some areas including Japan. Despite applications of these are evident in some areas, there can be several other factors that may lead to the right choice. Choosing a 5:2 or a 4:1 configuration can be entirely the choice of the individual, exploring the above insights can come in handy in this search. Let us mark out differences in layman terms for your better understanding:

Suanpans and Sorobans have their own significance and relevance throughout history; they have been the primary accounting tools for centuries of traders and businessmen and are still in active use today in many Asian countries. Both of these tools can be very interesting and fun to improve on your calculating abilities; they are also the best medium through which one can teach their children about numbers. Considering the current global condition, the abacus is also very economical and environmentally friendly and can help reduce one’s reliance on technological batteries and digital calculators.