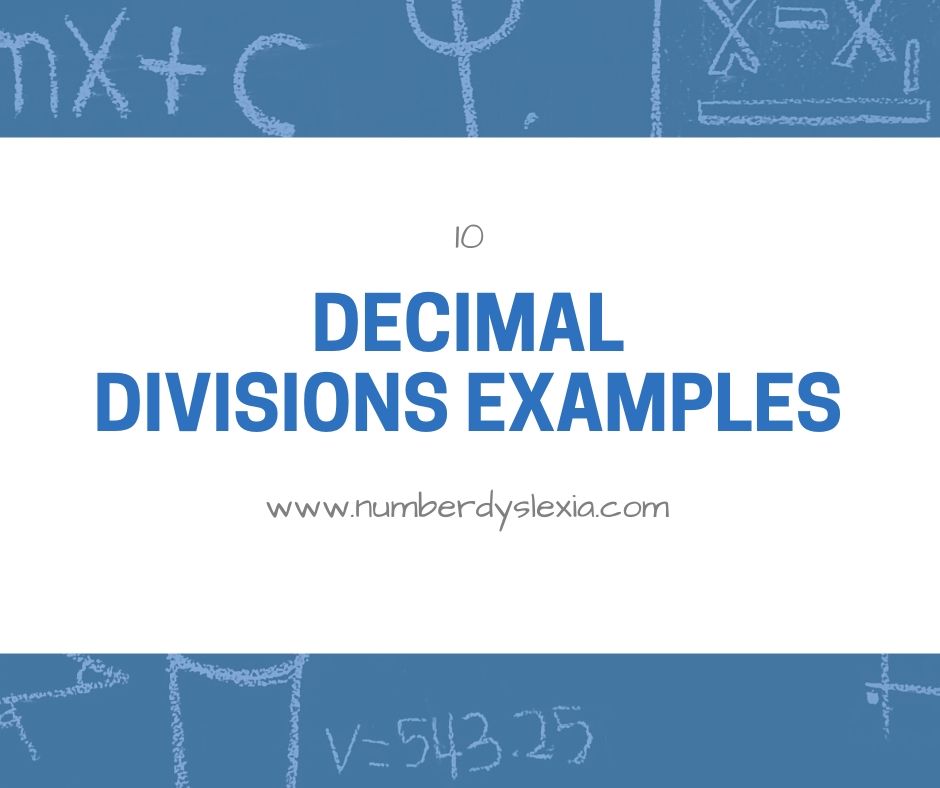 In this post, we will talk about decimal division by showing various examples for easy understanding. Let us learn a little about the topic first.

As the name suggests, the topic deals with the division operation of numbers in decimals. Things get a little confusing for kids when decimals are involved. Don’t worry, through this post you will learn some good techniques to deal with decimals.

We also talked about easy approach to solve such operations with appropriate examples. Not only school exams, if practiced well in routine, it will be helpful in competitive exams where timing is everything.

Dividend is whole number, divisor is in decimals

A typical way of doing such examples is to multiply both dividend and divisor by power of 10 as the decimals. If there is one number after the decimal point, we will multiply the divisor by 10. This way we get whole number as divisor to divide dividend.

Following this we get,

Next, we will divide it with the usual way.

Here, there are two numbers after the decimal point in divisor, so we will take the 2 power of 10 i.e. 100. This way we will multiply the divisor and dividend by 100. We get:

Next, we will divide the usual way.

Divdend is in decimal, divisor is whole number

Ignoring the decimal, first we will divide 1344 by 4

Next, we will put the decimal point in the quotient directly above the dividend 134.4 . The answer is 33.6

Again, we will ignore the decimal point and solve with long division method

After getting the quotient, we will put the decimal point as told earlier.

Both dividend & divisor is in decimals

When both the dividend and divisor is in decimals, we will focus on decimal of divisor. We will make the divisor a whole number.

After this step, we will use the same method we used for example 3 and example 4.

Next, we solve with long division method.

Next, we solve with long division method.

Here, we still left with decimal of dividend. Use the long division as we used in example 3 and 4.

While dealing with decimals, it is always advisable to make the question as simple as possible. Simplifying it in a way you’re comfortable with. In the next section, we talked about possible ways of doing it.

Do note that there is no fixed method of doing it. Its different for different types of problems of decimal operations. The main idea is to follow an approach with which you’re comfortable with. Lets have a look at some of them

This one is probably most common approach used to do decimals division faster. We write the division operation in the fraction form and cancel out the decimal as per its position. Keep simiplifying the form by dividing both numerator and denominator with common multiple.

Write down the operation in fraction form. It will look like 94.5/1.5.

Next, we will simplify as per the diagram.

Sometimes we multiply both numerator and denominator other than 10 to make things easier. The approach here is to convert it into a form with which we are comfortable as we done it quite a few times already.

One thing common between the numerator and denominator is that both are multiple of 7.

Next, we will divide 14 with 2 to make it 7. Similarly we divide 63 by 2 to balance it. All this can be written in fraction form as given in the image. Further we simplify the operation and get the answer.

Lets follow the same above approach to solve the case of ‘Dividend is whole number but divisor is in decimals’.

The reason why we choose to multiply by 2 because divisor becomes 9, and as we know 387 is divisible by 9, the calculation become alot easier. If we choose the multiplication with 10 route, the fraction becomes 3870/45 which requires a bit of calculation.