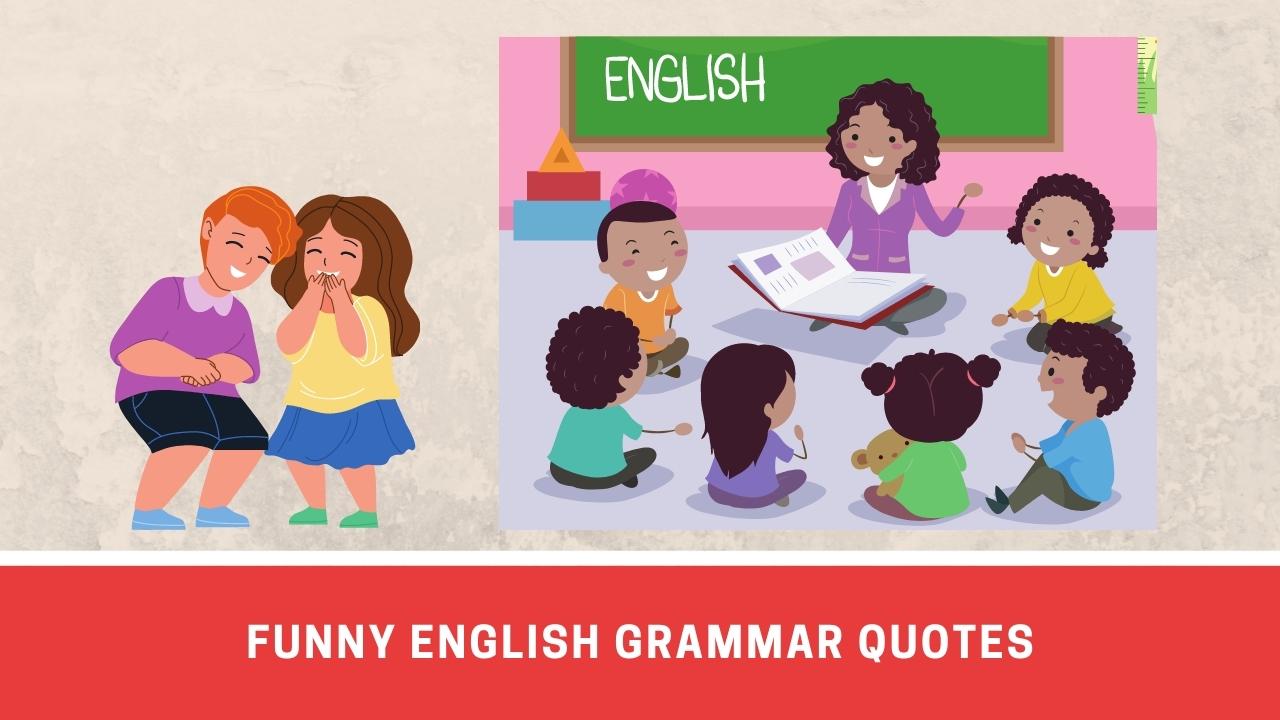 Placing inspirational quotes on posters in your classroom is a pre-eminent way to pump some positivity into the kids. Funny quotes, however, are even more popular with students. This helps to create a cheerful atmosphere among students.

Grammar, in many ways, is the foundation of our language. Learning the language is the building block for speaking and writing in a way that is universally understood. From elementary school itself, children begin learning grammar.

However, the way we use language in our daily life and the change of modes of communication can weaken the understanding of grammar in students. But, there are a plethora of ways to bring back that zeal and vigor in the students. One of them is Quotes!

In this post, we will dig deeper into 50 quotes that will motivate and encourage the little learners to revitalize their grammatical skills.

Funny quotes about the grammar use

1. “I never made a mistake in grammar but one in my life and as soon as I done it I seen it.” – Carl Sandburg

3. “If the English language made any sense, lackadaisical would have something to do with a shortage of flowers.” -Doug Larson

4. “I might not use capital letters. But I would definitely use an apostrophe…and probably a period. I’m a huge fan of punctuation.” ― Rainbow Rowell

6. “ A man’s grammar, like Caesar’s wife, should not only be pure, but above suspicion of impurity. – Edgar Allan Poe

7. “Frankly, I wonder who Frank was, and why he has an adverb all to himself.” ― Jodi Picoult

8. “I like the word ‘indolence.’ It makes my laziness seem classy.” – Bern Williams

9. “The two most beautiful words in the English language are ‘check enclosed.’” – Dorothy Parker

10. “If the English language made any sense, a catastrophe would be an apostrophe with fur.” – Doug Larson

11. “‘I am’ is reportedly the shortest sentence in the English language. Could it be that ‘I do’ is the longest sentence?” – George Carlin

13. “English grammar is so complex and confusing for the one very simple reason that its rules and terminology are based on Latin, a language with which it has precious little in common.” – Bill Bryson

15. “The nine most terrifying words in the English language are, ‘I’m from the government and I’m here to help.’” – Ronald Reagan

16. “In my sentences I go where no man has gone before… I am a boon to the English language.” – George W. Bush

17. “And all dared to brave unknown terrors, to do mighty deeds, to boldly split infinitives that no man had split before–and thus was the Empire forged.” ― Douglas Adams.

20. “Drawing on my fine command of the English language, I said nothing.” -Robert Benchley

21. “When I read some of the rules for speaking and writing the English language correctly, I think any fool can make a rule, and every fool will mind it.”– Henry David Thoreau

22. “Ill-fitting grammar are like ill-fitting shoes. You can get used to it for a bit, but then one day your toes fall off and you can’t walk to the bathroom.” ― Jasper Fforde

23. “I really do not know that anything has ever been more exciting than diagramming sentences.” ― Gertrude Stein

24. “The English language has a deceptive air of simplicity; so have some little frocks; but they are both not the kind of thing you can run up in half an hour with a machine.” – Dorothy L. Sayers

25.  ” My wife is funny. And I dabble in it. So being funny is big around our house. But what’s surprised me is my daughter can do an English accent. I don’t know how she learned this. “-Jerry Seinfeld

26. “Opera in English is, in the main, just about as sensible as baseball in Italian.” – H. L. Mencken

27. “Never make fun of someone who speaks broken English. It means they know another language.”– H. Jackson Brown, Jr.

28. “There’s a fine line between funny and annoying – and it’s exactly the width of a quotation mark.” ― Martha Brockenbrough

30. “Some writers write to forget. Some forget to write.” ― Mokokoma Mokhonoana

33. “Despite centuries of English literature, the most famous split infinitive in all of history comes from Star Trek.” ― R. Curtis Venture

34. “Even though being a good speller has lost its ranking in school, we can hope there is one group of artisans that still finds spelling important…the tattoo artist” ― Nanette L. Avery

35. “Punctuation marks are like road signs; without them we just may get lost…” ― Nanette L. Avery

37. “Use exclamation points sparingly, you don’t want to give someone a heart attack!” ― Nanette L. Avery

39. “Q: Why should you never date an apostrophe? A: They’re too possessive” – anonymous

40. “Saying ‘I’m sorry’ is the same as saying ‘I apologize’. Except at a funeral.” —Demetri Martin

42.”When I was young there was only 25 letters in the Alphabet? Nobody knew why”- Anonymous

44. Q: What do you call Santa’s little helpers? A: Subordinate clauses – Anonymous

45. “And while we’re on the subject of ducks, which we plainly are, the story, ‘The Ugly Duckling’ ought to be banned as the central character wasn’t a duckling or he wouldn’t have grown up into a swan. He was a cygnet.”― Russell Brand

46. “Thurber was asked by a correspondent: “Why did you have a comma in the sentence, ‘After dinner, the men went into the living-room’?” And his answer was probably one of the loveliest things ever said about punctuation. “This particular comma,” Thurber explained, “was Ross’s way of giving the men time to push back their chairs and stand up.” – Lynne Truss

49. “What is the shortest word in the English language that contains the letters: abcdef? Answer: feedback. Don’t forget that feedback is one of the essential elements of good communication.” – Anonymous

Can quotes help us realize the gravity of grammar?

A student’s journey towards realizing the importance of grammar is enhanced by quotes in various ways.

Do you relate to these grammar quotes? Teachers can share such quotes with the children to see how much they relate to them. When they feel low about studying grammar, such quotes will make them laugh and, at the same time, make studying grammar look much easier. It boosts their confidence and gives them strong morale. Teachers and educators can get these quotes printed and stick them to the wall of the classes, or each student in the class can read one quote so that each of the students pays attention to all of them. Quotes can be looked at as words of wisdom, as just in a few words, they convey their message so strongly that it casts an impression in the minds of an individual forever.