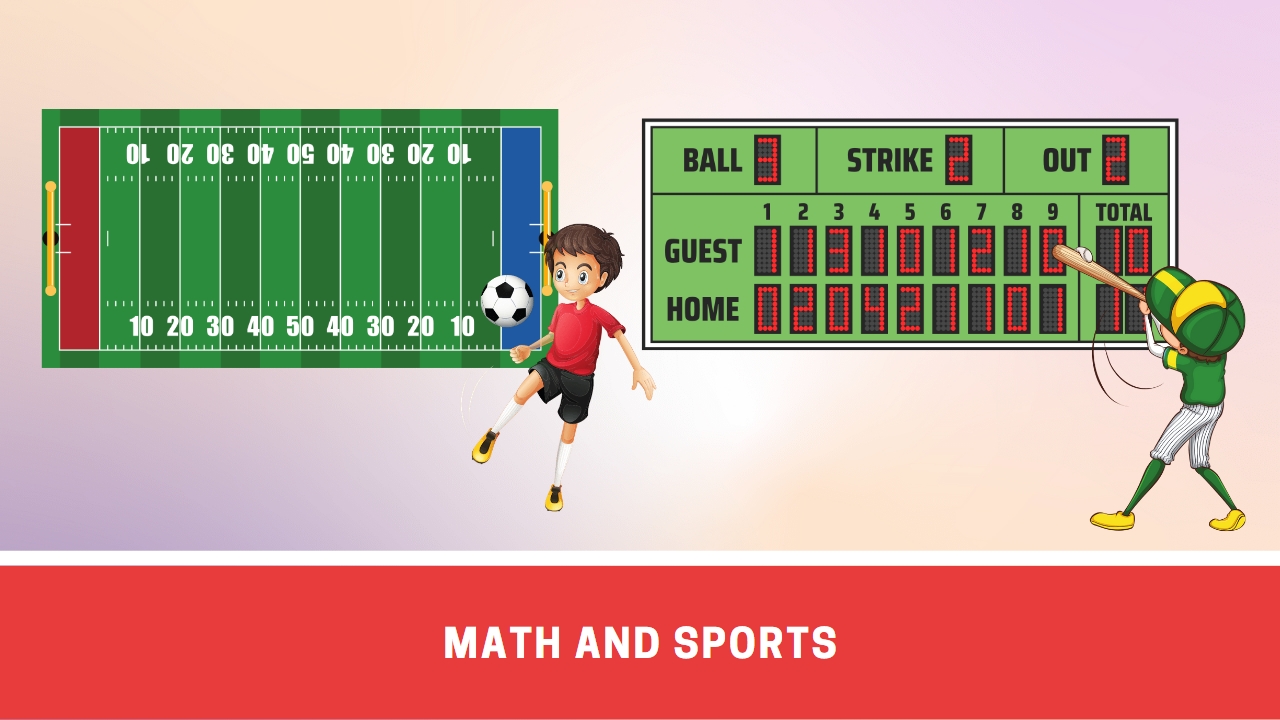 Math is a prime subject that enables children to start with counting, understanding numbers, and creating a relationship with math in everyday life. Right from grocery shopping to bill calculations, math is used from an early age. While, math is generally introduced through books, math board games, and various manipulatives, It becomes significant to offer children knowledge about its usage and application across industries such as sports.

When children are exposed to the usage of math in sports, they are more inclined to understand it. Even athletics can’t avoid math as technology to gauge and enhance performance gains momentum. Right from the usage of geometry to identify angles in football to the usage of statistics in scoring, math is widely popular in different sports games. However, teaching math can be a challenge. Hence, parents and teachers can use sports as a medium to teach certain mathematical applications of the subject. Similarly, children can also apply the knowledge while playing baseball, football, or tennis during their playtime.

Math and Sports: What’s the link?

With recent technological advancements, math has assumed a greater significance in sports. Sports use math for a variety of purposes, including average point calculations, goal scoring, winning scores, leaderboard creation, strategy development, and probability calculations. For the purpose of analyzing a basketball game, statistics are crucial. Statistics can be used to identify a player’s unique strengths and shortcomings.

If you consider diving, an athlete needs to be symmetrical and learn how to distribute their body weight in order to flip and spin successfully. Inertia is a notion used in mathematics. Athletes also exhibit a wide range of other traits. Hence, various mathematical concepts including statistics, data analysis, geometry, and trigonometry are used in different sports played across the globe.

Math concepts & sports: Know how they are interconnected

Right from booking a ticket for your favorite match to actually attending it, a lot of math is used in the process. However, it becomes tricky to understand the concept without realistic examples. Check how Math and sports are interconnected through relevant references.

1. Watch the game of Basketball

Did you know the popular game of basketball is based on pure math? Basically, basketball players apply numerous geometrical ideas when playing a game. That’s how geometry comes into the picture while playing it. The dimensions of the basketball court are the most fundamental mathematical concepts. Any basketball court is bound to follow conventional measurements for the ball’s diameter (9.4 inches), the hoop’s diameter (18 inches), the court’s width (50 feet), and the distance from the three-point line to the hoop (19 feet).

To get the ball through the hoop when shooting from behind the free throw line, a narrower angle is required. That is when the study of angles is used in the game play. A wider angle is required while performing a field throw. Hence, study of math enables players to accurately understand the game and plan the throw.

2. Have you seen the Baseball game?

Interestingly, the game of baseball also uses fundamentals of math. Let’s talk about baseball pitching and hitting. The pitcher intends to strike out the batter by throwing the ball. The leading player still has at least three more chances to hit the ball if his throw is too high or too low since it is a ball.

Similar to this, the hitter aims to hit the ball as far away from the other players as he can. However, the player also needs to take into account the ball’s speed and height in order to toss it correctly. Hence, the mathematical concepts of height, speed and frequency have to be studied in order to understand and play baseball.

Sure that football amazes you while you watch the goal! Each football play consists of a calculation of either yardage gain or loss, which results in a negative or positive number. To determine how far the offense has come on the field, players need to total the yards gained with each pass or run that they attempt. Penalties must not be overlooked when understanding math usage in football.

They may have an impact on both the offense’s and the defense’s total number of yards. It seems like there will be enough practice with addition and subtraction! A team must advance 20 yards to score if they are approaching the opponent’s end zone from the 20-yard line. What if they only gain 10 yards, though? On the field, where are they? within ten yards! Therefore, the game’s gains and losses can be represented by addition and subtraction, respectively.

4. Watch that Six in Cricket!

As interesting as the game of cricket looks, it also uses too many mathematical concepts. The number of runs scored per 100 balls over a batsman’s career is known as their striking rate. The number of balls it takes a bowler to get a wicket is referred to as strike rate. The ratio of runs to balls faced is used to calculate a batsman’s strike rate.

With the usage of mathematical calculations, the team’s runs are recorded. By adding up the runs a bowler has delivered in an over, one can calculate the bowling economy. Math is used to determine a bowler’s bowling velocity. Hence, mathematical concepts of frequency, addition, subtraction and statistical data are useful in the game of cricket.

READ :   Importance Of Feedback In Education

Counting is one of the most evident mathematical ideas in tennis. Tennis has a unique scoring system because points are not awarded in increments of one or even in multiples of the same value. Hence, it becomes prominent for players to understand the mathematical scoring system for evaluation. There are various scoring scenarios that occur during a tennis match.

Players often use statistics to determine their own strengths and weaknesses as well as their opponents’ vulnerabilities, which can help them plan their strategy and tactics for upcoming games. Players are typically compared using percentages. Tennis players frequently display the following statistics including games won, break points saved, second-serve return points won, break points converted, forehand winners and many more.

Did you know the tactics of martial arts also need mathematical calculations? The usage of angles is one of the first things a martial arts student will notice during training. Angles help players plan their moves according to their opponent’s strategy. The 90-degree angle and the 45-degree angle are often utilized in martial arts. Triangles and squares are two geometric shapes that visibly display these angles.

Practically, the 90-degree angle would be exactly in front of the players, to their left and right, and directly behind them when viewed in relation to their position (in a fight, for example). The corners, two in front of the players and two behind them, would be at 45 degrees. Hence, the study of angles becomes prominent when understanding the sport of martial arts.

7. Fusion of Golf and Math!

Did you know the game of golf consists of various mathematical concepts? In order to account for differences in the physical mechanisms involved in striking a ball with a club, evaluations of golf equipment typically incorporate modeling, simulations, and statistics. Math is frequently used to set restrictions on golf equipment, including limiting the distance the ball can travel based on mathematical models.

The human factor is arguably one of the most difficult aspects in modeling the physical processes involved in golf. The variability of a person’s swing has been attempted to be quantified by analysts using a variety of statistical techniques, including standard deviation and median deviation. Acknowledging the player’s variability is also essential for providing players with the appropriate equipment, among other things.

Is math only used while the game is on? Know what’s beyond the sport

While mathematical concepts are used in sports, it is not just the game where math is used. A lot goes behind the game including planning, arranging, scheduling, and ticketing. Even the arrangement of players, checking the weather forecast, and selecting the location for the match include math.

Ticketing is one of the most important elements of any sport. Each sport has a different number of viewers. Hence, the authorities use mathematical concepts to distribute tickets for the stadium or the destination of the match. It is crucial to understand the number of participants and number of visitors to distribute tickets in a certain proportion only. After all, no match would ever want overcrowded grounds or a lack of tickets.

With every sport, logistics and math are used in combination to analyze the seating arrangement. In a stadium, players are allocated a different area while visitors are also classified according to their ticket rates. In such situations, math calculations are made to check which area is the best suitable in terms of angle and viewing points. Similarly, rows and columns also have to be assigned in a way that leads to proper distribution for visitors.

Any sport is conducted after a thorough analysis of numbers. Here, the schedule of matches also depends on different components. Cricket matches are generally played during vacation time while a prominent world cup is always scheduled during the weekend. The data analysis and probability of weather are also used to decide if a particular location is suitable for the match. Similarly, the arrangement for players is also done as per their schedule of arrival and departure after the match. It requires the concepts of data analysis, addition, subtraction, probability, and permutation.

It is indeed fun and helpful to convey mathematical ideas to children using various tutoring techniques that are related to sports. Using sports to teach math is an easy approach to increase motivation since it adds a fun and relatable factor. Similarly, parents and teachers can use these realistic examples to create an interest towards math. As math revolves in various ways, online games, books, and practice sheets can be used to teach the concept in an efficient manner. Parents and teachers can use various mediums to offer a diversified learning platform to children.