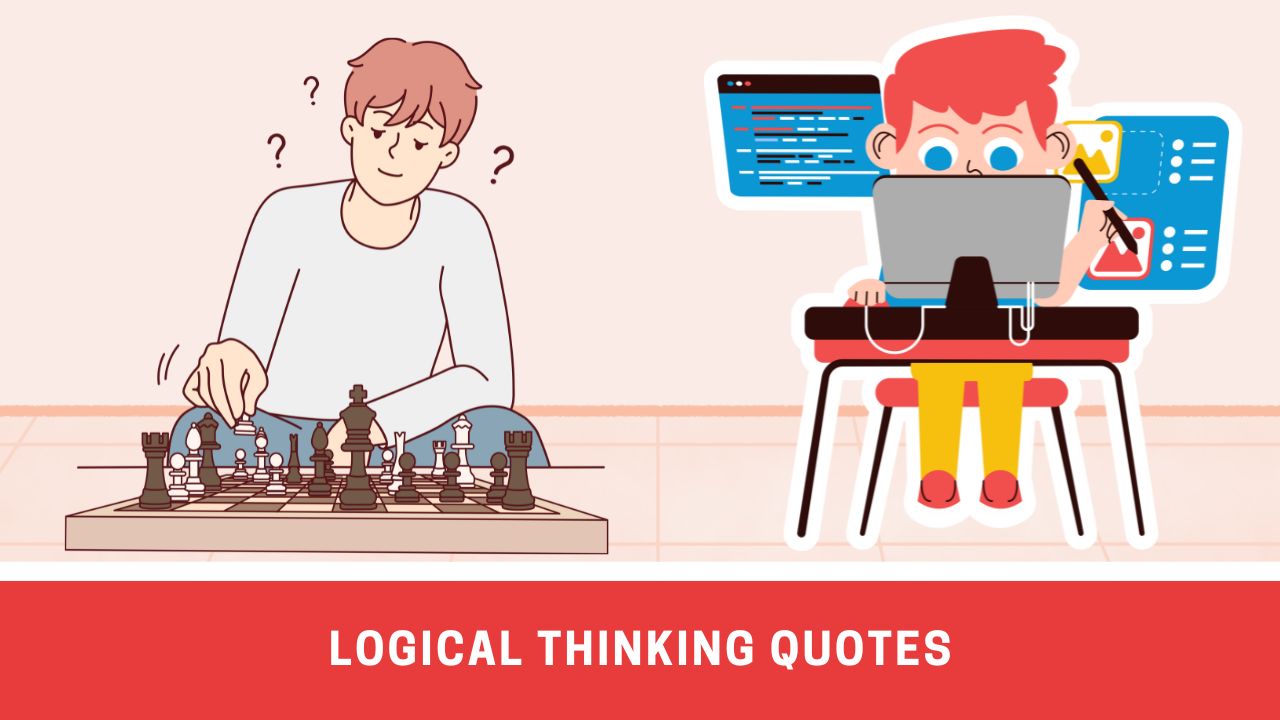 Logical thinking is an essential skill for students. Once equipped with this invaluable skill, students are empowered with a useful tool to stay with them into the dawn of adulthood. These skills include a variety of other skills that enable us to critically evaluate and analyze a certain problem or information to come up with suitable solutions. Hence, teachers usually need to pay more attention to grooming these skills in students.

Furthermore, a connection is also often drawn between individuals having dyscalculia and logical thinking. However, there are a lot of ways to ignite zeal and motivation amongst kids, such as quotes! Quotes, being short, and delivering the message right on the spot, can be a great educational and motivational tool for budding learners.

Therefore, this post is specially dedicated to logical thinking quotes from the greatest philosophers and thinkers who positively motivate all the students. Being motivated by these quotes, you can improve your productivity, creativity, and problem-solving skills.

Quotes, are the one motivational tool that can be used in a plethora of ways. These often ignite the children with zeal and enthusiasm and fill them with immense positivity. Hence, here are a few logical thinking quotes for learners who are striving to think more logically.

1. “Logic will get you from A to B. Imagination will take you everywhere.” – Albert Einstein.

2. “Logic is in the eye of the logician.” – Gloria Steinem

“3. A mind all logic is like a knife all blade. It makes the hand bleed that uses it.” – Rabindranath Tagore

4. “Logic is one thing and common sense another.” – Elbert Hubbard

5. “Logic is like the sword – those who appeal to it, shall perish by it.” – Samuel Butler

6. “Logic is the beginning of wisdom, not the end.” – Leonard Nimoy

8. “When intuition and logic agree, you are always right.” – Blaise Pascal

9. “Against logic there is no armor like ignorance.” – Laurence J. Peter

10. “Logic and mathematics are nothing but specialised linguistic structures.” – Jean Piaget

11. “Nature is the source of all true knowledge. She has her own logic, her own laws, she has no effect without cause nor invention without necessity.” – Leonardo Di Vinci

14. “Logic helps us to strip off the outward disguise of things, and to behold and judge of them in their own nature.” – Isaac Watts

15. “Logic is not a body of doctrine, but a mirror-image of the world. Logic is transcendental.” – Ludwig Wittgenstein

“17. All opinions are not equal. Some are a very great deal more robust, sophisticated and well supported in logic and argument than others.” – Douglas Adams

18. “What I like about the jokes, to me it’s a lot of logic, no matter how crazy they are. It has to make absolute sense, or it won’t be funny.” – Steven Wright

19. “Deep in the human unconscious is a pervasive need for a logical universe that makes sense, But the real universe is always one step beyond logic.” – Frank Herbert

20. “Crime is common. Logic is rare. Therefore it is upon the logic rather than upon the crime that you should dwell.” – Sir Arthur Conan Doyle

21. “Judge with logic and reason, but comment not.” – Christopher Paolini

22. “Pure logic can lead you to conclusions that are ethically wrong, whereas if you are moral and righteous, that will ensure that you don’t act shamefully.” – Christopher Paolini

23. “The answer is logic. Or, to put it another way, the ability to reason analytically. Applied properly, it can overcome any lack of wisdom, which one only gains through age and experience.” – Christopher Paolini

25. “There are crimes of passion and crimes of logic. The boundary between them is not clearly defined.” – Albert Camus

26. “The logic of words should yield to the logic of realities.” – Louis D. Brandeis

27. “Logic is a system whereby one may go wrong with confidence.” – Charles Kettering

28. “Logic is the hygiene the mathematician practices to keep his ideas healthy and strong.” – Hermann Weyl

29. “Logical thinking keeps you from wasting time worrying or hoping. It prevents disappointment. Imagination, on the other hand, only gets you hyped up over things that will never realistically happen.” – Jodi Picoult

30. “Consequently he who wishes to attain to human perfection, must therefore first study Logic, next the various branches of Mathematics in their proper order, then Physics, and lastly Metaphysics.” – Maimonides

31. “Intuition is a suspension of logic due to impatience.” – Rita Mae Brown

32. “Practice has a logic which is not that of the logician.” – Pierre Bourdieu

33. “I think being sensitive gives you powers. You get the logic and the flexibility of emotions.” – Denzel Curry

34. “Pure logic is the ruin of the spirit.” – Antoine de Saint-Exupery

35. “We especially need imagination in science. It is not all mathematics, nor all logic, but it is somewhat beauty and poetry.” – Maria Mitchell

38. “Logic is the technique by which we add conviction to truth.” – Jean de la Bruyere

39. “Logic is one thing, the human animal another. You can quite easily propose a logical solution to something and at the same time hope in your heart of hearts it won’t work out.” – Luigi Pirandello

40 “Humor is something that thrives between man’s aspirations and his limitations. There is more logic in humor than in anything else. Because, you see, humor is truth.” – Victor Borge

41. “I always approach logic without emotion. The math always equals the math. Regardless of whether I discovered the math before anyone else, or I just decided to accept it, I know what logically makes sense, and I’m going to speak on it every time.” – Damon Dash

43. “Because of their very nature, science and logical thinking can never decide what is possible or impossible. Their only function is to explain what has been ascertained by experience and observation.” – Rudolf Steiner

45. “Trying to understand the way nature works involves a most terrible test of human reasoning ability. It involves subtle trickery, beautiful tightropes of logic on which one has to walk in order not to make a mistake in predicting what will happen.” – Richard P. Feynman

46. “Logic: The art of thinking and reasoning in strict accordance with the limitations and incapacities of the human misunderstanding.” – Ambrose Bierce

47. “I am convinced that the act of thinking logically cannot possibly be natural to the human mind. If it were, then mathematics would be everybody’s easiest course at school and our species would not have taken several millennia to figure out the scientific method.” – Neil deGrasse Tyson

48. “Freedom in art, freedom in society, this is the double goal towards which all consistent and logical minds must strive.” – Victor Hugo

49. “Human beings are not reasonable creatures. Instead of being ruled by logic, we are ruled by emotions. The world would be a happier place if the opposite were true.” – Nichola Yoon

50. “Childhood’s logic never asks to be proved (all conclusions are absolute): – Maya Angelou

Can quotes be instrumental in boosting logical thinking?

Learning a new thing is always challenging. Sometimes, you know you have to work on a specific aspect, yet it unconsciously skips your mind. Or you need to stay consistent with your goal. To combat such things, you need a constant reminder of what makes your goal valuable to you. A simple short quote on the importance of the goal could help you with that. It can become a constant motivation that keeps you moving toward your goal. For instance, teachers who want to experiment with experiential learning can begin with quotes about the same for kids to understand the importance of the module and be motivated to learn through experiences.

Moreover, these quotes are impactful because you resonate with those words. The words coming from great leaders and thinkers are always heavy with meaning, and that’s why they hold so much power to drive positive change in people’s mindsets.

Long story short, quotes can be an instrumental tool that can help you maintain your thought on track. They are short but meaningful and hold so much power because they can let you make a huge mindset shift. They also help us change our mood, give us hope, and make us see reason when we are at our lowest. Logical thinking is the need of the hour; it can pave your way to unlimited success and equip you with the confidence that you are lacking.

So go and ace the art of logical thinking with the company of these meaningful quotes.