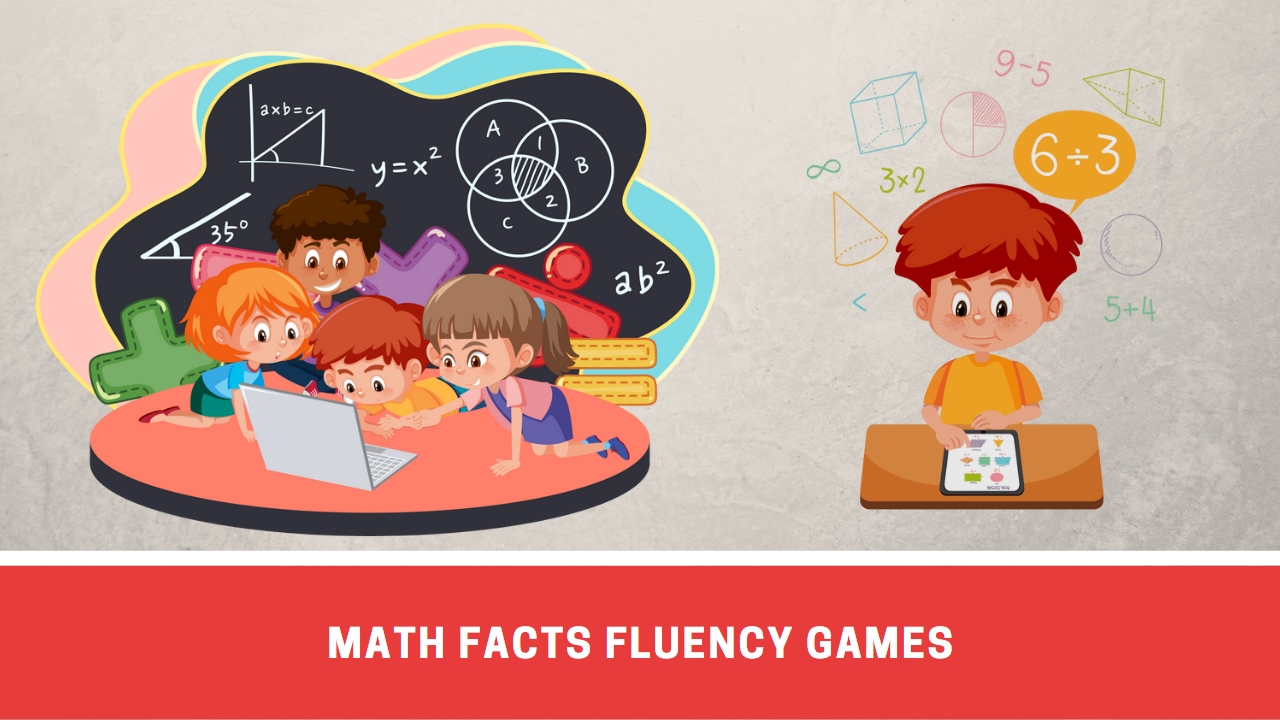 “Three plus five equal to…”

Most of us have self-answered the above with a blink of a second, without even worrying to recheck it. We know that the answer would be correct as we are confident in our math-recalling skills. Our repeated experience with such problems on our day to day basis made us fluent in solving them without using any assistance. This is called Math Fluency. It’s an ability to do maths and solve numerical-related tasks accurately and quickly. We become more and more fluent in maths as our interaction with it grows with age.

However, In some students with math difficulties, the impetus of math facts fluency may not achieve that level as expected from an individual of that age. Some early interventions are required in such cases. A new learning process should be adapted. There are numerous ways of turning maths into a fun learning subject. One such is to present it to the kids in a form that they like the most.

Yes, you guessed it right! GAMES. May it be indoor, outdoor, board, or mobile games. Kids learn while playing. They develop analytical, strategic, and spatial skills while doing it. Introducing a few numeral facts and tasks in these activities has proven to be quite helpful in building strong mental math skills in the long run.

We curated a list of the top 10 free mobile games for building math facts fluency. Our focus in this post is on the games that help in building math facts and numerical automaticity. We tried reaching every corner for it and thus, came up with apps that people find useful in improving such skills.

Developed by the Scholastic educational team, Sushi Monster is a fun game to test and practice your math fact fluency. Users need to solve a series of addition and multiplication problems by feeding the monster numbered plates of sushi. Players are given a series of products and sums. They need to build correct equations to feed the monster within the timeframe. The quicker they give the correct solution, the higher the score will be.

The game tests more than just mental math abilities, players need to plan ahead, as the order in which they choose sushi plates will determine if they fully complete the level. Sushi Monster is recommended for children aged 6 and older. It is currently sitting at a 4.0-star rating at the app store. At the moment, the Sushi monster has 7 addition levels, 5 multiplication levels, 4 rounds/level, and 14 target numbers/round.

Monster Math is an educational adventure platform game that improves over 70 math skills including addition, subtraction, multiplication, division, and fractions. The gameplay involves guiding the player by giving answers to math equations to kill monsters and obstacles. The best part of the game is the customizability. You can configure the level of the game according to the pace. It covers the age group of students from KG to Grade 5th. As per the description of the game:

Developed by Makkajai: Math Games for 1st, 2nd, 3rd, and 4th grade, Monster math has been installed in more than 100,000 devices worldwide. It’s currently sitting at 4.0-star ratings on the play store.

Numbots is a highly engaging platform to help your child achieve the ‘triple win’ of understanding, recalling, and fluency in mental maths problems, from subitizing to simple addition and subtraction. The game begins at the level of kindergarten but you have to climb your way through the levels to reach the required maths fluency. Thus, the pace at which you ace in your hands! The updated version even comes with new sound effects!

Designed for kids in Kindergarten to Grade 6, Zapzapmath School makes math learning really fun. Kids can play sundry concepts of math with new adventures at every stage. It features over 180 games that cover over 180 math subtopics. The games adapt to the learning pace of the individuals, increasing their replay value.

Each math topic is divided into 4 Skill Areas: Training, Accuracy, Speed, and Mission. Hence, it makes sure that the math fact fluency is well-tested while playing the game. Parents can track the progress of kids’ learning via. web dashboard. Reports are generated on an individual basis for players who are under parent accounts and collectively for student players under teacher accounts. The game has been installed on more than 100,000 devices worldwide.

Toon math is the product mix of popular endless runner genre games and math as an educational component. Players need to solve math problems while running and dodging obstacles to save their friends. The game features impressive mechanics, and the transaction from playing to solving math operations is smoothly done. The game tests the automaticity of your math facts fluency skills. The timer on the game ensures that you put your mental math skills to work.

Amazing graphics and intense gameplay will let your kid hooked to it for hours. Toon math is a game for almost any age group. Toon math lets you play the game at your own pace. Toon math is available on the play store and amazon app store at the moment. More than 500,000 users play this game worldwide. It is sitting at 4.5-star ratings at the android play store.

Prodigy game is the perfect example of ‘learning while playing’. It lets you practice concepts of mathematics in an interactive way. As per the description, Prodigy delivers a unique learning experience through an interactive math game where success depends on correctly answering skill-building math questions. Players can earn rewards, go on quests and play with friends — all while learning new skills.

The app mainly targets kids ages 6-12. Its user base comprises over a million teachers and 50 million students around the world. Parents can monitor their child’s progress through the levels and understanding of the concepts. Teachers should allow students a 10-minute play in class as a reward for completing a task. This will motivate students and give them a sense of achievement.

TapToLearn games is an arcade-style fun and challenging game, where you save the city from the zombies. You, as the math genius, have the superpowers to turn zombies back into a normal human being. However, you need to solve math operations like addition, product, subtraction, etc. first to use these powers. The game becomes challenging as stronger and more powerful zombies approach. You are required to solve the equations quickly before it attacks you and eats your entire health bar.

Math vs Zombies have 4 worlds with 7 levels each to sharpen your addition, subtraction, multiplication, and division skills. Parents and Teachers can track the progress of the child in the report card area of the app. Over 150,000 users play this game worldwide.

Threes is an addicting puzzle game that tests an individual’s mathematical strategic ability. Users have to make 3s and multiples by swiping blocks of numbers placed on the board. Numbers are added when pushed against the boundary of the board. Players have to make numbers under certain rules and conditions. As the game progresses, the steps become limited due to movement constraints. The success depends upon the player’s revision in the game. Threes is a fairly popular game with close to a million people playing it at the moment.

Math 24 lets you practice mental math skills with numbers and operators on screen with a single goal of making it to 24. The game has stage mode and speed mode. The latter tests the automaticity level of your math facts fluency. Graphics are although minimalistic but adorn the gameplay. The best part is that it tests an individual’s strategic abilities in maths. Kids can use the different operators as per their strategy to make it to the 24 number.

The staging mode has 15 levels and 300 well-designed levels with varying difficulty levels. More than 100,000 users play this game worldwide. It’s currently sitting a 4.3-star rating at the play store.

This exciting game comes with a variety of innovative math challenges. These include the ‘Memory match’, where you get to flip memory cards and match the answers with the equations. Also, you can activate the Challenge mode, where you have to finish the puzzles within a time period, so to help your child speed up on his maths. If the children decide to get competitive, you may even activate the dual mode to get a split-screen interface for two players. Math duels were never so enchanting!

Maths fluency is not just an academic pursuit, it is a life skill and everyday need. Not getting simple mathematical addition and subtraction etc can turn out to be an embarrassing experience, not just for children, but for adults as well. That is why these games serve a dual purpose of education and entertainment. May the maths, rather than being a source of discomfort, empower your child and fill him with enthusiasm and calculation energy.