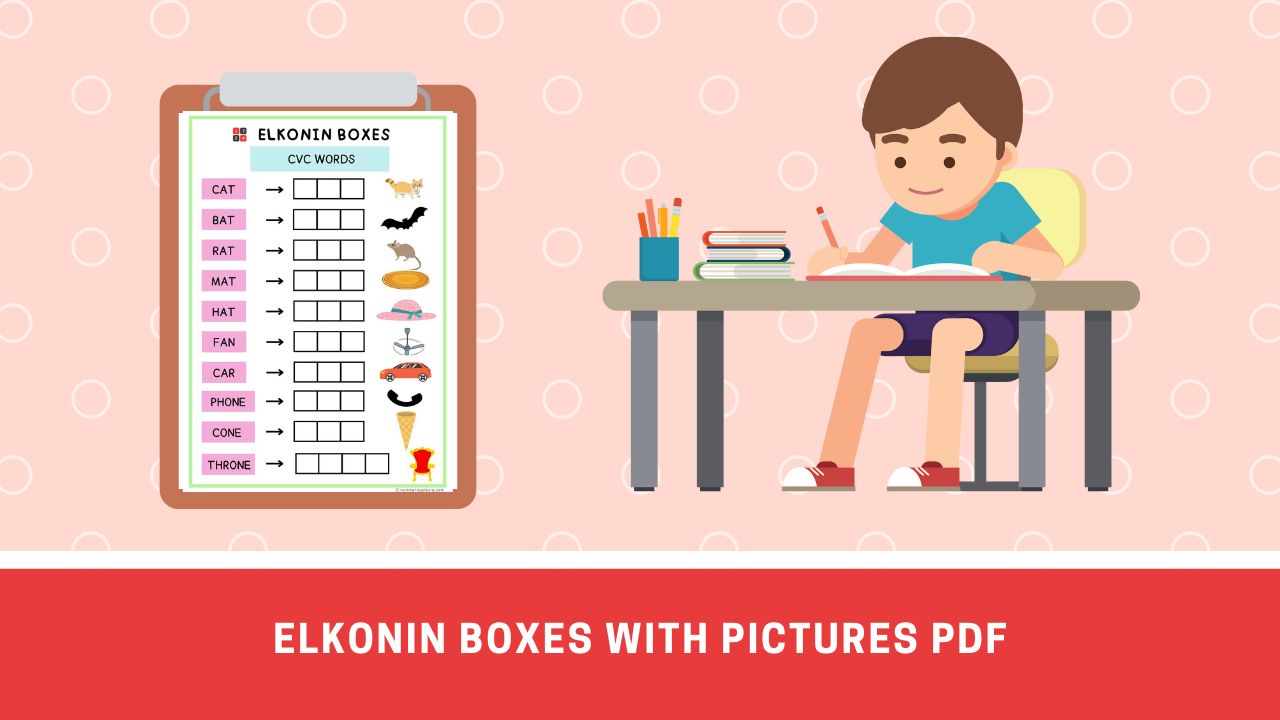 Learning to spell and absorb the complexities of a few words can be a daunting task for little learners. However, some tools like the Elkonin Boxes can help massively with phonological awareness.

Elkonin boxes, also known as sound boxes or phoneme frames can be used to help young children learn how to segment and blend words. By using Elkonin boxes, children can see the individual sounds that make up a word and manipulate the sounds to create new words.

Educators and parents can check out this PDF attached below to dive into a whirlpool of phonics learning that’s a visual treat for all. In this post, we will be discussing everything about Elkonin boxes and know how to make the best use of them for an upbeat learning curve. Learn more below.

Elkonin boxes: How do these help the little learners?

Elkonin boxes were invented by Lev Elkonin, a Soviet psychologist, in the mid-1900s. The idea behind this invention was to help children develop phonemic awareness, which is the ability to hear and identify individual sounds in spoken words. This skill is essential for learning to read and spell words correctly. Elkonin boxes have been found to be an effective teaching tool, and they are still used in classrooms today.

They can be used in a variety of ways to help children with their reading and spelling. For example, they can be used to segment words into individual sounds or to help children identify the beginning, middle, and end of words. Additionally, Elkonin boxes can also be used to improve a child’s fluency and comprehension. There are many different ways to use Elkonin boxes. However, one of the most effective ways to use them is to fill the boxes with pictures of objects that begin with the sound that the child is working on. For example, if a child is working on the sound /b/, the boxes could be filled with pictures of a ball, a book, and a bat.

Filling the boxes with pictures is an effective way to help children because it allows them to see the connection between the sound and the object. It also helps make the activity more fun and engaging for children.

Here’s how to use Elkonin boxes with pictures:

1. Choose a picture that has several clear syllables. Print or photocopy the picture so that each child has their own copy.

2. Model how to segment the word into individual sounds by saying each sound slowly and then placing a marker in an Elkonin box. For example, for the word “cat,” you would say “/c/ /a/ /t/” and then place markers in three different boxes.

3. Invite the children to try segmenting the word themselves. As they do so, encourage them to say each sound slowly and clearly.

4. Once the children have segmented the word, challenge them to blend the sounds back together to form the word. Again, model this for them first by saying each sound slowly and then saying the whole word together (/c/ /a/ /t/ = cat).

READ :   How does math help in building phonics skills?

5. Finally, invite the children to try blending the sounds themselves. As they do so, encourage them to say each sound slowly and then say the whole word together (/c/ /a/ /t/ = cat).

Using manipulatives around the house as Elkonin boxes

Although, the pictures and the words in the PDF will help make the activity more fun and engaging for children while also helping them to see the connection between the sound and the object. With the teacher’s help, they will be able to quickly learn how to segment and blend words. However, parents can also use some objects around the house as manipulatives as Elkonin Boxes that can help with students’ phonological awareness and serve as the perfect creative Elkonin box.

Some manipulatives that can be easily found in the house are:

Parents can use egg trays as Elkonin boxes and ask the students to put buttons or candies in the tray as per the sound of the word. For example, if the word is CAT – the kid can put in the candies as per the sound in each of the egg compartments of the crate to differentiate the sound and understand the phonological root of the word.

Similarly, an ice tray can also be used as an Elkonin box manipulative where the kid can put some smaller ice cubes back into the ice tray as per the word. For example, if the word is APPLE, the student can put in 4 ice cubes back, demoting – A, PP, L, and E.

Used sweet boxes can act as a great manipulative for Elkonin boxes at home, as these can be used to explain to the kids as sounds of the words. For example, if the word is GLASS, the student can put buttons or sweets or candies in the boxes as per the sound of the word.

Elkonin boxes can be used in a variety of ways to help children with their reading and spelling. For example, they can be used to segment words into individual sounds or to help children identify the beginning, middle, and end of words. Additionally, Elkonin boxes can also be used to improve a child’s fluency and comprehension. When used effectively, Elkonin boxes with pictures and PDFs can be a valuable tool for helping children with their reading and spelling skills. If you are looking for a way to make the activity more fun and engaging for children, filling the boxes with pictures is an effective approach.