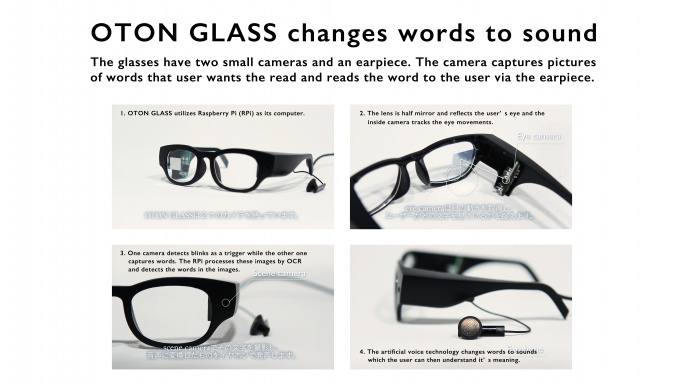 Text-to-voice is an excellent outcome of character recognition technology that every dyslexic or visually impaired can benefit from. Popular Apps like Smartynote Pro and Evernote widely use this functionality to serve their users who have a learning disorder. Taking a step further, A Japanese company implemented the technology in a pair of smart glasses. Keisuke Shimakage from the Institute of Advanced Media Arts and Sciences, Japan developed OTON Glass that reads text to the wearers. It’s an effective tool for people with dyslexia or poor vision, or for travelers abroad.

OTON Glasses have two small cameras and an earpiece. The camera captures pictures of words that the user wants to read and reads out the words for the user via the earpiece. All you have to do is to turn on the OTON GLASS and turn to the character you want to read.

Keisuke’s inspiration for OTON Glasses came after his father diagnosed with dyslexia. “In 2012, my father had a brain tumor and developed dyslexia after his operation – a catalyst for OTON GLASS. Fortunately, he recovered fully after rehabilitation. However, many people have congenital dyslexia regardless of their symptoms.”

“It’s difficult for us to imagine a world where things you were able to read before become suddenly incomprehensible. We forget about the days when we were unable to read, before growing older and becoming literate,” Shimakage, CEO of Tokyo-based startup Oton Glass, said during a recent interview with The Japan Times.

“It was after my father was hit by the stroke that I first realized our world is actually full of letters, and that being unable to read them may cause a significant disadvantage in our daily lives,” he said.

Identifying the need led him to gather a team of engineers and designers. He began interviewing and collecting feedback from his father and 5 other people with dyslexia. After several trials and errors, Keisuke finally developed the concept of OTON Glass.

OTON Glassworks by uploading photos to the Raspberry Pi cloud system. With the help of OCR (Optical Character Recognition) engine in the cloud, the text is extracted. The extracted characters are then sent to the voice synthesis engine for conversion into voice data. The audio data is then downloaded and played through the earpiece.

The product has already gone through various upgrades based on feedback collected from dyslexic users. Recent updates have shortened the duration gap between capturing text and replaying audio to 3 sec which was 15 sec in the initial prototypes. In 2016, the device was runner-up for the James Dyson Award, and it has also garnered attention at various other awards shows and in the media.