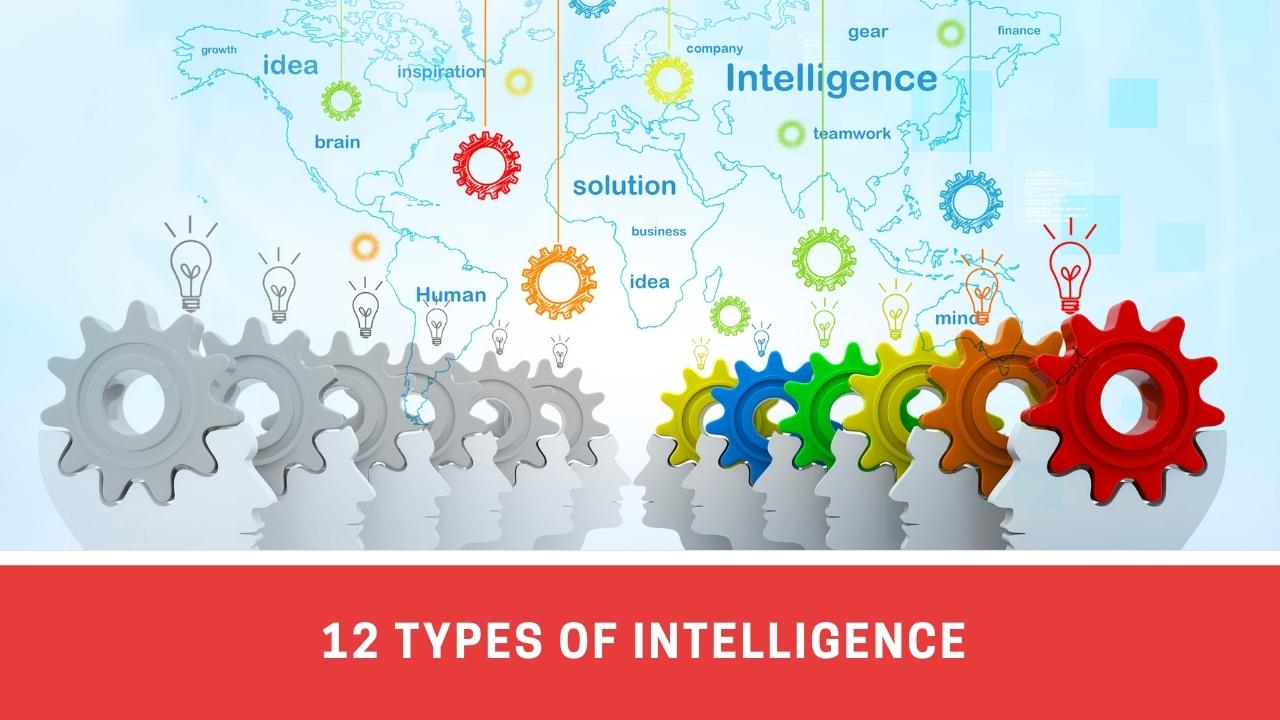 Great people have defined intelligence in their own ways. While Einstein stated, “the true sign of intelligence is not knowledge but imagination”. Intelligence is characterized by having certain traits of perceiving and learning things differently which makes all of us unique in having unique intelligence.

Few of us may be good at maths and logical reasoning, and few can learn language and vocabulary faster at a very young age. These attributes may sometimes get reflected in academic performance too.

That being the case, many are often confused to identify which intelligence they really possess. Accordingly, to learn and excel in something, you need to comprehend the multiple types of intelligence and thereby work upon them to succeed.

Theory of multiple intelligence- The advent of the intellects’ theorem

Howard Gardner, a psychologist in 1983, introduced the existence of multiple types of intelligence in his book called “Frames of Mind” With his theory, he denied the conventional idea of intelligence by proposing that there can be people differently skilled, where one person can be good at numbers, and another can be good at communication. The book was well-liked as the characteristics of each category were well described with attributes and examples.

The ability to look at the problems logically and perform maths skills to solve them is logical-mathematical intelligence. It also involves examining and solving science-related problems. The people with this intelligence are good at calculations, quantifying, and performing complex logical and maths operations.

These Individuals use abstract and symbolic thinking abilities, reasoning, patterns. They can develop equations and do research to solve abstract problems and are fit for the field of Mathematics and physics. Accordingly, they have the following skills:

Since they prefer to work with numbers, careers as accountants and analysts can be befitting for them.

This intelligence type is all about abilities to speak and write the language. It manifests that it’s an ability to learn and use a language effectively. Many popular writers and great speakers possess this linguistic intelligence. Individuals with linguistic capabilities are good at grammar, vocabulary, speaking and can express themselves in a language.

They can analyse complex words and express their meaning and use that easily. These Individuals can interpret the information precisely and are good at oral and written language. Consequently here are the key attributes that these individuals have:

Linguistic intelligence can be developed with some activities. Such aspirants can look into career options like journalist, lawyer, and orator.

The art of discerning various patterns and dimensions in space obligates spatial intelligence. The best instance is a pilot discerning the surrounding being in flight. Not only pilots but also professionals like architects also need such intellects. In Layman’s terms, Spatial intelligence is the ability to think in a three-dimensional way.

Individuals who have it have extraordinary capabilities to recognize and manipulate large-scale spatial images straightforwardly. They have excellent imagination power. Further, they can be identified with the following traits:

In layman’s terms, spatial perception, orientation, and mental rotation form the signs of these individuals. Such aspirants can choose careers like graphic designer, architect, or sculpture.

Here, the individual often employs their arms and sense of touch to grasp new notions. Individuals having it can become athletes or dancers, or carpenters. They can solve problems or create products.

Individuals with kinesthetic intelligence are capable of solving problems with deep mind-body coordination. They have great control over automatic movements, so they can competently use their body to excel in their fields.

Here are a few noteworthy skills that such individuals possess:

Such individuals can aspire to careers like technicians, and wielders, where kinesthetics play a crucial role.

Musical intelligence implies the ability to interpret and compose musical notes, instruments, and patterns. Individuals with it have the quality to recognize, compose and create melodic music. They tend to learn music, notes, instrument playing, etc., easily and efficiently.

They can differentiate various music styles, and also compose various versions of music. They have a special sensitive feel for the music, and they will know easily and detect the wrong notes playing on an instrument. Accordingly, here are the distinct skills that characterize these individuals:

Mills[1] in his research found that musical intelligence includes traits like MI, music integration, musical growth, and assessment. Further, it is also outlined that the political climate of the school is also cited as highly influential in the extent of such intelligence in students.

For their better management and communication abilities, these can turn towards careers like managers, administrators, sociologists, and counselors.

Intrapersonal Intelligence is the basic ability to imply the ability to understand oneself in a better way. They are well aware of their wishes and desires, feelings and moods, and they can utilise this information to manage their lives brilliantly.

They possess a kind of intelligent self-recognition, and they understand how their cognitive skills work. Intrapersonal intelligence makes them efficient in making correct decisions and solving issues. With these attributes, aspirants can look forward to careers like Psychologists, therapists, and Theologians.

Joengbin Choi[2] in his research looked at the effect of the Development program for intrapersonal intelligence, This course had digital attributes, flipped learning, and timelessness.  The result showed a positive effect on students in improving these intellects.

Emotional intelligence can be seen as a conjunction of intrapersonal and interpersonal Intelligence. It refers to the ability to recognize and manage one’s own emotions and others. It consists of five abilities – emotional self-awareness, self-control, self-motivation, empathy, and social skills.

These individuals know their moods, feelings, and emotions very well and know how to manage them assertively. These Individuals are emotional, but they don’t let their emotions overwhelm them. They know psychological resources to manage their emotions properly. Consequently, here are positive areas where they get distinct:

With these dominant attributes, these individuals can choose careers like writers, filmmakers, and actors.

Naturalistic intelligence is the skill set to perceive the connection between species and people. Individuals having this intelligence can recognize any difference or similarity between them. They can easily identify and classify certain group members by observing them. Nonetheless, individuals can recognize the types of species in nature and are sensitive to their environment and surroundings. They have a natural curiosity to examine and search their environment to find something new and connect with nature.

With these attributes, naturalistic intelligence may assist an individual to aspire for careers like animal trainer, park ranger, landscaper, or marine biologist. Mark A. Hydes[3] studied the importance of naturalistic education in students. The time spent outdoors alone and with other people with naturalistic intelligence helped the students to learn subjects like biology better, and also about careers that they can pursue.

Gardner defined existential intelligence as the capacity to locate oneself concerning the cosmos and the human condition and their existential features, such as the meaning of birth(the beginning of life) and death (the end of life), and deep encounters like love for another Individual.

An Individual with this intelligence can reflect on his existence and meaning of life and death. They mostly live spiritual and philosophical life and question each and everything that happens around them. They do have the ability to observe the environment and themselves. Here are some other distinct skills they possess:

READ :   Self-Advocacy In Students With Learning Disabilities: An Overview

These attributes may turn such individuals into careers like meditation instructors, Pastor, or public speakers.

This intelligence refers to combining intelligence with imagination to create a product or conceptualize an idea creatively. Individuals with creative intelligence usually can think uniquely and come up with new and innovative ideas. Professions that require creative thinking skills can be the take-ins for individuals possessing such intelligence.

They use this intelligence by imagining different possibilities in their lives or careers. They have open and flexible thinking abilities to see things from an unusual perspective to find a unique solution. Apart from these, some other skills may distinguish these people:

This intelligence has emerged as a new type in the modern digital era. It refers to the capacity of working in a collaborative setting or with teams to achieve a common aim. It also implies an order deliberation, which makes team members share their knowledge and decide.

This intelligence helps overcome the challenges (if any) in a complex environment. It is a special kind of intelligence as it makes individuals work with others. These Individuals are comfortable working with teams and show their best efforts in collaborative settings. Here are some skills that make them divergent:

Individuals with collaborative intelligence can look for profiles like customer service representatives and bank sales managers, where relationships with clients are eminent.

Questionnaire: Find what intelligence you have!

Comprehending the twelve types of intelligence, you may be enticed to know what intelligence you possess. While you may need a professional to determine the same accurately, you can check a few attributes of your personality to come to general perceptions. Here are a few questions that you can ask yourself:

The multiple intelligence theory is a daring idea that presents a different perspective other than the conventional concept of intelligence. This theory is not limited to the skill set recognized as the intelligence related to just academic excellence.

When individuals understand their skills and talents, they can figure out the possibilities to achieve their personal and professional goals. An Individual is destined to succeed if he works well with his intelligence and skill set.