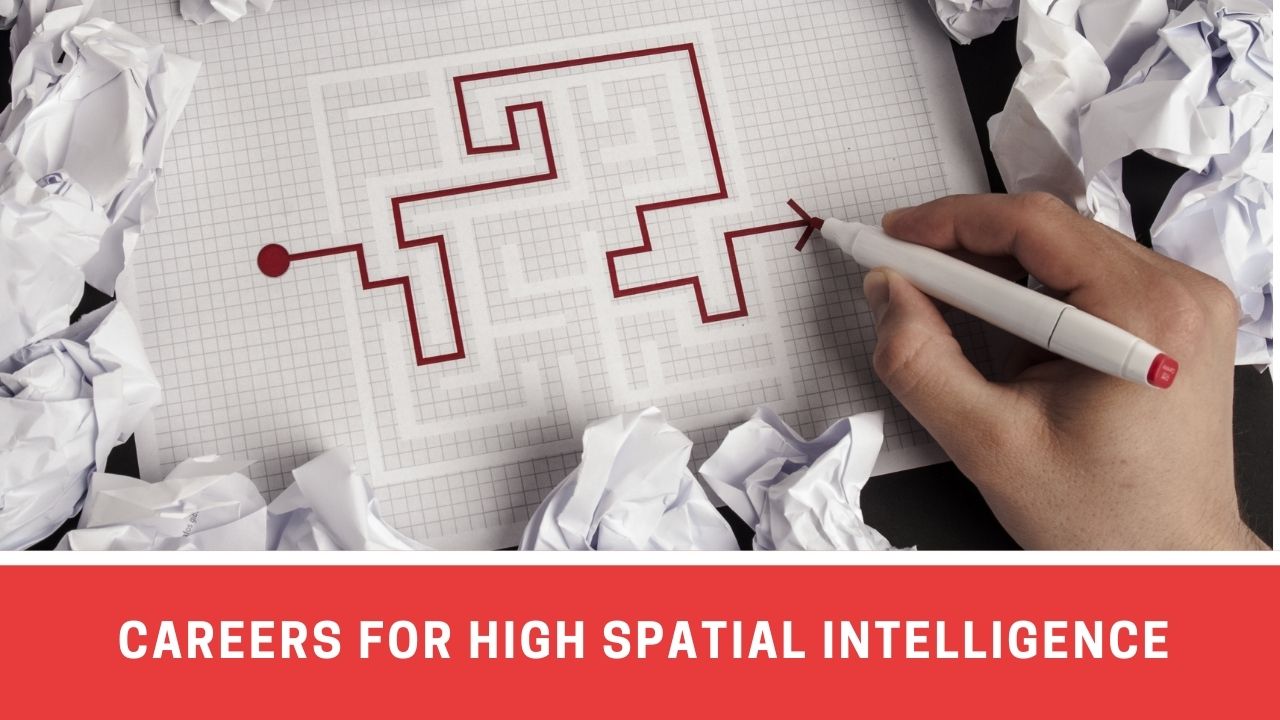 The definition of intelligence, over time, has been broadened from mere academic success pinning it down to a single, holistic factor. Today, various researches acknowledge intelligence to be composed of several primary mental abilities. In 1938, Thurstone defined the ‘space’ factor of intelligence that represented the ability to operate mentally on spatial and visual images.

The two principal factors involved in spatial intelligence are orientation and representation. Both these factors nurtured, and lead to spatial competence. Like all forms of intelligence, spatial intelligence can also be nurtured more in specific areas and the skill set it offers can be of particular requirement and even a necessity in certain professions.

Keeping this in mind, we present you a list of top career options for individuals with high spatial intelligence, which is in fact a ‘special’ intelligence in many ways:

It is said that while authors write with their pens to express their emotions, photographers capture theirs with the camera lens. Photography is an art that requires an intimate awareness of the spaces around you and the ability to capture these spaces in the right orientations.

Photography, in the present times, is not merely an artistic pursuit, but a serious profession. Whether, it is war photography, wildlife pictures, or candid shots of everyday mundane, a well-taken photograph can convey a thousand words and wake up a million souls.

Photography, just like social media and its power, is on a rise and is surely becoming a sought-after profession.

Again as the power of the internet is becoming all-encompassing and all the limelight is focused on the digital space, graphic designing is slowly becoming a sought-after skill set. It involves anything from designing a logo to designing an entire website.

You have to design the various features on the website so that the spatial orientation of each feature comes together to provide a unified picture. It requires you to create images that strike a chord with the target audience. For the said purpose you need to be adept at the art of handling videos, animation, multimedia, packing, illustrations, and much more. All these tasks require their fair share of spatial intelligence and the ability to make creative use of spaces.

Modern problems of urbanization and overcrowding require modern innovations in the field of architecture in order to not compromise functionality for spatial orientation and representation. Also, interior aesthetics have to follow suit to match up to the change in trends and architectural designs.

Both the field of architecture and interior designing thus require a high level of special competence, more so with new technology and innovations ushering in every day in both these fields.

Spatial orientation is not merely required for understanding huge spaces, but also minuscule ones.

Painters and sculptors need to form mental images of the art that they want to build with their hands and often have to take precise decisions on the design and distance between the eyes and nose of the subject and the orientation of the arms.

In the case of painters, they are expected to magically transform a 3D subject into a 2D image in proportionate dimensions. Sculptors are also expected to refine the aesthetics while staying true to the reality of the subjects. Both these careers demand good spatial intelligence along with a creative flair in individuals.

Both Biochemists and Genetic scientists work at the molecular levels. Recognizing the huge amount of data in 3D and representing it in 2D, as well as deciphering a pattern in them requires spatial competence arising out of sound spatial intelligence.

Both fields require considerable work in the orientation and representation at the molecular level and thus are a good career choice for individuals who are comfortable with the idea of spaces.

READ :   Accommodations For GRE For Aspirants With Dyscalculia And Other Learning Disabilities

Spatial intelligence is not a mere prerogative of artistic pursuits but has a high requirement even in the field of science. Physicists, who work on theories and design experiments to support these theories, often are expected to have a high level of spatial intelligence in order to be able to design such experiments.

In fact, spatial intelligence also has been proven to have a significant impact on mathematical skills, which physicists are expected to excel at. For that matter, even mechanical and civil engineers are expected to have a high level of spatial intelligence to be able to form specific designs in their minds and then reproduce them both on paper and in their final real form.

Industrial designs include designing things from toys and home appliances to cars. Thus, the field of industrial designing requires good 3D and 2D sense and interchangeability between them.

Thus, they are very much on the list of professions of the ‘new world’ and are both part of the future, as well as the future itself.

From the ‘new world’ to the old world charm of maps, individuals with high spatial intelligence can put their talent to good use by designing and understanding maps in the field of cartography as well.

Cartography has witnessed a new leash of life with the explosion of interactive maps and the demand for accurate maps for web-based platforms. Thus, the globe-trotting cartographer has transformed into a code-writing technocrat. However, the need for high spatial intelligence still remains the core demand of the job.

READ :   IEP and its goal for writing skills

Such individuals can also be good geographers and surveyors, as well as work wonders in professions that require competent navigation skills.

Individuals with high spatial intelligence do well in careers as therapists and clinical psychologists as well. This is because they are known to be better at catching non-verbal cues and understanding the body language of the patient.

Often, patients requiring therapy are unable to achieve effective verbal communication. In these scenarios, insights about the patient’s mental condition have to be gathered through other approaches like keen observation and a sharp eye.

Individuals with high spatial intelligence have been seen to possess a keen sense of observation that helps them build a good career in the field of care practitioners.

According to Grow (2011), “spatial intelligence is a skill through which engineer designs, hikers conceptualize their path, painters feel the tension and balance of their paintings and chess masters plan their next move. It also defines the abstract intelligence of a battle commander and a theoretical physicist.” This continuous interactive relationship between the subject and the space has nurtured spatial intelligence into spatial competence that has given many gifts to humanity in both the cultural and scientific arena.

Thus, individuals blessed with high spatial intelligence can further enrich the world around them by choosing careers that help them make good use of their skill set as well as further enhance it.