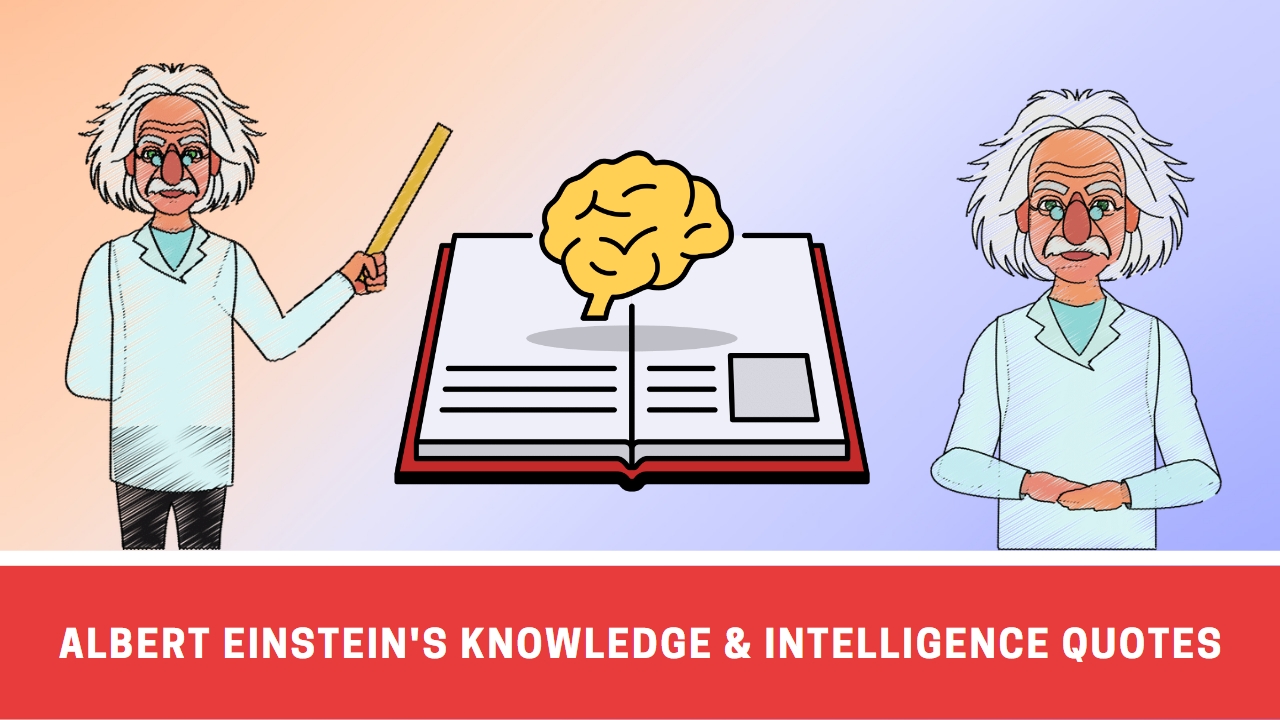 “The passing of Einstein gives us a chance to stop and think how it felt to have been alive while one of the authentic great minds of all history was doing its work” – By George R. Harrison

The estimated IQ of Albert Einstein is 160, despite the fact that he most likely never took an IQ test. He possesses one of the greatest minds the world has ever known. His theories altered the way we perceive the universe, and his name has come to represent genius.

The avant-garde movement of the 20th century, which called for a reevaluation of culture due to its scientific foundation, was largely inspired by Einstein. Not only that, but he continues to influence millions of people in terms of their outlook on life, education, intellect, science, and other matters.

Therefore, in this blog, we will talk about the various quotes by Albert Einstein on knowledge and intelligence that still holds the capability to empower youth and adults.

Albert Einstein is perhaps best known to you as the physicist who gave us the theory of relativity. Or perhaps you are familiar with him from his work on the formula that demonstrated how matter could be converted into energy.

But over time, he released several excellent life lessons in the form of quotations to encourage everyone, particularly kids, about the importance of information, education, and classrooms.

Here’s a peek inside his world of quotes:

1. “The important thing is not to stop questioning. Curiosity has its own reason for existing. One cannot help but be in awe when he contemplates the mysteries of eternity, of life, of the marvelous structure of reality. It is enough if one tries merely to comprehend a little of this mystery every day.”

2. “I am enough of an artist to draw freely upon my imagination. Imagination is more important than knowledge. Knowledge is limited. Imagination encircles the world.”


3. “We cannot solve our problems with the same thinking we used when we created them.”


5. “The greatest scientists are artists as well.”

6. “Science can flourish only in an atmosphere of free speech.”

7. “Nature shows us only the tail of the lion. But there is no doubt in my mind that the lion belongs with it even if he cannot reveal himself to the eye all at once because of his huge dimension.”

9. “Creativity is intelligence having fun.”

10. “It is important for the common good to foster individuality: for only the individual can produce the new ideas which the community needs for its continuous improvement and requirements — indeed, to avoid sterility and petrifaction.”

11. “The ideals that have lighted my way, and time after time have given me new courage to face life cheerfully, have been Kindness, Beauty, and Truth. Without the sense of kinship with men of like mind, without the occupation with the objective world, the eternally unattainable in the field of art and scientific endeavors, life would have seemed empty to me. The trite objects of human efforts — possessions, outward success, luxury — have always seemed to me contemptible.”

13.  “The state of mind which enables a man to do work of this kind … is akin to that of the religious worshipper or the lover; the daily effort comes from no deliberate intention or program, but straight from the heart.”

14. “Wisdom is not a product of schooling but of the lifelong attempt to acquire it.”

16. “The only source of knowledge is experience.”

17. “Unthinking respect for authority is the greatest enemy of truth.”

18. “As a human being, one has been endowed with just enough intelligence to be able to see clearly how utterly inadequate that intelligence is when confronted with what exists.”

19.  “Common sense is nothing more than a deposit of prejudices laid down in the mind before you reach eighteen.”

20. ‘’It is the supreme art of the teacher to awaken joy in creative expression and knowledge.’‘

21. ‘’The wit was not wrong who defined education in this way: ‘Education is that which remains if one has forgotten everything he learned in school.’’

22. “Any man who reads too much and uses his own brain too little falls into lazy habits of thinking.”

23. “The only thing that interferes with my learning is my education.”


24. “The whole of science is nothing more than a refinement of everyday thinking.”

25. “The gift of fantasy has meant more to me than my talent for absorbing positive knowledge.”

26. “He who joyfully marches to music in rank and file has already earned my contempt.”

27. “He has been given a large brain by mistake since for him the spinal cord would suffice.”

28. “Knowledge of what is does not open the door directly to what should be.”

29. “The true sign of intelligence is not knowledge but imagination.”

30. “The difference between stupidity and genius is that genius has its limits.”

31. “There comes a time when the mind takes a higher plane of knowledge but can never prove how it got there.”

33. “Whoever undertakes to set himself up as a judge of Truth and Knowledge is shipwrecked by the laughter of the gods.”

34. “The attempt to combine wisdom and power has only rarely been successful and then only for a short while.”

35. “Only one who devotes himself to a cause with his whole strength and soul can be a true master. For this reason, mastery demands all of a person.”

36. “The unleashed power of the atom has changed everything save our modes of thinking and we thus drift toward unparalleled catastrophe.”

37. “Everybody is a genius. But if you judge a fish by its ability to climb a tree, it will live its whole life believing that it is stupid.”

38. “Education is only a ladder to gather fruit from the tree of knowledge, not the fruit itself.”

40. “Education is not the learning of facts, but the training of the mind to think.”

How can the quotes inspire students?

Children have been and still are inspired by Einstein to ask why about everything. Only then would they be able to comprehend their surroundings. Because the doors to the imagination are opened by curiosity, and discoveries are made as a result.

In anything they do, adding value along the process is essential. Anything without value or unable to improve one’s quality of life is useless. Try to give your objectives more meaning since it expands when people give their attention to them.

With his extraordinary understanding, Albert Einstein warned us against always acting logically. Break the mold and try to be original. All of this was not accomplished by Albert Einstein by adopting other people’s ways of thinking. Being out of the ordinary in your behavior sets you apart. Additionally, he added that repeating the same thing repeatedly does not add value to life. Make an effort to improvise in all of your actions. You cannot keep doing the same thing and expect different outcomes.