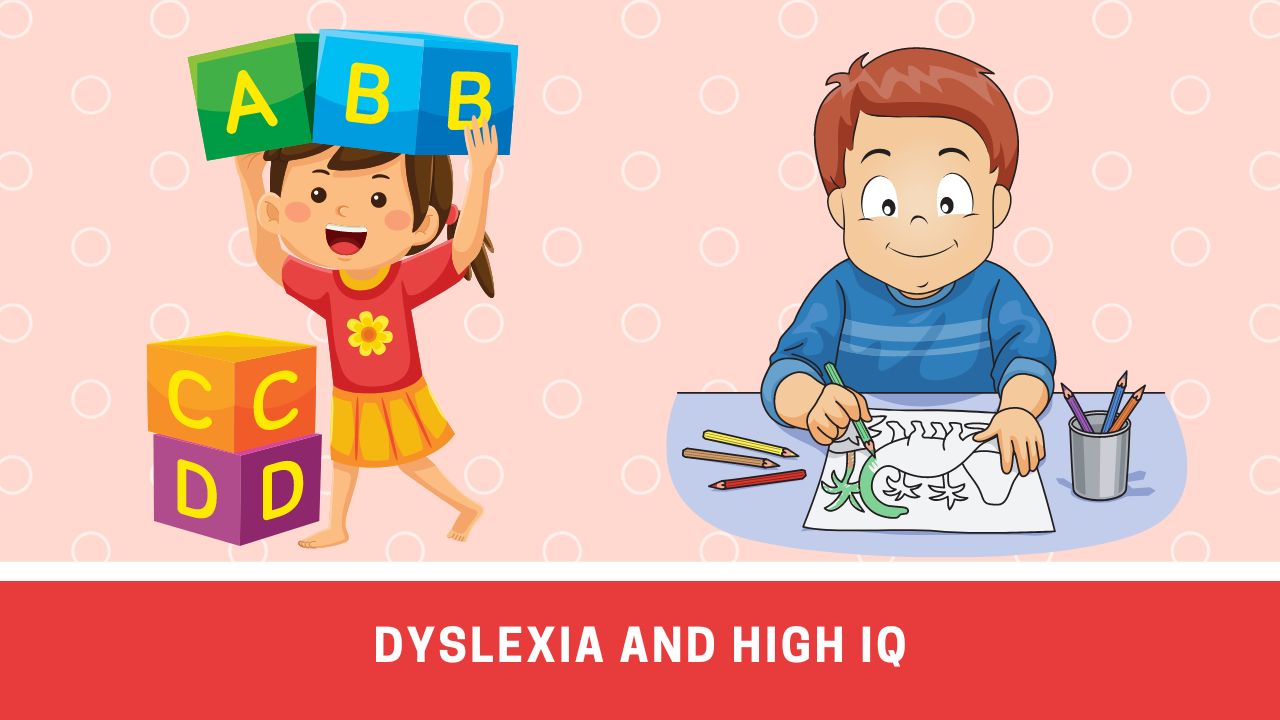 His teachers said he was mentally slow, unsociable, and adrift in his foolish dreams.

The man was Albert Einstein.

People must understand that there is nothing to be embarrassed by. When a child has a problem, some parents have a tendency to keep them hidden from others, which is not recommended.

A dyslexic child may or may not be a genius, which can be deduced in the following article. Read on to find out what makes a dyslexic child stand out or stand in with the regular populace.

The primary characteristic of dyslexia is a persistent difficulty in learning and correctly applying the skills of reading and spelling at the word level. To learn to read, dyslexic children require significantly more reading practice (technically). As a result, it’s critical to identify dyslexia as soon as feasible.

When dyslexic youngsters read aloud, their reading impairments are most obvious. Some young readers read the words as they are spelled because of their sluggish reading pace. Other kids read quickly, but they frequently misread words and make mistakes. There could even be a mix of the two.

Children who have dyslexia frequently spell incorrectly and create mistakes that last a long time. They require a lot of help from spelling rules to avoid them. It’s possible that they use different spellings of the same term on the same page.

Dyslexic kids frequently strive to recall the correct spelling of words. The pressure on the memory is tremendous. Additionally, because they retain the information in their memory in an unorganized way, it typically does not sink in.

Dyslexic children frequently rewrite their writing and use a lot of erasures. It is typical for students who write legibly to write slowly.

Although its precise etiology is not yet entirely understood, it is recognized that dyslexia is a neurological disorder. It appears that the part of the brain where sounds are connected to images is poorly developed or difficult to access. Incomplete or poorly processed sound codes are as a result stored in memoryless effectively. As a result, these are less easily recalled from memory.

It is evident that persons with dyslexia have issues processing language phonologically and/or quickly labeling words.

Dyslexic children can also be gifted kids. However, because of their great intellect, they may be able to make up for their reading, language, and spelling problems so successfully that no one will ever realize they are dyslexic, which means dyslexia as a whole is diagnosed too late or too early.

In the end, in high school dyslexia may result in language and spelling problems that they no longer can compensate for. To do a dyslexia test, is, therefore, strongly recommended.

Distinguished examples from around the world

Albert Einstein, Leonardo Da Vinci, and many other well-known and prosperous people had dyslexia despite having high IQs at birth. Some individuals with very high intelligence may also be referred to as “learning handicapped.” Despite having learning impairments as children, a lot of today’s superstars are where they are because of a variety of factors. Due to developments in medical sciences, diagnosis of these issues is more accepted in Western nations. High IQs and high levels of giftedness can coexist with conditions like dyslexia, ADHD, and dyscalculia.

Dyslexic children with high IQs who are talented may show extraordinary skills in certain areas and inadequacies in others. They might be misdiagnosed as “average performers” when they are actually talented but have learning disabilities. People may misinterpret their average marks for ordinary performance. Very intelligent kids can occasionally struggle academically without doing poorly on tests. They are only getting by. Don’t be afraid to send your child to a counselor or someone with experience with such issues because a thorough medical knowledge and diagnosis may go a long way in helping such students. You have nothing to be ashamed of.

According to Ron Davis, all dyslexics possess a set of skills that many well-known dyslexics who are regarded as geniuses also possess.

Dr. Linda Silverman of The Talented Development Centre has discovered that extremely highly gifted children frequently have a visual-spatial learning style and frequently struggle with learning issues that are typically related to dyslexia.

To learn more about the underlying cognitive profiles and potential for compensation in high-IQ children, this study examined risk and protective variables linked to dyslexia and literacy development, both at the group and individual levels. A group of 73 Dutch primary school students with dyslexia, a gifted-dyslexic group, and a borderline-dyslexic group was included in the sample (i.e., gifted children with relative literacy problems). Working memory, phonology, literacy, and language skills were tested in children. The core-deficit and twice-exceptionality views on compensating with strengths connected to giftedness were contrasted in competing theories.

The findings did not suggest that the deficits caused by dyslexia were made up for by the strengths caused by giftedness in dyslexic gifted youngsters. Compared to brilliant children with dyslexia, borderline children had greater reading levels, which appeared to be the result of both combinations of phonological impairments and less severe risk factors in this group. In the borderline group, there was no proof of compensation for particular strengths more important to literacy development. As a result, the data primarily supported the core-deficit hypothesis, while the twice-exceptionality view had no supporting evidence. The findings not only have consequences for practice but also advance our understanding of the many dyslexia symptoms and associated underlying cognitive processes at the higher end of the IQ continuum.

READ :   Can We Request An Emergency IEP Meeting?

In terms of risk and protective variables, compensating and masking, and talented children who read poorly compared to their IQ but do not satisfy diagnostic thresholds for low accomplishment (i.e., “borderline-dyslexic” children), this group of brilliant children is even more intriguing to research. Frequently, these kids are ineligible for treatment. In other words, these borderline kids exhibit some reading issues, but their IQs, and hence their “compensatory resources,” are on par with those of bright kids who do meet the dyslexia diagnostic cut-off. The core-deficit and twice-exceptionality theories are both put to the test by mapping the cognitive risk and protective characteristics of the two groups, which also reveals crucial insights into potential compensatory and masking mechanisms and explains the disparities in literacy performance.

The twice-exceptionality approach to compensating would be supported by children with dyslexia who have remarkable strengths. When comparing the cognitive characteristics of borderline and talented children with dyslexia, variations in overall intelligence were controlled for. It was assumed that this difference may be explained by either lesser impairments or the presence of certain protective variables more important for compensating, such as language abilities, or both, given the greater literacy level in the borderline group. It was necessary to approach both groups individually in order to provide further details on the combinations of deficiencies. The number of overall risk and protective variables in the groups was predicted to be the same. Instead, disparities in the development of literacy between the two groups may be explained by the breadth/depth of underlying impairments and particular strengths.

Grammar and vocabulary were assessed using the Clinical Evaluation of Language Fundamentals-4 NL (CELF; Kort, Schittekatte, & Compaan, 2010). The child’s grammatical abilities were evaluated using the subtest’s constructed phrases. Here, the youngster was required to use a certain word or phrase to create sentences (FS) describing activities or circumstances that were depicted in photographs. The kid selected two related terms and explained how they link to one another for the subtest word class 2 (WC2), which measured vocabulary. The analyses employed raw accuracy scores (FS max = 40, WC2 max = 40), which could alternatively be converted into age-referenced norm scores (M = 8–12). The subtests’ internal consistency values are.78 and.87, respectively (Evers et al., 2009–2012).

Graduate students under supervision who had all had intensive training in applying the exam battery mentioned above conducted the evaluations. Within a single 2-3 hour session, children were examined in a clinic, at school, or in their homes with plenty of pauses in between. The availability of recent and pertinent test data for the instruments used in the test battery determined how long the evaluation would last (i.e., IQ not older than 2 years, literacy not older than 6 months). The test findings were condensed into a brief report that was reviewed by a certified school psychologist and given to the parents of the participating children. Joint evaluation meetings helped to clarify any diagnostic ambiguities.

The cognitive profiles of children with dyslexia and general children who are averagely clever were compared while accounting for variations in reading level.

The initial comparison revealed that children with dyslexia not only had less severe deficiencies in PA and VSTM than children of ordinary intelligence but also had equivalent (poor) scores on the RAN. There is no evidence to support the idea that brilliant children with dyslexia have worse underlying impairments than children without dyslexia. The core-deficit theory is only partially supported by the same RAN scores in both groups. In addition, gifted dyslexic children performed exceptionally well across a wide variety of protective variables. The equal scores on grammar show that the high scores on other protective variables are largely independent of the scores on the risk factors since grammar is thought to be more strongly associated with literacy than most of the other factors.

This also broadly agrees with the core-deficit viewpoint. Given that both brilliant children and children with dyslexia who are averagely clever have identical RAN levels, it is likely that a RAN deficit is a significant risk factor underlying the reading deficiencies in both groups.

According to the second comparison, the borderline group’s less severe underlying cognitive deficiencies might account for their superior reading scores when compared to talented children with dyslexia, supporting the core-deficit theory. The univariate results revealed that brilliant children with dyslexia often have more severe deficiencies in PA and RAN, even if the multivariate results showed that the risk factor profiles between the two groups were equivalent. The case series studies also revealed that, in contrast to borderline children, bright children with dyslexia typically experience more severe phonological issues that frequently involve a mix of deficiencies. On VSTM, both groups received comparable results.

The compensation through particular protective factors, which would further explain the variations in reading levels between the two talented groups, was not supported by any data. However, additional forms of compensation are still conceivable, highlighting the value of future research into the function of protective factors in order to extend theories and support diagnostics. Due to a lack of further evidence which supports the fact that dyslexic children are gifted, it is safe to state that it’s destiny over science if a dyslexic child is born gifted or with a high IQ.