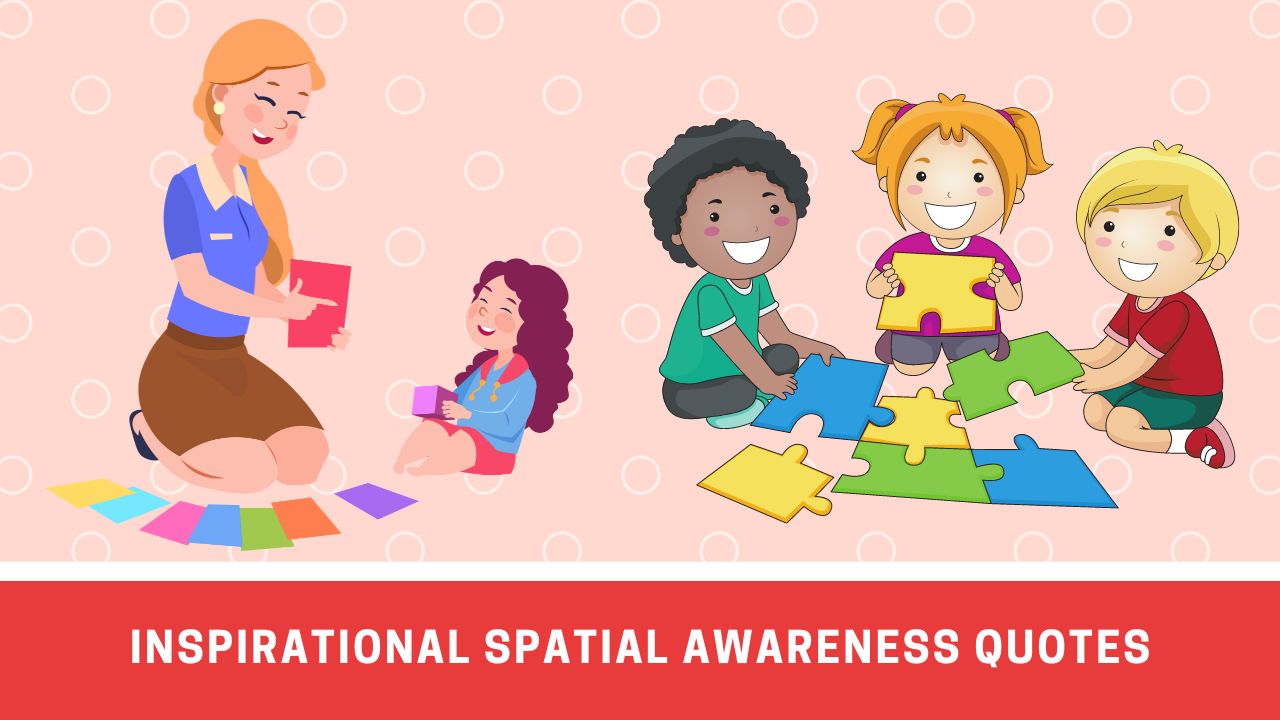 Spatial awareness can be referred to as one’s ability to understand and properly depict where their physical bodies are in accordance with the space, various objects, and other people around them. The skill of spatial awareness is very complex in nature and thus children start developing a sense to understand this from a very early age.

In addition to that, someone who possesses good spatial awareness skills has a good understanding of their surroundings and is quick to react to any changes that they observe around them. Furthermore, the skill of spatial awareness is very important for people to be able to properly function in society and play their respective roles. Thus, it is also important for people to learn about this skill and gain knowledge.

Spatial awareness makes one aware of the space/room they are in. However, they must not forget that room is not a boundary to humans. Instead, it came into existence to help humans. Here, room indicates barriers or challenges.

“Conscious mind is a spatial analog of the world and mental acts are analogs of bodily acts. Consciousness operates only on objectively observable things. Or, to say it another way with echoes of John Locke, there is nothing in consciousness that is not an analog of something that was in behavior first.” Julian Jaynes

The spatial awareness of mind and body comes from the coordinated function of consciousness and behavioral traits.

Spatial awareness is instilled in our brain just as awareness about language, music, numerical data, etc.

“I happen to love engineering. I love figuring things out in a spatial sense, that whole realm of working with mechanical parts, and the relationship of the parts, and things like ratios and the speeds of particular objects.” Arthur Ganson

Spatial sense takes in all the things going around. It considers the mechanics of tools and their relationship in terms of ratio, speed, etc., data.

“I’ve always been interested in space in pictures. I think my going deaf increased my spatial sense because I can’t get the direction of the sound. I feel that I see space very clearly, and that’s because I can’t hear it. So it’s a compensatory thing.” David Hockney

If one sense is damaged, there are always other supports that eliminate the disability. Spatial awareness becomes more vivid with stronger senses.

“Sense of place is the sixth sense, an internal compass and map made by memory and spatial perception together.” Rebecca Solnit

Spatial perception gives you a spatial sense that directs you down the right path.

Too much stress would harm spatial awareness sense.

“We become aware of the void as we fill it.” Antonio Porchia

Our contribution to society and our surroundings is what makes us capable of being more aware of the world.

“Spaces may or may not invite the image – if they do, they mostly do it with their spatial layers of time.” Candida Hofer

Spatial awareness of time that has already gone leaves images of it in our minds.

“As my awareness increases, my control over my own being increases.” William Schutz

With a high level of spatial awareness, people are also able to grow their senses and are better able to understand themselves.

“There’s the added element of adrenaline if you’re performing. You are aware of the spatial relationships and the music.” Kim Gordon

While performing art, spatial awareness relates the body to the music the performance is aligned with.

“Spatial art does not begin with a poetic mood or idea, but with the construction of one or more figures, with the harmonizing of several colors and tones, or with the devaluation of spatial relationships and so on.” Paul Klee

Spatial awareness is so strong that it creates harmony among colors, tones, figures, and ideas by forming a spatial relationship.

The whole universe is running on balanced spatial awareness between thoughts and consciousness.

“I believe that gut feelings, the sense of balance, and spatial self-perception are so firmly coupled to our biological body that we will never be able to leave it experientially on a permanent basis.” Thomas Metzinger

Spatial awareness or perception is integral to our existence and an inseparable part of our living.

“I think what art is always doing is making us see the world so differently, and I don’t mean just colors and light, but re-thinking relationships, spatial relationships, psychological relationships … those who gravitate to the art world actually want to be puzzled.” Roselee Goldberg

Spatial awareness forms a strong relationship with psychology and enables you to grow perceptions about everything around you.

“At pains to define liberty, that most resolute of indefinables, our minds fall back on spatial images; on birds, sailboats, and mountains; the untethered balloon, the blue sky, the nude figure.” Robert Grudin

Where words fail, spatial awareness helps describe a feeling by referring to other elements symbolizing the word or the feeling.

“The better awareness, the better your choices. As you make better choices, you will see better results.” Anonymous

When one is aware of their surroundings, they have a good understanding of the things happening around them. With understanding comes the ability to make proper decisions, ultimately bringing better results.

“We must not allow other people’s limited perceptions to define us.” Virginia Satir

When one understands the space around them and is completely aware of the changes that are taking place, they start to realize their internal conflicts and questions better than they could before. This helps in reaching the state of self-actualization.

“I think I understand something about space. I think the job of a sculptor is spatial as much as it is to do with form.” Anish Kapoor

A sculptor thinks not only of the shape and size of artwork or installation. They need to worry about the space it should be presented in. Thus, spatial awareness becomes necessary even in intricate works like that of a sculptor.

“Beyond the astral dimensions are the causal dimensions. They are not spatial or time-oriented. They are planes of light, and they make up the outer limits of nirvana.” Frederick Lenz

You can attain nirvana or freedom from all bondage because your spatial awareness combines the astral and casual dimensions.

“As our awareness grows, so we grow.” Anonymous

With time, we become more honed when it comes to the skills we possess in the field of spatial awareness. With this growth of awareness, we are also able to grow more as human beings enabling us to reach a state of success.

“It’s worth making time to find the things that really stir your soul. That’s what makes you really feel alive. You have to say ‘no’ to other things you’re used to, and do it with all your heart.” Roy T. Bennett

When one is aware of their surroundings and is able to properly identify the changes around them, they are able to find things that matter to them the most. These things define that person. Thus, without awareness, the true meaning of one’s life would be very fickle.

“Be present in all things and thankful for all things.” Maya Angelou

In order for one to be humble and thankful for the things that they have been given in life, they need to be aware of the space around them. Thus, awareness is the key to being thankful and humble.

“If you’re walking with somebody, you’re heading in the same direction, and the spatial dance you’re doing is a little more cooperative.” Scott Kim

While working toward a shared goal, you both trod the same road to reach the goal sharing the same spatial awareness about each other.

First, it is true that a spatial order organizes an ensemble of possibilities (e.g., by a place in which one can move) and interdictions (e.g., by a wall that prevents one from going further).” Michel de Certeau

There will be both opportunities and challenges in life. Spatial awareness makes sure we maintain a balance between these.

To conclude, this post shines a light on various inspirational spatial awareness quotes that people have been known for using to motivate and inspire others about the skills of being spatially aware. Spatial awareness is one of the most important skills people need to function properly and fulfill their societal roles and responsibilities.

Spatial awareness helps people understand their surroundings, other people around them, and other objects and allows them to react to any changes that may occur around them. Thus, it is very important to spread awareness about this skill and its impact on our daily lives.