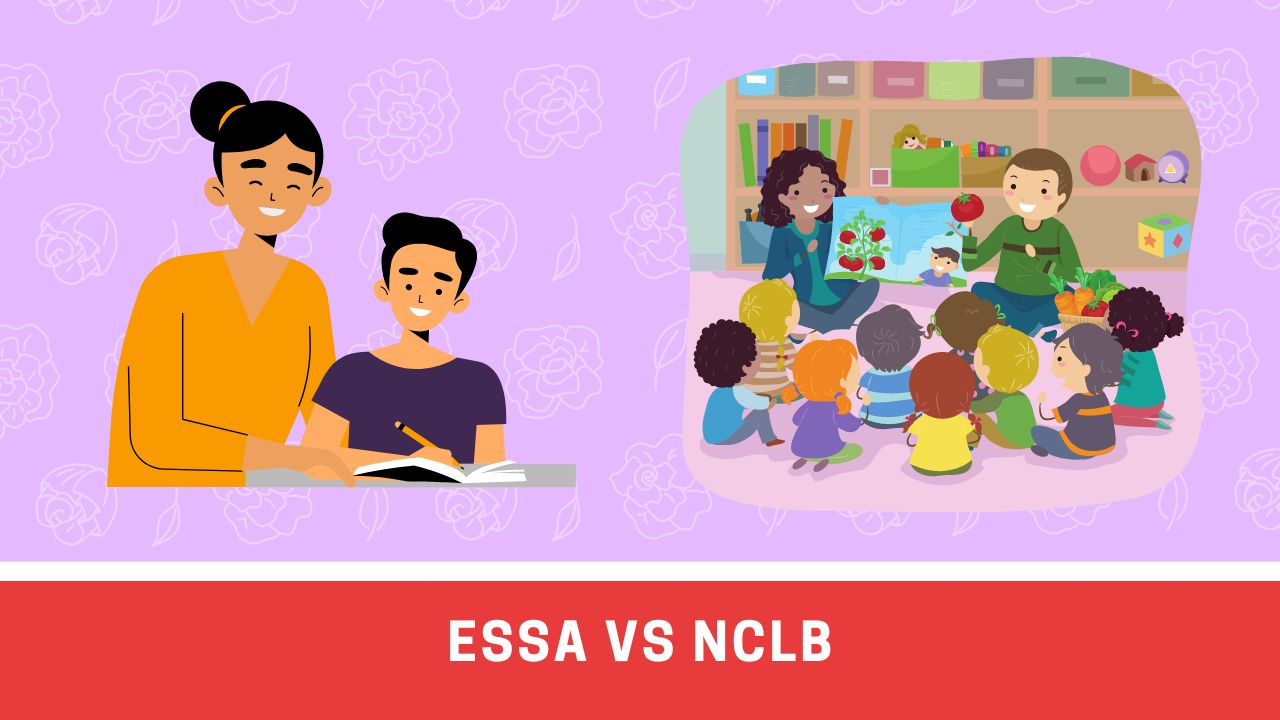 Are you aware of federal laws governing children’s education in the US?

If not, let us introduce you to ESSA and NCLB. ESSA is the current law governing K-12 education in public schools which replaced the previous law known as NCLB. Both are updates to The Elementary and Secondary Education Act which was passed in 1965. Ever since the law has been changed several times to bring necessary changes in the education system. NCLB and ESSA were brought into effect to keep a check and support education in the school system, but both are different in quite a few ways.

Before we dig into the differences, let’s gather a basic understanding of each one of them.

NCLB: No child left behind

In 2001, the NCLB Act passed Congress with bipartisan support. It came into force on January 8, 2002, when President George W. Bush signed this new education act.

The act was formed to address the concern that America’s education system was not internationally competitive compared to the educational standards of other countries. The law gave more power to the federal government, which could now hold schools responsible for not making the desired progress.

It also emphasized the need to support specific groups of students, like special education kids, and underprivileged kids, as they struggle more with learning. Although schools were free to choose whether to follow the law or not, they had to pay a heavy price of giving up on Title I money issued by the federal government.

ESSA is the latest law governing the K-12 education system in the United States. After the NCLB act was due for revision, the government wanted to create a law that would focus on preparing students in academics so they could successfully attend college and excel in their careers. Keeping that in mind, President Barack Obama signed ESSA on December 10, 2015.

The act requires that all students receive quality education to enhance their academic standards. It is open to helping educators bring innovations in the field of education, like evidence-based interventions to support struggling students. The law enforces state-wide assessments to periodically test student progress and hold low-performing schools accountable if their academic results are consistently low.

READ :   6 Manipulatives For Teaching Angles And Its Related Concepts

How is ESSA different from NCLB?

ESSA and NCLB were designed with the same objective of providing good education to all students in the country. However, the two have some key differences that set them apart. Let’s have a look at them sequentially.

ESSA – The main difference between both models is in terms of accountability of schools. As per ESSA, state governments are responsible for holding the schools accountable. They have the flexibility to set their own requirements by staying with the framework provided by the government.

NCLB – Although the state governments were responsible for looking over schools, they had less flexibility in terms of setting their own goals. The law put forward a common goal for every school, stating that all students must be proficient in math and reading, irrespective of their learning capabilities.

ESSA – The law needs students to appear for periodic assessments. But the states can set their own ways of conducting the tests. Schools have the flexibility to utilize different tests that would test students’ learning more accurately.

ESSA – The Common Core Standards are set by a state-led effort to decide what topics must be a part of the common core, how they must be taught, and how they can be assessed. The ESSA allows states to decide for themselves if they wish to adopt the common core.

NCLB – The law did not deal with anything related to Common Core Standards, as the concept came into being years after the law was enforced.

ESSA – Schools are expected to adopt academic standards that are somewhat challenging for students to allow them to overcome those challenges and excel academically. The federal government, however, has no say in the standards a school must adopt.

NCLB – Under NCLB also, schools were supposed to use a challenging curriculum. And the government could suggest schools adopt a particular set of academic standards if deemed necessary.

ESSA – The law expects states to set grade-level achievement targets for students. For students in special education, the state must set ambitious targets to help those students meet their grade-level targets.

NCLB – States were expected to bring all students, irrespective of the learning differences, to a level of proficiency that was determined through assessments.

ESSA – The state or the local school districts may devise strategies to help struggling schools. They must have a plan to address issues like high drop-out rates, struggling groups of students, etc.

NCLB – Under this law, the local school districts and the state had a limited role in devising strategies for struggling schools. In fact, the federal government shared its inputs for improving the school’s academic results.

ESSA – A national literacy center is created under ESSA to address the literacy issues of students struggling with different learning disabilities, including dyslexia.

NCLB – A literacy center focussing on the challenges of students with reading and other literacy difficulties was not formed when the law was in force.

ESSA – The law encourages personalized learning to help students meet their academic goals. It also recommends Universal Design for Learning to fulfill the needs of students, including those with learning differences.

NCLB – The NCLB had no such provision to offer personalized learning or UDL for the academic enrichment of students.

ESSA – There is no such option for opting out from assessment even if parents want to do so. However, the states are not forbidden to create their opt-out laws if they want to.

NCLB – The NCLB does not allow any such provision for opting out, even if the states wish to implement it.

ESSA – The law encourages states to take feedback and opinions from parents about academics and other school activities to develop state plans on education.

NCLB – It did not support parent involvement to devise state plans. And therefore, parents could not contribute by sharing their ideas and opinions.

ESSA and NCLB were formed with a vision to provide quality education to all students in the country. While NCLB gave the federal government more authority in managing the education system, ESSA increased the role of states and local school districts to maintain high academic standards in the best possible way.