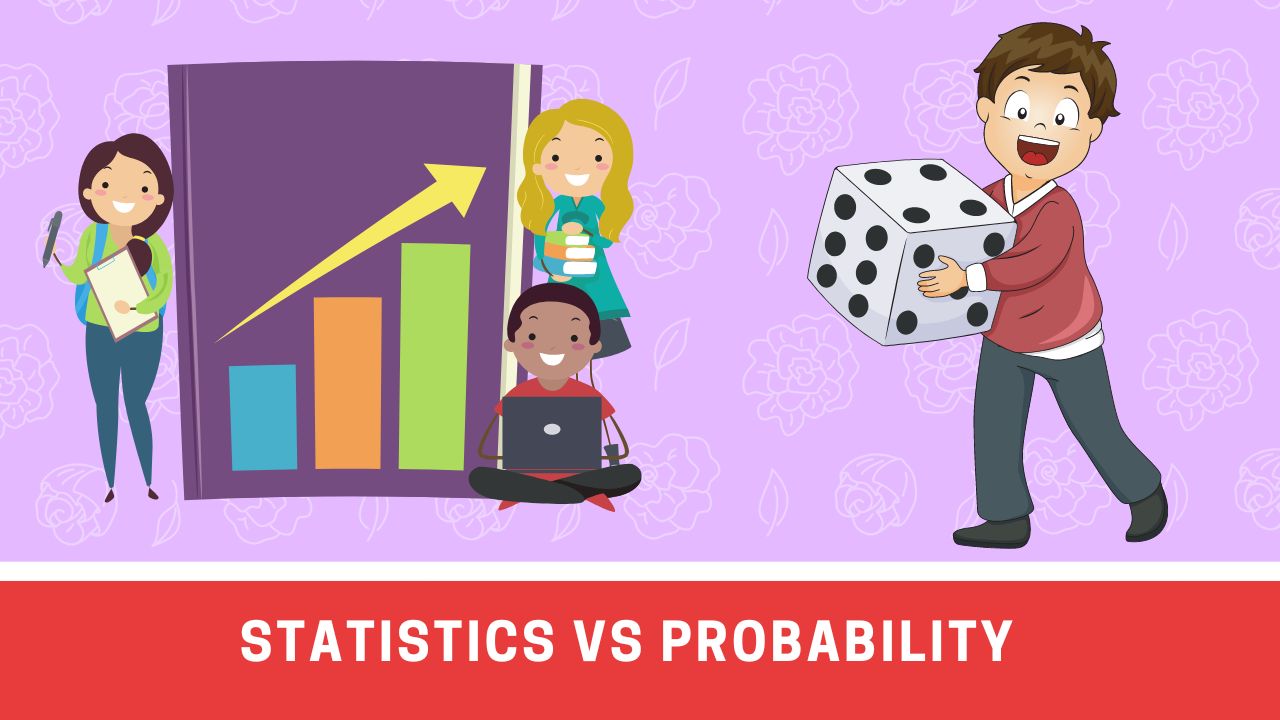 When we say, “96% of the people think England will win the match”, we are giving a figure that has come after particular research and observation. On the other hand, if we are saying “England has a strong team, hence they have a great chance of winning the match” in this situation, we are imposing a situation based on the probability of the event occurring.

Going by this example, we can easily comprehend that the two terms are poles apart in terms of credibility and surety of occurrence. But, a lot of people still use these terms interchangeably. However, statistics and probability mark significant differences. Therefore, in this post, we will discuss the core definition of each and learn more about the in-betweens before delving into comparisons, pros, and cons of Statistics and Probability.

Statistics vs probability: Explaining the concepts with examples

The meaning of probability is the possibility for something to occur. In mathematics, it is the concept that works on the idea of the likelihood or chance of an outcome. It can have various degrees such as certainty- assured occurrence of an event, likely- higher chance of the event to occur than another event, equal probability- chance of every outcome is the same, unlikely- one event is less likely to happen than another event, impossible- no chance of an event happening.

Let’s understand this with an example of a dice. With six sides and numbers from 1-6, it is certain that any number from 1-6 will be shown on top. All numbers from 1-6 also have an equal probability to show. The number 8 is impossible to show as it is not on the dice.

The most common example of probability is a coin. Let’s assume you have a fair coin that is two-sided with heads or tails on each side. Now, the chance of getting heads with every toss is 50% or ½  and so is the chance of getting tails since we can either get tails or heads. This chance is called probability. The same works with a dice. On a six-sided dice, only one number out of the 6 can show on the top, making the chance of each number on the dice ⅙.

Since we can already predict the chances of getting particular results, the probability is a well-measured estimation of probable outcomes.

This is an independent subject but employs the concepts of mathematics in the collection, organization, presentation, analysis, and interpretation of data. Theories of probability may be applied in statistics to draw conclusions but, in statistics, we infer and interpret probability that is merely based on prediction and estimation.

For a better understanding, let’s take the coin toss example. If a coin is tossed 100 times and we get a 60 heads result and 40 tails. Now, in this case, statistics will be applied in a way that this data will be written down in terms of the frequency of the coin landing on heads or tails. On the basis of the data of results noted down, analyses and interpretations will be made.

Is there a connection?

For tasks done through everyday life and even for technical agendas, we often include an element of probability and prediction of outcomes. In other terms, it is the investigation of whether or not something will occur, making it a handy and essential concept. The use of probability is diverse in our real life on a daily basis which makes it a crucial concept.

READ :   11 Online Games To Learn The Correct Usage Of Punctuation

Similarly, statistics also plays a crucial role in our everyday lives without realizing it and has its applications rooted in real life that goes beyond academics and technical uses.

Statistics is a discipline of mathematics concerned with the gathering, organizing, displaying, analyzing, interpreting, and presenting of data. The connection is that we use probability (probability theory) to infer conclusions from data in statistics. Probability cannot exist without statistics and vice-versa.

Statistics vs probability: Table of comparison

Statistics Vs Probability: Which is harder?

Probability is not just limited to set and counting, predicting outcomes, value questions, and probability distribution. Probability is a lot to understand, which can be tough for certain pupils. Furthermore, the issues can be perplexing. Since a lot of aspects of probability can be based on intuition, one may be in misinterpretation making the right prediction which may or may not be correct. The ambiguity causes this issue. The easiest approach to avoid this is to go through a large number of problems till you can see the proper approach for addressing frequent difficulties.

READ :   What are the 504 Accommodations for Learning a Foreign Language?

The most difficult aspect of statistics is determining how to tackle each problem. Once the correct logic is grasped and the appropriate formulae are chosen to solve a specific problem type, the real math calculation is relatively simple, requiring only basic algebra and calculator abilities. It may be challenging at first, but it is similar to learning a new language in which once the fundamentals are grasped and practiced, it becomes a lot easier. Statistics don’t really deserve their poor reputation because, at its foundation, it is not a difficult matter.

Probability has always been regarded as a challenging field of mathematics because probabilistic reasoning sometimes produces seemingly contradictory and counterintuitive outcomes. Statistics can also be perplexing when it is taught alone without foundational concepts.

Most students do not truly comprehend and apply statistics unless they begin examining their studies’ data. Evaluating one’s own data and keeping practicing how to compute results is one of the successful ways of learning statistics fluently.

Statistics is an interesting field that revolves around the joy of finding, learning, and questioning existing ideas. Statistics aids in the generation of new knowledge. On the other hand, probability comes with many everyday uses and aids in many activities.