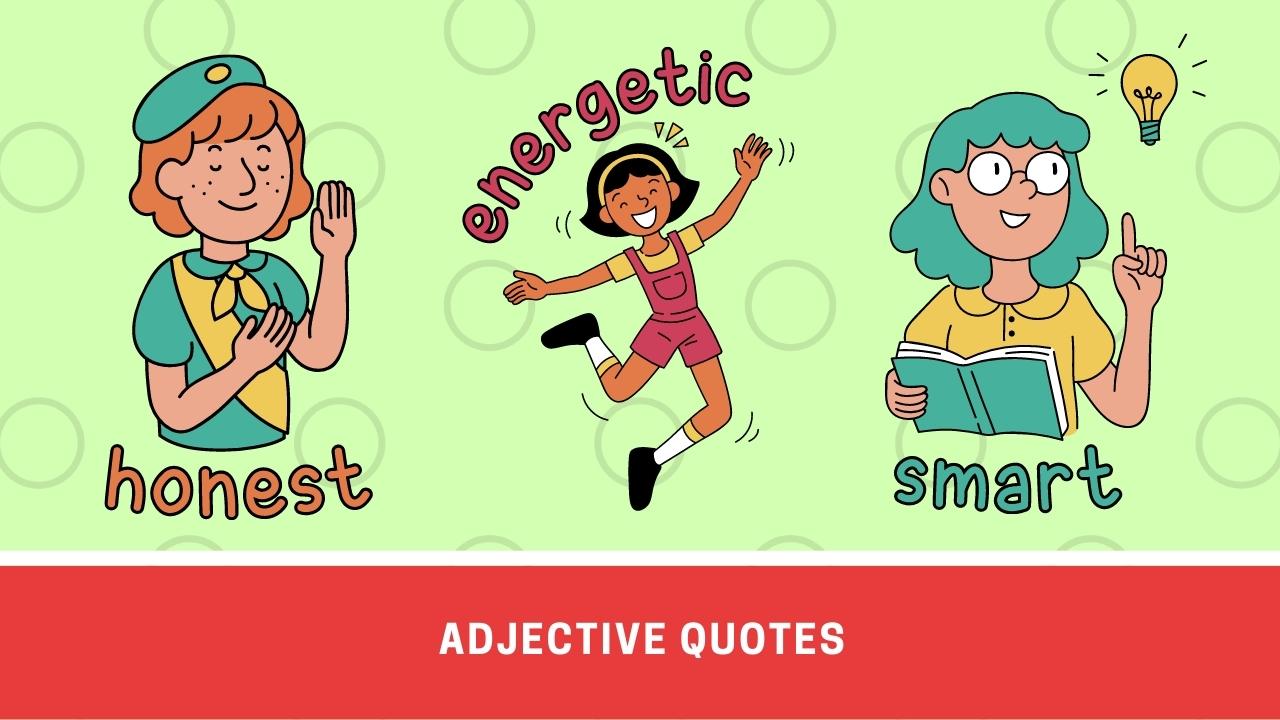 Can you imagine reading a story or listening to one, without all the intricate details? These words that add more information about a noun and describe it, are adjectives. Adjectives help us imagine scenes and words we listen to. They are the words that help us create beautiful images in our minds while reading. Imagine describing a story scene without the usage of adjectives. It makes the narration appear flat and lifeless. In contrast, even a weak storyline can be made interesting through the use of descriptive words and a good vocabulary.

Adjectives are powerful words in any language. They help make your writing clear and concise by adding detail to what you’re saying. When you use the right adjective at the right time, it can really make all the difference between being understood or not understood by your listener.

It adds more power to the words. Children can develop an interest in the language once they know how to use adjectives and improve their power of communication. Children may discover a love for writing prose or poetry once they know to appreciate adjectives.

1. A man’s character may be learned from the adjectives which he habitually uses in conversation.- Mark Twain

2. Atticus told me to delete the adjectives and I’d have the facts.- Harper Lee

3. If the noun is good and the verb is strong, you almost never need an adjective.- J. Anthony Lukas

4. Adjectives are the sugar of literature and adverbs the salt.- Henry James

5.“I notice that you use plain, simple language, short words, and brief sentences. That is the way to write English – it is the modern way and the best way. Stick to it; don’t let fluff and flowers and verbosity creep in.- Mark Twain

6. The adjective is the banana peel of the parts of speech.-Clifton Fadiman

7. What is an adjective? Nouns name the world. Verbs activate the names. Adjectives come from somewhere else. The word adjective (epithet in Greek) is itself an adjective meaning ‘placed on top, ‘added’, ‘appended’, and ‘foreign’. Adjectives seem fairly innocent additions but look again. These small imported mechanisms are in charge of attaching everything in the world to its place in particularity. They are the latches of being.- Anne Carson

9. If you need three adjectives to describe something, then you’ve probably chosen the wrong something.- Roger Rosenblatt

10. When you catch an adjective, kill it. No, I don’t mean utterly, but kill most of them–then the rest will be valuable. They weaken when they are close together. They give strength when they are far apart.- Mark Twain

11. They have a temper, some of them – particularly verbs, they’re the proudest – adjectives you can do anything with, but not verbs.- Lewis Carroll

12.I haven’t changed much, over the years. I use fewer adjectives, now, and have a kinder heart, perhaps.- Angela Carter

13. As to the adjective: when in doubt, strike it out.- Mark Twain

14. Language rarely lies. It can reveal the insincerity of a writer’s claims simply through a grating adjective or an inflated phrase. We come upon a frenzy of words and suspect it hides a paucity of feeling.- Irving Howe

15. The adjective hasn’t been built that can pull a weak or inaccurate noun out of a tight place.- William Strunk, Jr.

16. When we put words together – an adjective with a noun, a noun with a verb, a verb with an object – we start to talk to each other. – Donald Hall

17. Never send an adjective on a noun’s errand. — John Ciardi

18.“Moods are adjectives of the grammar of life.”― Raheel Farooq

19. One day the Nouns were clustered in the street.

An Adjective walked by, with her dark beauty.
The Nouns were struck, moved, and changed.
The next day a Verb drove up and created the Sentence. – Kenneth Koch

20. The real greatness tends to be a verb much more than an adjective, and it’s a duty preceding being an honor. – Ammar Moussa

Can quotes help with better inculcation of adjectives and grammar?

Grammar is a very important part of writing and speaking. It can be learned easily with the use of quotes. Quotes help to learn grammar, punctuation, capitalization, and italics.

Studies[1] have suggested that the physical act of singling out a quote and physically copying it, needs careful reading and concentration on the part of the reader. It gives a greater understanding of the mind of the writer of the quote and promotes active reading.

Such practices help the child to learn more effortlessly and develop an interest in the subject.

A good quote adds credibility to whatever is being conveyed. It adds humor and makes the class more interesting.

Researchers[2] also mentioned that inspirational quotes had a significant effect on both immediate and delayed recall of abstract vocabulary. Based on these findings it is concluded that inspirational quotes can be utilized not only as a supportive context for teaching and learning abstract vocabulary but also as motivational, emotional, and meaningful pedagogical sources.

Quotes, therefore, stimulate one to make an effort to concentrate and read, thereby making an impact on the mind of the reader.

In addition to helping one improve knowledge, the quotes also serve to inspire as we tend to learn from the experience of others. These factors make the usage of quotes a very helpful tool to teach a subject.

To conclude, it is important to remember that quoting a famous personality and their thoughts alone, will not make us grammar experts. However, using quotes in our writing can help us to remember the rules of grammar. Grammar is sometimes challenging to learn. But as it is an elementary pillar of the language, it needs to be focused upon. Quotes draw our attention to subjects like this.

Rules are important in grammar. If we focus on them too much, it may seem intimidating and one may miss out on important points in learning grammar! So instead of focusing on rules too much, let’s focus on how those rules are used by people who want us to follow them by reading quotes and understanding how the grammatical rules have been used.