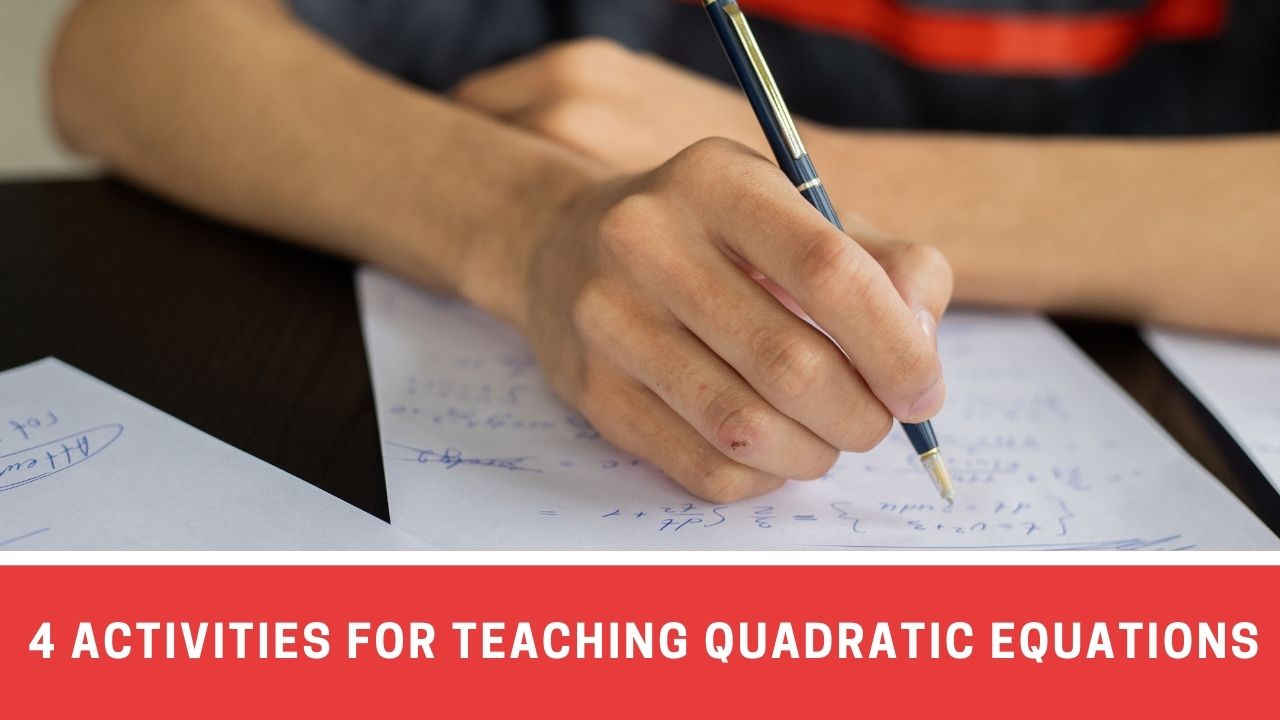 Its uses in the real world are innumerable, although often less obvious. Anything involving a parabola requires the quadratic equation, which can range from shooting a rocket in outer space to pricing your products for sale.

However, this concept of the parabola is lost on the students many times. Often, it multiplies their fear of math much faster than the time required to solve the self multiplied variable.

In such a scenario, it is not only important to enlighten them on the significance and utility of quadratic equations in real life, but also to make quadratic equations seem friendlier to solve. Also is required alongside, a dash of entertaining classroom activities to get rid of the math fear.

Once, the students overcome this fear, learning the quadratic equations will just be a step in broadening the horizons to reach the zenith of mathematical problem-solving. Some of these classroom activities for teaching quadratic equations are discussed below.

1. Get started on the graph paper

Solving equations on the graph by actually plotting and assigning values to the unknown variable is a fun way to help the child understand the relevance of the equation and see a parabola form in front of his eyes.

Initially, the value assigned to ‘a’ in a standard quadratic equation ax2+bx+c should be kept as 1 and slowly the complexity of the graph plotting task can be increased.

The graphs thus formed, can be displayed on the classroom workboard and compared with other graphs by other students.

Decorating your classroom with algebraic and factoring pennants is an interesting way to ease the fear of quadratic equations from the minds of the children.

These trinomial pennants help the students understanding the importance of quadratic equations in factoring.

Competition between two groups of students to solve the trinomial pennants and then use them as decorations for the classroom can be an interesting way to kindle that math fire in them.

This can also help them in deciphering a pattern within the final values and thus, predicting other possible outcomes.

Teaching geometry with quadratic equations is also an exhilarating way of ensuring interlinkages between algebraic concepts in the minds of the students.

The students can be given quadratic factoring equations as areas of geometric figures and asked to solve them in order to decipher the length and width of squares and rectangles.

READ :   What are the Functional Math & Number Sense IEP goals? Strategies to achieve these

For example, if the quadratic equation of the area is:

then the length and breadth of the geometrical shape are x+4 and x+2 as both of them multiplied to give the said area. Thus, it is safe to assume that it is a rectangle rather than a square.

Similarly, various quadratic areas can be given to the student to decipher its length and breadth, and consequently the geometry.

Tall and Thomas, in their 2002 study , while stating the importance of algebra and quadratic equations warn that “there is a stage in the curriculum when the introduction of algebra may make-Simple Things hard, but not teaching algebra will soon render it impossible to make the hard things simple”

Zakaria& Maat (2010) in their study conclude that errors in solving quadratic often occur due to the weakness in understanding the concept. Hence, the need of making the process of making harder things simpler and clearing the clouds of doubts against basic concepts cannot be emphasized enough.

While making the classroom the arena for this mind battle of students with math, it is important to make sure that they are ready to pick the arms every time they fall or get the equation wrong. For this, math has to be served with a dashed of creativity to take of its edge.