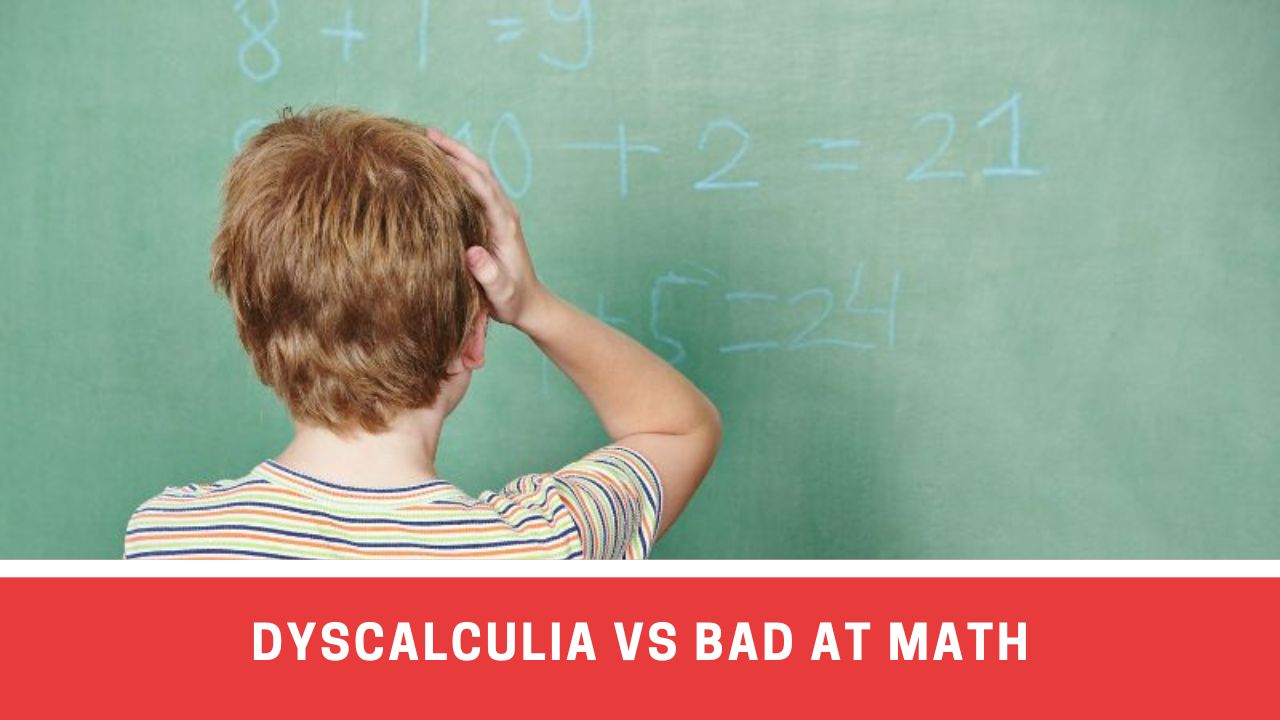 Often, when we think of the word Dyscalculia, it comes to our mind that it merely means the inability to calculate or solve any mathematical problem. Many use the words- dyslexia of mathematics synonymously for dyscalculia. However, this developmental learning disorder is a lot more than that. There are certain clinical features that differentiate Dyscalculia from simply having a hard time at math.

This draws a line between not being able to understand mathematical concepts simply because they seem difficult, and having developed a deficit; acalculia- the inability to count. The difference not only lies in the intensity but also in the clinical abnormality present in those with Dyscalculia.

In this post, we will talk about the differentiation in having dyscalculia, and just being bad at math.

Dyscalculia Vs Bad at math: What is the difference?

As explained by Butterworth, a renowned professor of cognitive neuroscience at University College London, Dyscalculia is caused by developmental differences in the structures and patterns of activation in the brain. Therefore in a way, dyscalculia occurs due to different brain activity.

Being a learning disorder where the power to understand and retain math is affected most, many people think they are just bad at math, however, affected learners with dyscalculia show a deficit in the ability to accurately represent the number of objects in a set and selecting the larger of two numbers.

Let’s think of it in a different way- Imagine someone who might be having a hard time solving a problem of algebra will not necessarily be diagnosed with dyscalculia. But someone suffering from dyscalculia might not be able to solve an algebra problem. The major difference can be explained with two simple words and the difference between those- difficulty and inability.

Being bad at math, struggling to get good scores, and experiencing difficulty while trying to understand a concept is not a disorder or a deficit in development. On the other hand, being unable to count numbers forward or backward, It is a functional impairment associated with deficits in the brain, as mentioned earlier.

Roi Cohen Kadosh and Vincent Walsh explain[1] that dyscalculia is not solely an indication of a general cognitive deficit. To be classified as having dyscalculia, an individual must have challenges with numerical abilities. Other factors such as education, intelligence, motivation, or other disabilities, cannot explain the underachievement in a class test relative to peers’ scores. Simply put, when a child scores poorly in other subjects, consideration of having a learning disorder is next to negligible, similarly, when the child underachieves in math, they doubt themselves of having an LD like dyscalculia. However, it should be taken into consideration that there could be other factors that could be responsible for being poor at Math, rather than just having dyscalculia.

The same is unfolded by Professor Brian Butterworth[2]. It is rationalized that there are many reasons for being bad at math such as inefficient teaching, and behavioral and health problems, all of which affect each concept is built on the one before, math being a paradigm example, rather than those which comprise a variety of loosely-connected topics such as history or literature. Be that as it may, dyscalculia appears to be a persistent congenital condition that can affect the ability to acquire arithmetical skills right from birth. Either inherited or caused by environmental conditions, dyscalculia too is a congenital condition[3].

Dyscalculia Vs Bad at Math: Differentiating by examples

As much as the two overlap- being bad at math and suffering from dyscalculia, the differentiating intensities are evident in various day-to-day examples.

Many people may find trigonometry difficult but people with dyscalculia cannot even solve simple problems such as 4+7 or 4×5.

In another example, if learners with dyscalculia were shown two playing cards- displaying the number 5 and number 8, and were asked to say which card was larger, they would count all the symbols on each card.

Or, if they were asked to count backward from 10, they would count up from one to ten and then one to nine, then one to eight, and so on.

In a focus group study done by Butterworth, that we talked about above, had nine-year-old children with dyscalculia told the researchers when asked about what goes on while trying to understand the concepts of numbers:

Child 1: “Sometimes she says stuff fast, and then I just forget it.”

This shows the significant difference in the inability to even comprehend numbers or anything to do with numbers in children with dyscalculia as compared to those who have difficulty being efficient at math as a subject.

Not just bad at math: 9 things to know about dyscalculia

Until now there is one thing that has been reiterated and emphasized, and that is, that dyscalculia is a disorder, associated with certain brain abnormalities rather than just a composition of symptoms that make it hard for the learner to solve math problems. Having said that, the symptoms of dyscalculia are not the same for everyone. Here are 10 things about dyscalculia that are not centered around mere quantitative or mathematical abilities.

READ :   IEP Goals For Self Advocacy

Dyscalculia is an underdiagnosed disorder that is very prominently presumed to be associated with just being bad at math. Being bad at math is a part of dyscalculia and There are very few interventions developed for learners suffering from it. However, there are some evidence-based approaches that have proved to be supportive of the same. One of which is called Dynamic (Interactive) Assessment[5]. It aligns with Vygotsky’s theories of the importance of social interaction to learning and incorporates the three elements of diagnosis, assessment, and intervention.

In addition to this, the internet has some free applications that can be used to improve cognitive function. Diving into making basic concepts such as multiplication, geometry, and calculus and how they can be learned with the presence of dyscalculia will help significantly. As there is more awareness about how dyscalculia affects our number sense, the path to conquering it will be paved.