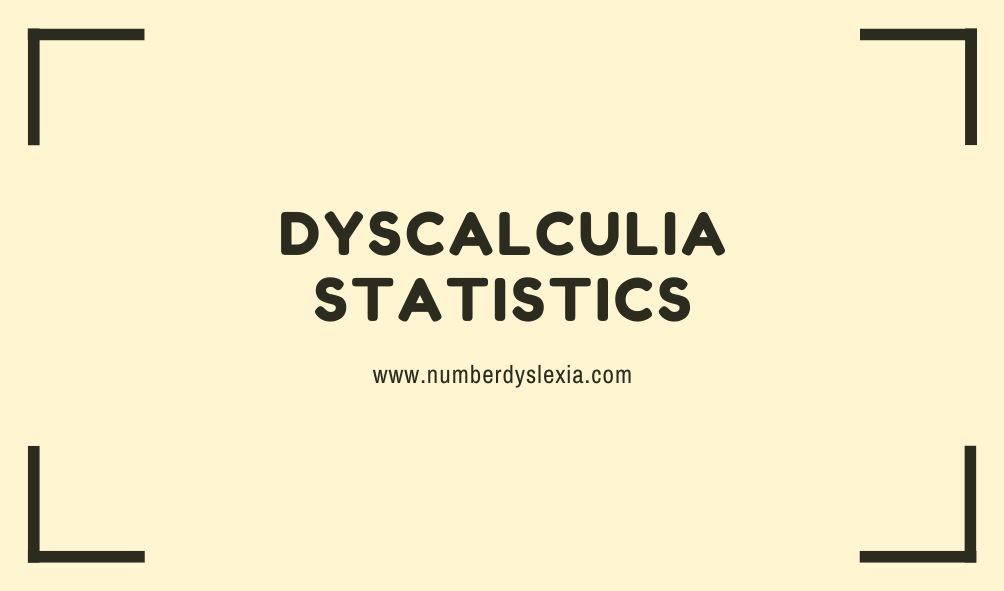 Dyscalculia, commonly known as ‘dyslexia’ with numbers, has been under scanner for a long time now. Some mathematicians started identifying it in their students about several decades back. They identified a dyscalculic student as a slow learner, but gradually with research and attention, they were able to connect it with neurological disorder of permanent nature – dyscalculia.

So, what are the current facts related to this order?

Where is the research headed to?

Actually, picture is still not clear as yet. According to statistics reported by AboutDyscalculia in 2008 shows that 6% of the population is found to be affected by a specific mathematics related difficulty. The numbers have been on still since then.

It is worth noticing that dyscalculia is not restricted to a certain part of the world. Its cases are rampant all across the world. Studies conducted in the US, Australia, Brazil, India, Malaysia and several other countries confirm the fact that it is a matter of international concern.

Researchers have been trying to attribute the occurrence of dyscalculia to various factors. First is age. About 5-6% cases of difficulty in learning and doing mathematical calculations were found in school-aged population.

Robert Peard, in his paper at ICMER (2010) has shown concern that there is clear misunderstanding between the learned difficulty and genuine dyscalculia. He proposes that the cases of genuine dyscalculia are just between 1-2%. Poor identification, according to him, has been one of the prime reasons why this disease has managed to stay among us.

The study he conducted included a man in twenties and another woman who was in her forties. They abandoned the studies at year 10 and year 12 and have been doing jobs that did not involve much math. On the basis of questions put to them, he concluded that those having learned difficulty can overcome the problem of doing mathematical calculations with regular guidance and practice, but dyscalculic person will not be able to do so.

His findings help understand the fact that school-aged population is not the only group that is identified with this disorder. The problem continues to persist in old age due to factors such as, discontinued education, absence of maths calculation activity due to doing physical labor mostly as a part of job requirement, and presence of friends and family who can do calculations, measurements, etc. on behalf of the person.

Effect of urban and rural areas – does it matter?

Coming to effect of urban and rural areas and their conditions on dyscalculia, the researchers reveal that previously it was found that the rural population shows more instances of the disorder than the urban areas. They attributed this to the fact that urban areas are enriched with resources that offer study support. People lay stress on mathematical excellence and so provide optimal learning environment. However, several researchers refute this claim stating that more deep and extensive collection of data is required to establish the fact.

Some studies do have found that there can be difference in rate of prevalence of mathematics disability in urban areas (1.49%) and rural ones (1.57%), (according to Nojabaee S, Arab J Bus Manag 3(5):50–59, 2014) referred at Science Daily, but level of dyscalculia in a person or child from rural and urban area shows no significant difference.

Role of gender in dyscalculia

Dyscalculia is not restricted to difficulty in calculations. It also encompasses mathematical abilities such as measurements, orientations, learning formulae and so on. To find the impact of gender, researchers gave similar tests of mathematical problems to test groups belonging to both genders. It has shown different results depending upon the areas of the world they belong to.

Actually, in almost all parts of the world, girl education has been a matter of debate. Parents not giving proper resources to girl to study, and conditioning their minds to believe that they are not meant for clerical or office works, has contributed largely to mathematical calculation disability in girls, some researchers suggest.

Statistics collected by researchers suggest that prevalence of dyscalculia in men and women was in ratio of 4:1. In school going children, however, there was no difference in the prevalence. So, it is supposed to be largely dependent on how education is provided to both genders, and is mostly a developmental dyscalculia. (Source: 7th International Conference on University Learning and Teaching book)

Pre-birth conditions – do they matter?

Dyscalculia is established beyond doubt, at least on this premise, that it is a permanent disability of brain to make mathematical calculations of any sort. Since the focus of question is a body organ, many researchers hint at the possibility of it being related to pre-birth and at-birth conditions that largely influence the development process of organs. Can a semi-developed brain be the behind this problem?

To get the correct state of dyscalculia in the world, it is very important to be able to differentiate it from various other terms such as mathematical impairment, learned difficulties and slow learning. Also, since most of the symptoms of dyscalculia are similar to dyslexia, it stays hidden and unattended because of inability or lack of time faced by evaluators to differentiate between the two. Since none of the researches are able to attribute beyond doubt any factor as direct cause of dyscalculia, it is safe to say that deeper and extensive research is required to draw the real picture.