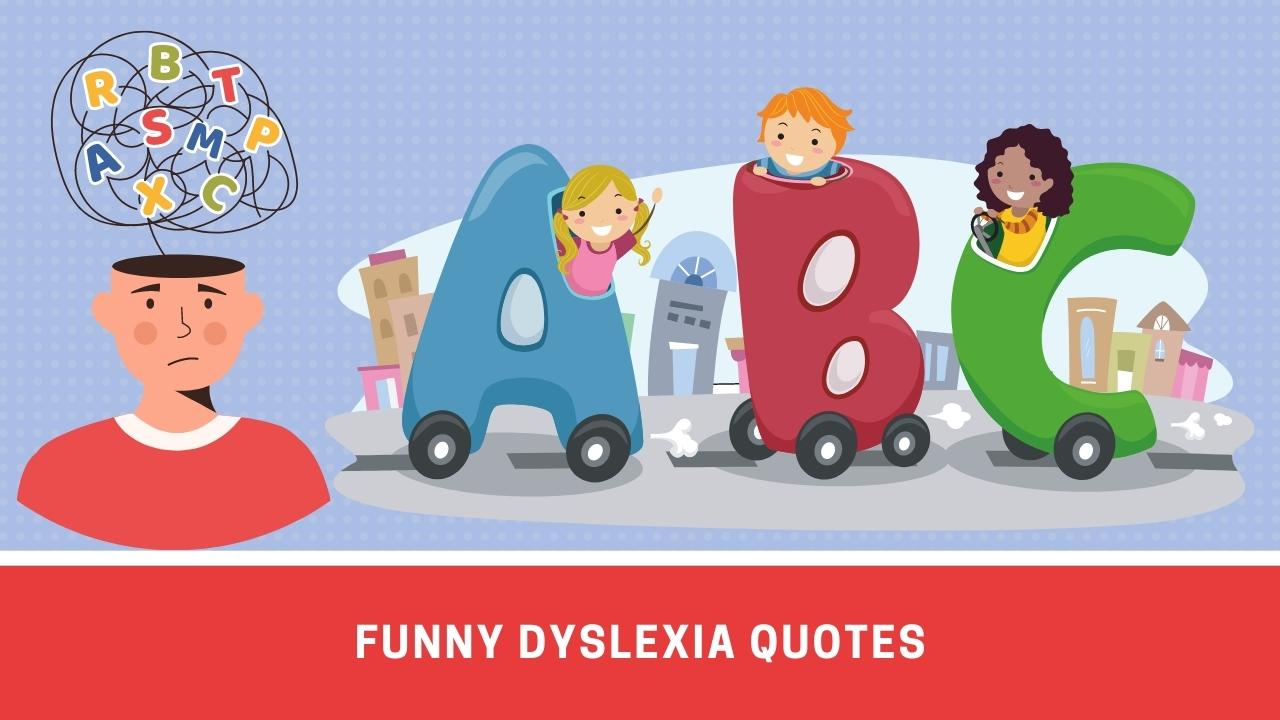 Life with learning compromise may not be the same for everyone. While the end goal is to manage shortcomings for efficiency, individuals may take varying time periods for this. To gain confidence to do better, evidently, quotes can be a good choice.

But, ensuring fun factor in them may make it further engaging and worth reading repetitively for added encouragement. With that view, we here brought to you a list of 30 quotes that you or your young ones may be excited and motivated to go through.

While it is a known fact that quotes add up to the zeal and vigour of an individual by motivating them and encouraging them. While some quotes might be about encouraging students about education and schooling; others can be related to subjects like Math and English.

But while there can be quotes about dyslexia that can be inspiring and moving, what significance can funny quotes have on this learning disability?

While dyslexia is a learning compromise that is dealt with with utmost sensitivity throughout the world, a few funny and humorous quotes can highlight the various issues faced by individuals with this compromise in a comical and light-hearted manner.

The quotes in no way offend or affront the learning disability, but creating light humor around this compromise helps people with dyslexia relate to them in a chucklesome manner and makes them realize that it is just not them who are facing these challenges related to learning, education and much more; but there are people all around the world.

Moreover, these funny quotes also boost the morale of these individuals and help them learn from the experiences and wise words of people who are suffering from dyslexia, yet have achieved large milestones in their life.

Some funny quotes to cheer up dyslexic individuals

2. “The biggest problem with dyslexic child is not the perceptual problem, it is their perception of themselves. That was my biggest problem”. – Bruce Jenner

3. “I don’t suffer from dyslexia, I live with it and work with it. I suffer from the ignorance of people who think they know what I can and cannot do.” –Erica Cook

4. “I struggle with reading a bit. I’m slightly dyslexic, so reading takes me quite a while, and in general, I’m not a big book reader at all. And something like ‘Game of Thrones’ seems very daunting to me!” -Thomas Brodie-Sangster

5. “I’m kind of emotionally dyslexic, and when I feel vulnerable or nervous, I laugh.” – Whitney Cummings.

6. “I’m dyslexic, and it takes me longer to memorize and to embody the character so I can really own it. “- Octavia Spencer

7. “I was dyslexic, so math and formulas were not necessarily my strong suit.”- James Van Der Beek

8. “My greatest gift in life was being dyslexic. It made me special. It made me different. If I had not been dyslexic, I wouldn’t have needed sports.” – Caitlyn Jenner

9. “I think that maybe growing up and being dyslexic early on, the visual quality of cookbooks specifically was something very enticing to me.” –Zac Posen

10. “I like to call myself numerically dyslexic, but officially, I am mathematically thick.” – Dominic Holland

11. “Both my sons are dyslexic, and so, too, in a much milder form, is one of my daughters” –Theo Paphitis

12. “I was dyslexic – still am dyslexic – and as child, I found things very difficult. I think my father realised that in acting and stuff I could express myself.”- Charley Boorman

14. “When I was at school you never heard the word ‘ADHD.’ We didn’t even hear ‘dyslexic’ at school. There was really nothing on offer. It wasn’t on the planet as far as we were concerned.”- Shaun Ryder

15. “Dyslexia is the affliction of a frozen genius.” – Stephen Richards

16, “My coping mechanism with my dyslexia is to use wit and humor.” – Max Brooks

17. “Dyslexia, for me, is rather like being a six-fingered typist on LSD!” – Stephen Richards

18. “They laugh at me because I’m different; I laugh at them because they’re all the same.” – Kurt Cobain

20. “I used comedy as a way to combat my dyslexia. I was barely getting by scholastically, so I used a lot of humor.” – Joel McHale

21. “An incredibly high percentage of successful entrepreneurs are dyslexic. That’s one of the little-known facts.” – Malcolm Gladwell

24. “If you are dyslexic, your eyes work fine, your brain works fine, but there is a little short circuit in the wire that goes between the eye and the brain.”-Bruce jenner

25. “I was dyslexic before anybody knew what dyslexia was. I was called ‘slow’. It’s an awful feeling to think of yourself as ‘slow’ – it’s horrible.” –Robert benton

26. “I was dyslexic, I had no understanding of schoolwork whatsoever. I certainly would have failed IQ tests. And it was one of the reasons I left school when I was 15 years old. And if I – if I’m not interested in something, I don’t grasp it.” – Richard Brandson

28.“ Getting hit by a words full of truck would be dyslexic.”- Joel Zimmerman

29. “I was very active but I was dyslexic and had a really hard time at school.” –Ashley Scott

30. “I’m Dyslexic, that just means I’m more clever and creative than you!” – Anonymous

These quotations may be used to motivate dyslexic individuals anytime and for all age groups. While the central point is to make them perceive what it is to be dyslexic, it may also be crucial to make them versed that they are equally competing to achieve in life. Inspiration may be an eminent way to help them realise their potential to kick start their goals. These funny quotes may also bring a positive and light-hearted feeling to recreate them.

READ :   Self-Esteem and Confidence Boosting Games and Activities for Students