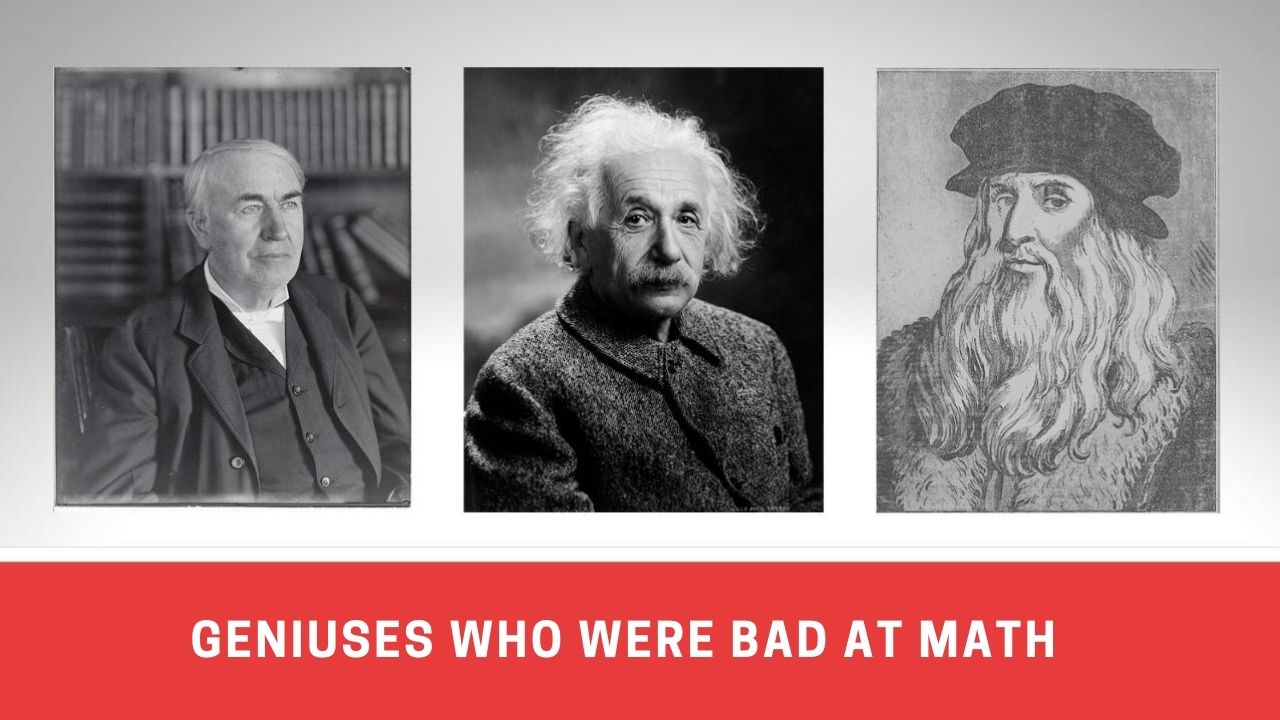 The intellect of an individual and mastering math is often perceived to be linked, but the connection is not clear. Many people who excel in their workplace or fields often have gaps in numbers. These people can be good examples to show that math may not result in the geniusness of a person.

To strengthen this belief, we here listed out a few names who faced challenges in math but succeeded in providing value to the community. Traverse through these names to empower your thoughts, breaking the links between poor math abilities and being successful.

List of famous geniuses who were bad in math

Mastering in Math or any other subject is not just about intelligence but also about practice and management. People may perceive that being intelligent makes a person master math too. This may not be the case with everyone. While some managed to learn it in an alternative or personalized way, some chose alternative fields.

Here are some people we listed out for you to let you motivated with their achievements:

Albert Einstein is one of the eminent scientists whose theories like spatial relativity still have significance.  His “Theory of Relativity” & “Energy Mass Relationship Equation” has changed the way we look at the science. While Einstein was a brilliant physicist, his math skills were substandard. His teacher believed that he was “too stupid to learn mathematics.”

They eventually switched him over to learning literature and science, which turned out for the better. Struggling through math in childhood, Einstein employed some personalized strategies, through which he came up with some solutions to manage to prove his theories.

Thomas Edison is well known for his invention of the incandescent light bulb and moving the camera. He was also one of the successful entrepreneurs of his time. Nonetheless, he was not too interested in higher mathematics.

Edison often complained that Math was more of a distaste to him, but he needed this subject for a lot of work that he did. He accepted that he was poor in math. For this reason, he used to hire mathematicians for his research instead. Edison believed that he can hire mathematicians but they can’t hire him.

Hence, Edison is a great example to teach the youth to focus on their strengths, which can help them pave their way to success.

Today the world is connected over one call away. Nevertheless, the credit for inventing the telephone goes to Alexander Graham Bell. With some other crucial services, he was a well-known inventor in history.

Bell did not enjoy math as a subject. He used to feel it arduous to find solutions for the final answer even after learning the method. In his biography, he states how he enjoyed the intellectual Exercise of this subject but was “bored and hence careless in working out the final answer once he learned the method.

Da Vinci was a great artist, scientist, and inventor. He was the first person to apply scientific methods in arts and music to make them precise. Da Vinci could master drawing when he linked these arts with math. While he was not good at either of these, combining them gave him a solution.

Here is a good example of his works: Having studied the Pacioli, he designed windows that were proportionate. Also, he opted for golden ratios to make his arts better. But having a grip on multiple concepts, he managed to bring different elements and answer math queries in a unique way.

Stephan Wolfram is the person behind Apple’s famous virtual assistant “Siri”. He developed the answer engine when working in a private company known as Wolfram Research. At the age of 15, he published his first scientific paper in particle physics.

E.O. Wilson was an America-based biologist. He was well known for his authority in concepts related to ants. E.O. Wilson published dozens of bestsellers on evolution, biology, philosophy, and conservation.

Wilson admitted that “ I didn’t take algebra until my freshman year at the University of Alabama … I finally got around to calculus as a 32-year-old tenured professor at Harvard, where I sat uncomfortably in classes with undergraduate students only a bit more than half my age. A couple of them were students in a course on evolutionary biology I was teaching. I swallowed my pride and learned calculus.” He also believes that good science is not equal to good math. He explained his view in his article published in The Wall Street Journal.

Darwin is one of the eminent biological researchers who is known for his valuable services and the theory of evolution. He was slower in math. We can discern this from this biography, where he says, “I Attempted mathematics, but I got on very slowly”. He also stated, “The work was repugnant to me chiefly from my not being able to see any meaning in the early steps in algebra.”

He once dismissed complex math arguments and wrote to a friend, “I have no faith in anything short of actual measurement and the Rule of Three.” Despite being not interested in Math, he has contributed a lot to statistics.

The journey of Faraday is really inspirational. From being a son of a poor blacksmith, he went all the way to building electric motors, generators, refrigerators, and balloons. His service was also known in the fields of electromagnetism.

Despite so many achievements, math was always a problem for him. When he came up with the idea of electromagnetic radiation, he couldn’t explain it due to poor math knowledge, and his friends ignored it at that moment. This idea was later proved by mathematicians.

Winkler is a well-known author and actor who is known for his series like ‘Happy Days’. He’s the writer for books like the Hank Zipzer series. He struggled in his school days being not aware of his learning and math disabilities.

READ :   7 Famous Chefs Who Once Struggled With Dyslexia

He had problems solving math right from the early days. With problems in comprehending texts from books and arduous subjects, he faced a few constraints but was not aware of what the condition actually was. He opened up about his undiagnosed learning problems in an interview with Today; he stated that his son was diagnosed with Dyslexia, and the symptoms that the doctor stated were similar to what he faced in his childhood.

Horner is one of the most successful paleontologists and advisors for films today. He is well known for movies like the Jurassic Park series and the Jurassic World raptor series. His interest in the eggs of dinosaurs made him dig deeper and research more about them.

He had challenges in math and felt it was unfair when others perceived him to be unintelligent. He once said that he still faces challenges with learning problems.

In an interview with Live Science, he spoke about his school journey and issues due to learning disabilities. He said, “Growing up was just terrible because everybody thinks you’re stupid and lazy. It’s funny that they didn’t understand that a long time ago. And they still don’t. There’s still a disconnect between kids who have learning problems and people who do not understand them.”

Math is not handy for everyone, but a few people may take additional time to grasp it. While some of these may come up with personalized strategies, others may turn proficient in some other fields. Accordingly, it can be rejuvenating and motivating to read about individuals who turned eminent with preliminary math glitches. These individuals may be proof that aversion to math is not permanent and may not be the stumbling block to success. With that view, we listed out some names for you to read through.