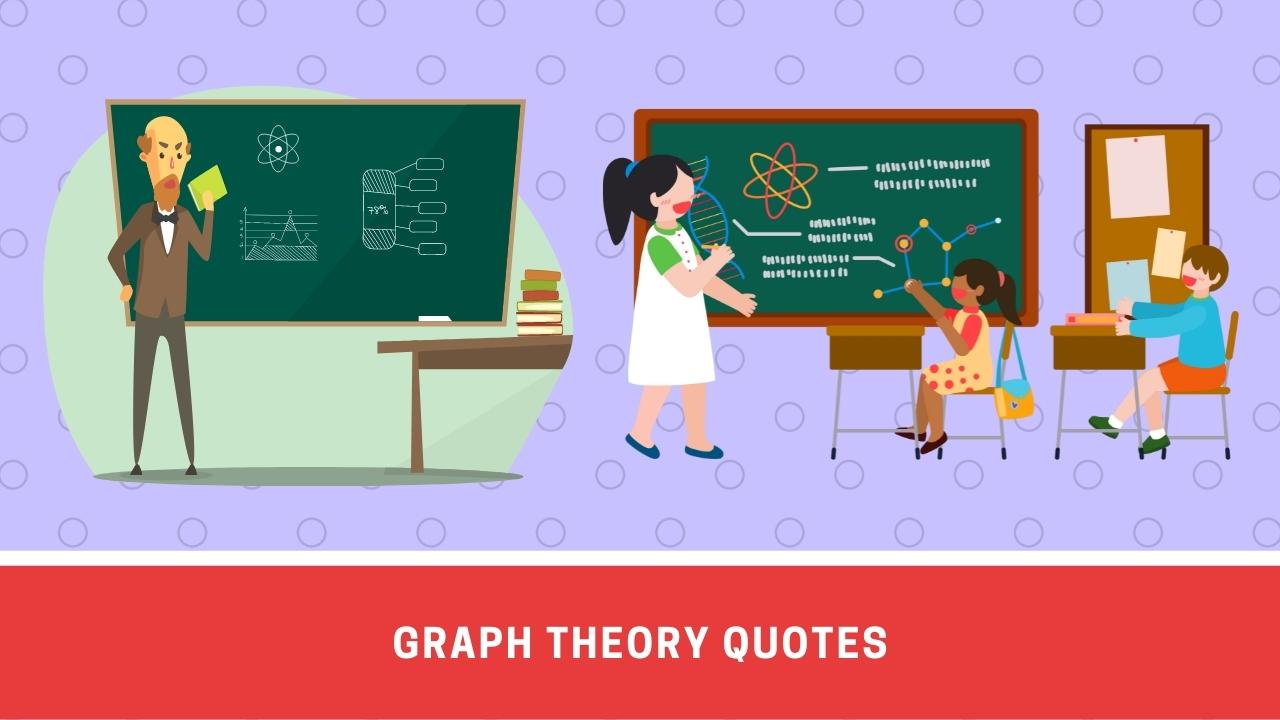 What is one of the most interesting ways to depict or compare data? It is the graph. Graphs catch our attention immediately and convey a lot of information in a clear and compact form. So let us try to gain an insight into what graph theory is all about.

Graph theory is a mathematical concept that describes the relationships between objects in a network. The field of graph theory grew out of mathematical problems in abstract algebra, topology, and combinations. Graphs are used in many areas of mathematics, computer science, and engineering. In addition, they can be used to model many real-life situations, including social and communication networks.

Through this post, let us explore a few famous quotes about graph theory. Quotations provide a better way of saying things. They give one more concise, memorable words for an idea and therefore can create an interest in the topic. It also helps to support ideas and fuel curiosity. .

1.  A graph is worth a thousand words. – Harary

2.  All paths are not equal; if they were, they wouldn’t be paths but rather the points at each end. – H.E. Huntley

3.  Graphs stand or fall by their choice of nodes and edges. – Watts & Strogatz

4.  If a graph is too large to be drawn on paper in an informative way, then it contains too much information to be useful in anything except in an abstract sense. – Kary Mullis

6. Graph theory was written to fill the need for a classroom text that would help students understand the fundamentals of graph theory while presenting a wealth of applications woven throughout the book. -Scheinerman

7. Mankind invented a system to cope with the fact that we are so intrinsically lousy at manipulating numbers. It’s called the graph.–  Charlie Munger

8. The origins of graph theory are humble, even frivolous. – Norman L. Biggs

9. The important graphs are the ones where some things are not connected to some other things. When the unenlightened ones try to be profound, they draw endless verbal comparisons between this topic, and that topic, which is like this, which is like that; until their graph is fully connected and also totally useless.- Eliezer Yudkowsky

10. At the other end of the spectrum is, for example, graph theory, where the basic object, a graph, can be immediately comprehended. One will not get anywhere in graph theory by sitting in an armchair and trying to understand graphs better. Neither is it particularly necessary to read much of the literature before tackling a problem: it is of course helpful to be aware of some of the most important techniques, but the interesting problems tend to be open precisely because the established techniques cannot easily be applied.– Timothy Gowers

11. The painting is always conceived as the linear record of a rhythmic gesture: it is a graph of a dance executed by the hand. Not only do the artist’s eye and hand perform this dance, but so does the eye of the beholder- Roger Fry

13. In fact, if you look at the root word of phonograph it just means phonetics of graphology, phono-graph, writing with sound, so graphology. You know graffiti, same root word.- DJ Spooky

14. There is magic in graphs. The proﬁle of a curve reveals in a ﬂash a whole situation — the life history of an epidemic, a panic, or an era of prosperity. The curve informs the mind, awakens the imagination, convinces.– Henry D. Hubbard

15. Above all else, show the data.– Edward Tufte

16. Topology is precisely the mathematical discipline that allows the passage from local to global. – Rene Thom

17. Dad loved computer games, and I would sit beside him for hours with graph paper, drawing out plans to try and forecast the moves he should make while he worked the computer controller. – Rhianna Pratchett

18. “We cannot just look at a country by looking at charts, graphs, and modeling the economy. Behind the numbers there are people.- Christine Lagarde

19. About 85 percent of my “thinking” time was spent getting into a position to think, make a decision, to learn something I needed to know. Much more time went into finding or obtaining information than into digesting it. Hours went into the plotting of graphs. When the graphs were finished, the relations were obvious at once, but the plotting had to be done in order to make them so.-  J. C. R. Licklider

20. In my perception, the world wasn’t a graph or formula, or an equation. It was a story.- Cheryl Strayed

Graph theory: Some fun ways to teach this complex theory

Graph theory is the study of graphs and their properties. It’s often used in computer science to find optimal solutions for problems involving networks or large amounts of information. Let us explore some fun ways to teach graph theory.

1. Have a treasure hunt

Students will be able to practice their graph theory skills by solving problems that are related to the school building, such as: “What is the shortest path between two points in our school?” or “What is the smallest number of steps needed to get from one classroom door to another?”

The Treasure Hunt activity involves finding a treasure map with clues that lead students through the building and into classrooms. They have fun trying to find hidden objects based on what they learn about graphs as they go along—for example, if there’s an apple on your desk (the apple represents one point), then maybe there will be another apple somewhere else in the room (another point). It’s helpful if someone else gives hints along the way so everyone can follow along at once.

Drive around town and have the children note down intersections that vertices might represent. In graph theory, vertices are the points of a graph. Intersections are places where two or more edges meet. In this case, it is the intersection of roads or traffic signals. The children make a note of the number of crossroads they can observe.  This will give them the idea of vertices and connections present in a network.

Have the kids plan a walk around your school building using graph theory to find the best path to their destination. Let’s say your school is located in a neighborhood with a lot of trees. The kids would have to find the shortest and the longest path: This method involves finding all possible paths connecting two points and then comparing them to determine which one is longer. For example, if you wanted to find out which route was longest at an elementary school (for example), it would be helpful for you as an adult who knows about these things but might not understand why it matters so much for children.

To begin, you will need to find a map of your city. On this map, draw every road that exists in the city. For example: if there are 100 roads in your city and 12 of them are highways, then draw 12 edges between intersections representing those highways. Next, consider drawing a graph of all the roads in your state (or country if applicable). You can start by drawing an edge between any two intersections on this graph if they both have at least one highway connecting them, but don’t forget that some intersections might have no highways connecting them!

Finally, think about how many drivers use each highway. How many people live near each intersection? What value should we assign for having too much traffic on one particular road segment? Or too little traffic on another?

These activities help the children understand the concept of axis, vertices, and nodes. It helps them identify the intersection points and can relate to them while plotting graphs. Activities also go on to show the children how mathematical concepts are not purely academic but have practical applications in our daily lives.

Graph theory is a branch of mathematics that deals with the study of graphs. It has many practical applications, including in computer science, engineering, and biology. Graphs are used to model networks and social structures such as family trees, friendship groups, and other relationships between people or things. Graph theory is a part of our everyday life in ways we don’t even notice. Graph theory makes understanding data easy.  The above-mentioned quotes and activities might serve as inspiration for ways to teach graph theory in the classroom or at home.