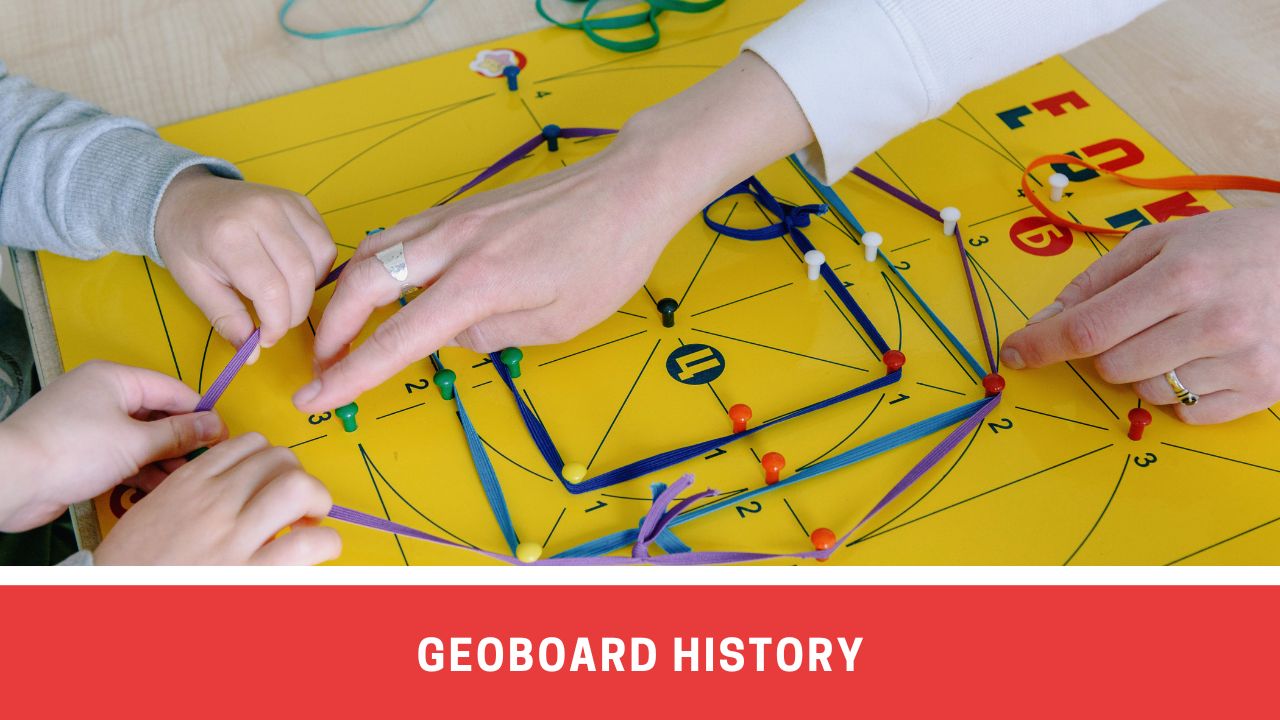 Dive into history, and you will find that educators across the globe have been using different types of manipulatives for decades to help students comprehend mathematical concepts. This is especially true for young learners. The first physical math manipulative was invented in the late 1800s. As people started appreciating the positive outcomes of using manipulatives for classroom instruction, they became an important part of an educator’s arsenal.

The National Council of Teachers of Mathematics (NCTM) also attests to the effectiveness of manipulatives and recommends using them to teach math to students of all grade levels. Common manipulatives used for math education are Cuisenaire rods, pattern blocks, tangrams, base ten blocks, geoboards, and more.

In this write-up, we will be talking about the history of one of the simplest yet effective math manipulatives, and that is – a geoboard.

What is a Geoboard?

A geoboard is a physical manipulative used to teach basic geometrical concepts. Conventionally, a geoboard is a block of plywood with nails/ pegs uniformly pounded onto it. Another element that goes along with a geoboard is rubber bands. Students can use rubber bands to make practically any shape on the board by simply stretching them between nails/ pegs.

Nowadays, you can even find plastic geoboards. These have gained significant popularity because they are easier to handle due to their lightweight, as compared to a heavy block of plywood, and are sturdy enough to withstand rough use.

A geoboard finds its utility in a broad range of mathematical topics such as basic shapes, counting, symmetry, patterns, area, perimeter, congruence, angles, rotation, etc. Students across all grade levels can use a geoboard as it beautifully complements every learner’s competency level.

Who invented the Geoboard?

A geoboard is the brainchild of Caleb Gattegno, one of the most influential mathematics educators of the 20th century. He was an inventor, a mathematician, a psychologist, and an Egyptian educator. His contribution to the field of education is immense as he showed the world how math, reading, and foreign languages can be learned and taught using innovative approaches to study.

That is a quote by Caleb Gattegno. It clearly reflects his thought process about teaching and learning. His approach was more towards letting learners explore and learn new things on their own rather than spoon-feeding them with the knowledge they would simply memorize.

His self-exploring and self-learning approach probably stems from his childhood experiences. Being born into a large family in Alexandria, Egypt, his family did not have enough resources to support education. He started working at a young age to support his family. But the future mathematician in him pushed him towards self-study when he was around 14 years old. At the age of 20, he obtained a teaching license by appearing in external examinations. He taught students at various prestigious universities after his move to England.

Caleb Gattegno’s pedagogical approach is unique and is based on his observations on how humans learn in different situations. He believed that it is easier for humans to retain information or knowledge when it is seen, heard, or felt. Information collected by our senses remains in our minds longer without us having to put in a lot of effort to remember it.

READ :   Dealing With Fractions While Having Dyscalculia

Since he proposed that education should not rely on memorization and believed more in self-learning, he advocated the use of manipulatives such as Cuisenaire rods and geoboards (which he invented), which encourage learners to do things on their own and develop a memory that retains for a long time.

How did Caleb Gattegno come up with the idea of geoboards?

By now, you must have understood how differently Caleb Gattegno thought about the learning process. Out of his many contributions to the field of education, one of them is a geoboard. But how did this fine Egyptian mathematician come up with the concept of geoboard?

Well, while going through “The Gattegno Effect[1],” we came to know that there was a time when Caleb was admitted to a hospital. Lying on his back on a hospital bed, he spent his time staring at the ceiling tiles, which led him to visualize different geometrical shapes on the ceiling. This prompted him to invent a geoboard. He placed nails/ pegs equidistant to each other to form a grid on the board similar to ceiling tiles and called it a geoboard.

He also came up with ideas on how this tool can be used by educators and students to comprehend math concepts.

How long have geoboards been in use?

Caleb invented, introduced, and popularized geoboards during the 1950s. That means this tool has been around us for more than 70 years.

Its use in classrooms picked up pace when the inventor published an article on geoboards. Fast forward to 1970, geoboards had found their way into the United States and have since then been used by educators for supporting elementary and middle school learning.

Initially, a geoboard was designed to teach primary geometrical concepts to students in school classrooms. As time passed, more ways of using it were developed, which could help in teaching and solving complex math concepts.

Educators around the globe have been using geoboards for many decades. They are relevant even in today’s modern classrooms. Teachers still love this tool, as their students can learn while having some fun. They can test and confirm their understanding by using a geoboard to solve their problems.

Digitization has changed how the world works. It has also changed how the world learns. Now we find online tools for almost everything, including online geoboard games and apps. These virtual tools are great for “anywhere” learning and do not require the use of a physical board and rubber bands. How convenient is that!

The contribution of Caleb Gattegno in the field of education will always be appreciated and admired. His inventions, like the geoboard, will continue to provide ultimate hands-on experience to students for years to come.

If you haven’t introduced this fun educational tool to your students yet – Now is the time. It will add to their knowledge and enhance their skills to deal with more complex mathematical challenges in the future.