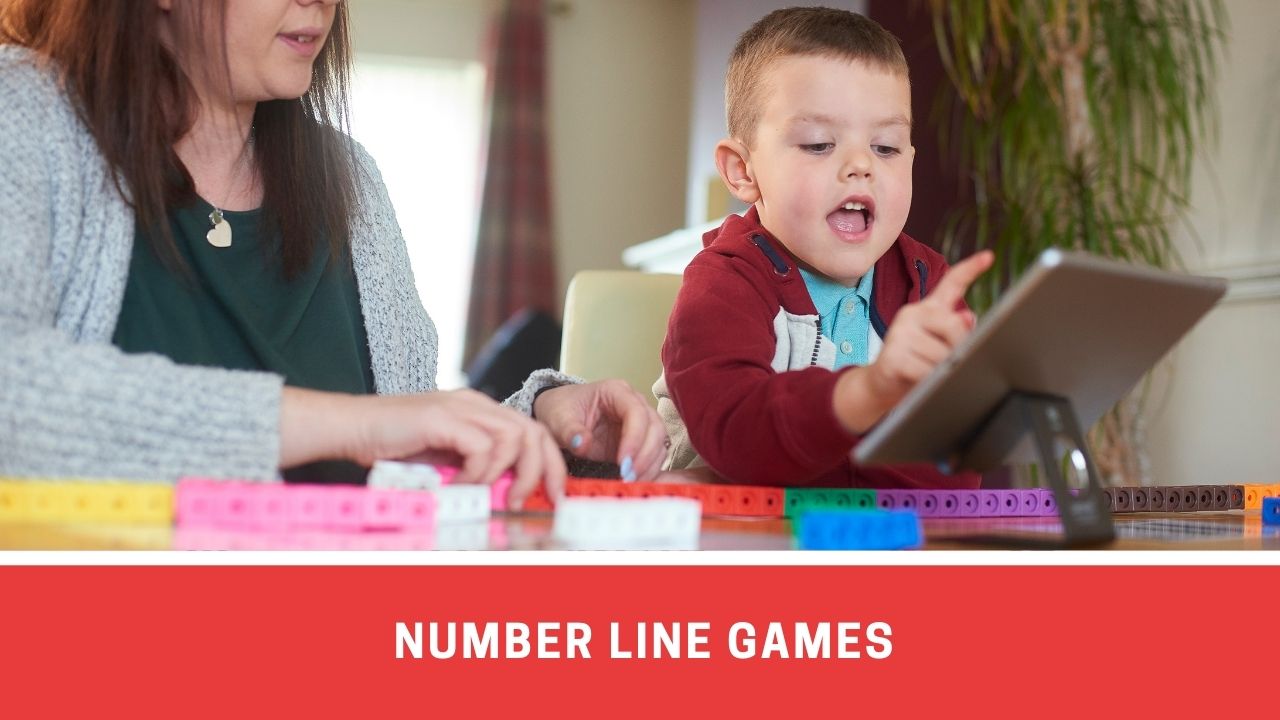 We always supported the concept of adopting a new learning process in case of learning disorders such as dyslexia and dyscalculia. Focus should be on concretizing the basic concepts in mind first. It will be a building block for understanding arithmetic in later years. Even if that means starting from level zero. It will gradually pick up the pace as you progress.

Number Line is one such topic highly required to be well versed in order to understand concepts derived from it later. Children with dyscalculia usually have trouble decoding patterns, and understanding arithmetic. The effect is also pronounced in understanding number lines as well. Hence, reconstructing the image of the number line is important. Early adaptation to the topic with good practice is the only solution to the issue. Special educators know its importance as well.

This post has been developed keeping in mind the little learners who struggle with this topic. One thing that always works out well when dealing with issues in math i.e. mixing it with fun. There are numerous ways of turning maths into a fun learning subject. One such is to present it to the kids in a form that they like the most.

Yes, you guessed it right! GAMES. May it be indoor, outdoor, board, or mobile games. Kids learn while playing. They develop analytical, strategical, and spatial skills while doing it. Here is a curated list of 7 free games for learning the number line concept in 2022.

As a diver, your aim is to get as many pearls as possible from deep underwater. To get it, you have to dive among shipwrecks and sunken ruins navigating the number line. On landing at the right number as given in the task, you will be rewarded with a pearl. Be careful with the electric eel passing by. You only have 3 lives to carry the level.

NumberLine by MLC is not essentially a game, but an app that makes the number line concept really interactive. Number line system is best understood through visualization and this app serves exactly that. You can choose number lines with whole numbers, fractions, decimals, or negative numbers labeling.

A number of activities can be performed on this with drawing and annotation tools. You have to figure out how many jumps between two points, how to manipulate forward and backward jumps, add equations, expressions, and descriptions with writing tools, and many more.

As the name suggests, the theme is to rescue the drowning swimmer. Use the number line to find the position of the swimmer. After getting the position, drag the counters onto the HTU place value chart to make that number. Hit ‘go’ to let the boat come for the rescue. You can level up by changing between different number lines.

Rikudo is a logic puzzle game that covers a wide range of topics of the subject. Although, not directly but it does test the understanding of numbers and series.  The goal is to find a path of consecutive numbers in a honeycomb grid with hexagonal cells. Each puzzle is a number maze with a unique solution.

The game is really engaging that keeps the learners busy for hours. The level gets harder as you progress through the game. Developed by Rikudo Games, Number Mazes is currently sitting at over 1 million installs with 4.6-star ratings on the play store.

Number Ninjas is a mission-based platform game. When other numbers fail to complete the adventure, its the rise-and-shine time of ‘number 1’ to save the day. The number turned ninja has to pass through several obstacles to reach the end goal.

The game is really interactive and able to hook the kids for hours. Though not directly teaching the number line. However, playing it, kids will become more familiar with different numbers on the line. UI is really suiting the theme of the game. It has around 20 missions to complete. The game is developed by GiftedIntrovert and is available on Kongregate.

Its a kayak racing game where you have to solve mathematical operations in order to lead in the path. There are steps and on each step, the number line is placed with rocks on each number except one.

You can go from one step to the next by solving the addition or subtraction operation referring to the specific number at which the rock is not placed. You have to select the equation which displays the correct operator and matches your count. If you miss, the kayak will bounce back and new equation buttons will appear. It’s available at toytheater site.

Prodigy Game is the perfect example of ‘learning while playing’. It lets you practice concepts of mathematics in an interactive way. As per the description, Prodigy delivers a unique learning experience through an interactive math game where success depends on correctly answering skill-building math questions. With recent updates, developers added several new skills for practice. The concept of number line system is also included. So you guys need to check it out. Players can earn rewards, go on quests and play with friends — all while learning new skills.

The app mainly targets kids aged up to 6-12. Its user base comprises over a million teachers and 70 million students around the world. Parents can monitor their child’s progress through the levels and understanding of the concepts. Teachers should allow students a 10-minute play in class as a reward for completing a task. This will motivate students and give them a sense of achievement.

Games can help grasp the practical implications of the concept of number line. By doing various activities included in the gameplay, the learners find engaging ways to internalize number line-based operations. The best part is the games allow the students to stay glued to the learning process even while on the move as these can easily be played on all mobile devices.