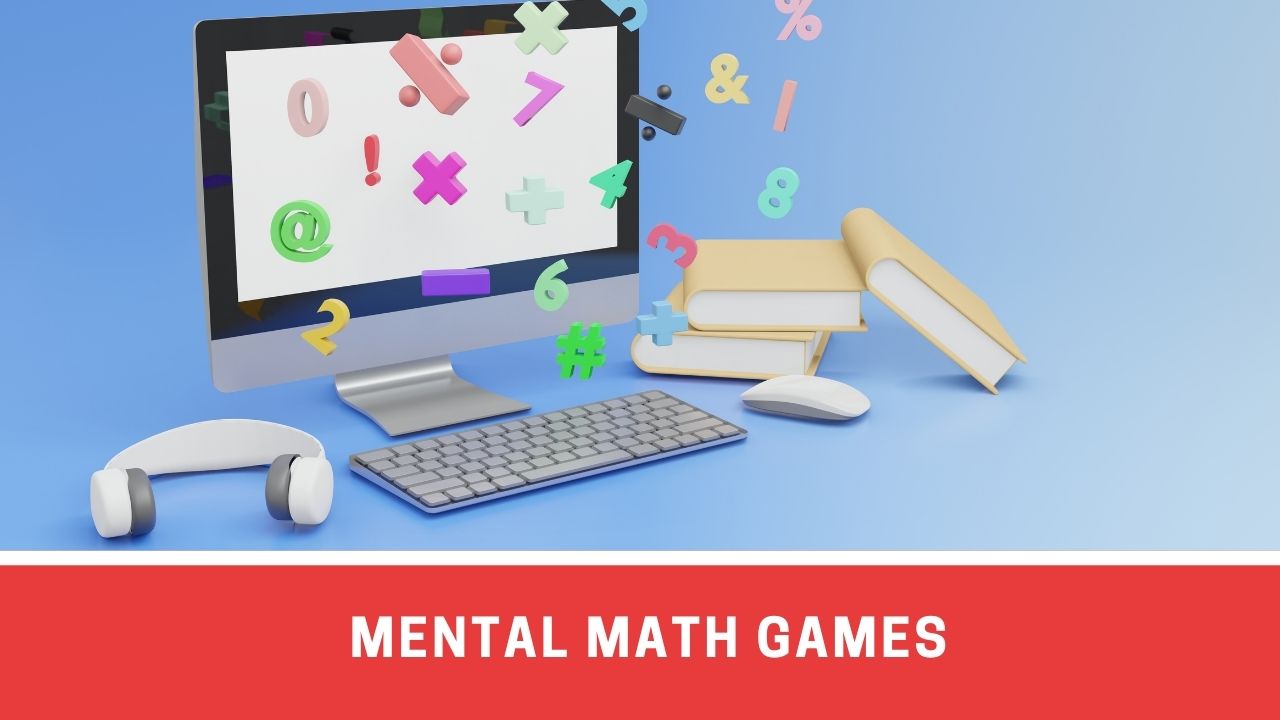 The traditional way of solving problems in maths is probably the most trusted one. However, as a child grows, so are the expectations on his/her mental math abilities. One generally assumes a linear graph of the mental math growth in a child as he/she goes into adolescence. As they move to higher classes, lesser is the time given for calculations. More arithmetic is included and calculations are less focused. In all, students are expected to display math fluency without depending on pen, paper, and calculators.

First, we got to know what do we mean by Mental Math?

We will jump right into the definition but first, answer this, what’s 3 + 3?

Almost all of you must have given the right answer and most probably within 2 seconds without even touching a pen or paper.

The real question is how?

This is because our brain is already been trained to do simple calculations like these. It has already achieved a state where we no longer required special tools to do basic arithmetic calculations. This ability to do mathematical calculations quickly and without any help is called  Mental Math.

Mental Math is our ability to do mathematical calculations in our mind without the help of any device, such as a calculator and mobile phone, etc. The more we develop mental math skills, the faster our brain will have computational power. The level of mental math depends upon the amount of practice and the environment in which we practice our mathematical skills.

All in all mental math is an important skill and you cannot ignore it. The thing is not all are good enough to do the math mentally that smoothly, especially in cases of children with a learning disability such as Dyscalculia. In such a scenario, adapting to a new learning process is a preferable strategy. If that even means starting from level 0.

This post has been developed keeping in mind the little learners who struggle in mental math. One thing that always works out well when dealing with issues in subjects like math is mixing it with fun. There are numerous ways of turning maths into a fun learning subject. One such is to present it to the kids in a form that they like the most.

Yes, you guessed it right! GAMES. May it be indoor, outdoor, board, or mobile games. Kids learn while playing. They develop analytical, strategical, and spatial skills while doing it. Keeping that in mind, we curated a list of the Top 10 best mental maths games for 2022.

Prodigy game is the perfect example of ‘learning while playing’. It lets you practice concepts of mathematics in an interactive way. As per the description, Prodigy delivers a unique learning experience through an interactive math game where success depends on correctly answering skill-building math questions. Players can earn rewards, go on quests and play with friends — all while learning new skills.

The app mainly targets kids aged up to 6-12. Its user base comprises over a million teachers and 50 million students around the world. Parents can monitor their child’s progress through the levels and understanding of the concepts. Teachers should allow students a 10-minute play in class as a reward for completing a task. This will motivate students and give them a sense of achievement.

This game is perfect for early learners developing an interest in numbers. Toonish elements in the app really make it interactive for kids in kindergarten. The developer claims the game to improve the math scores by 34% by teaching core math skills in a fun, educational, and interactive way.

The best thing about Matific is that it is curriculum-aligned, sort of like doing homework in a fun way. Topics covered include Basic counting, Addition, Subtraction, 2D Shapes, and Measurement. Recommended for kids within the age group 6-8, Matific Galaxy is the perfect educational experience, combining fun and learning. Currently, it sits on more than 10k downloads on Google Play.

Toon math is the product mix of popular endless runner genre games and math as an educational component. Players need to solve math problems while running and dodging obstacles to save their friends. The game features impressive mechanics, and the transaction from playing to solving math operations is smoothly done. The game tests the automaticity of your mental math skills. The timer on the game ensures that you put your mental maths skills to work.

Amazing graphics and intense gameplay will let your kid hooked to it for hours. Toon math is the game for almost any age group. Toon math lets you play the game at your own pace. Toon math is available on the play store and amazon app store at the moment. More than 500,000 users play this game worldwide. It is sitting at 4.5-star ratings at the android play store.

Developed by the Scholastic educational team, Sushi Monster is a fun game to test and practice your math facts fluency. Users need to solve a series of addition and multiplication problems by feeding the monster numbered plates of sushi. Players are given a series of products and sums. They need to build correct equations to feed the monster within the timeframe. The quicker they give the correct solution, the higher the score will be.

The game tests more than just mental maths fluency, players need to plan ahead, as the order in which they choose sushi plates will determine if they fully complete the level. Sushi Monster is recommended for children aged 6 and older. It is currently sitting at a 4.0-star rating at the app store. At the moment, Sushi monster has 7 addition levels, 5 multiplication levels, 4 rounds/level, and 14 target numbers/round.

Math 24 lets you practice mental math skills with numbers and operators on screen with a single goal of making it to 24. The game has stage mode and speed mode. The latter tests the automaticity level of your grip on math facts. Graphics are although minimalistic but adorn the gameplay. The best part is that it tests an individual’s strategic abilities in maths. Kids can use different operators as per their strategy to make it to the 24 number.

The space arcade game was a huge part of our childhood that we just can’t forget. We use to spend hours on those games. Rasofia games tried bringing this nostalgia with the additional ingredient of educational components i.e maths. While you’re stuck in battle, you are required to give a quick answer to the math quiz thrown at you at your turn. Campaign and versus are available to keep you busy. The game tests mental calculation ability at every turn. The AI algorithm used will ensure that the game stays challenging for you according to your pace.

Hit the Button Maths aims at improving the mental math of 5-11-year-olds. The gameplay is simple, all you have to do is to hit the correct against the asked question in a given timeframe. There are a variety of levels included, covering topics such as Time Tables, Number Bonds, Division Facts, and Square Numbers. Other than these, the four standard arithmetic operations are also covered: addition, subtraction, multiplication, and division. One good thing about this is that the questions are randomly generated. Hence, it is replayable as times as you want.

10monkeys Multiplication lets you practice your multiplication skills and become fluent at it. The theme of the game revolves around saving trapped monkeys by solving multiplication problems. The app is really engaging. The game becomes challenging as it progresses, by pace and difficulty level.

The game features 12 mini-games to offer variety in practicing tables from 2 to 12. The game is available in English, Spanish, German and Finnish. Close to a million players use this app.

Monster Math is an educational adventure platform game that improves over 70 math skills including addition, subtraction, multiplication, division, and fractions. The gameplay involves guiding the player by giving answers to math equations to kill monsters and obstacles. The best part of the game is the customizability. You can configure the level of the game according to the pace. It covers the age group of students from KG to Grade 5th. As per the description of the game:

Threes is an addicting puzzle game that tests an individual’s mathematical strategic ability. Users have to make 3’s and it multiples by swiping blocks of numbers placed on board. Numbers are added when pushed against the boundary of the board. Players have to make numbers under certain rules and conditions. As the game progresses, the steps become limited due to movement constraints. The success depends upon the player’s fore-vision in the game. Threes is a fairly popular game with close to a million people playing it at the moment.

How to use these games for better results?

Mental math games can serve as a meaningful practice tool if you have intervened in them correctly. Since the gamification poses a challenge of keeping children informed that the basic motive is learning only, a few strategic approaches are advisable:

The biggest responsibility is to ensure that kids understand that games are meant to ease learning. Hence, follow the above intervention strategies for better outcomes.

Often teachers complain about children not paying ample attention in the class. A major cause of such attitude is monotonicity in the instructions. Games help in breaking this monotony and deliver benefits such as:

Technology in teaching has opened transformed ways of imparting knowledge. Math skills development through games has been found to have a profound impact on mental calculation abilities. The immediacy in rewards (scores, and bonuses during the game) compels students to pay better attention and feel driven to excel. Thus, the very motive of teaching i.e. building skills is achieved without putting children under pressure.