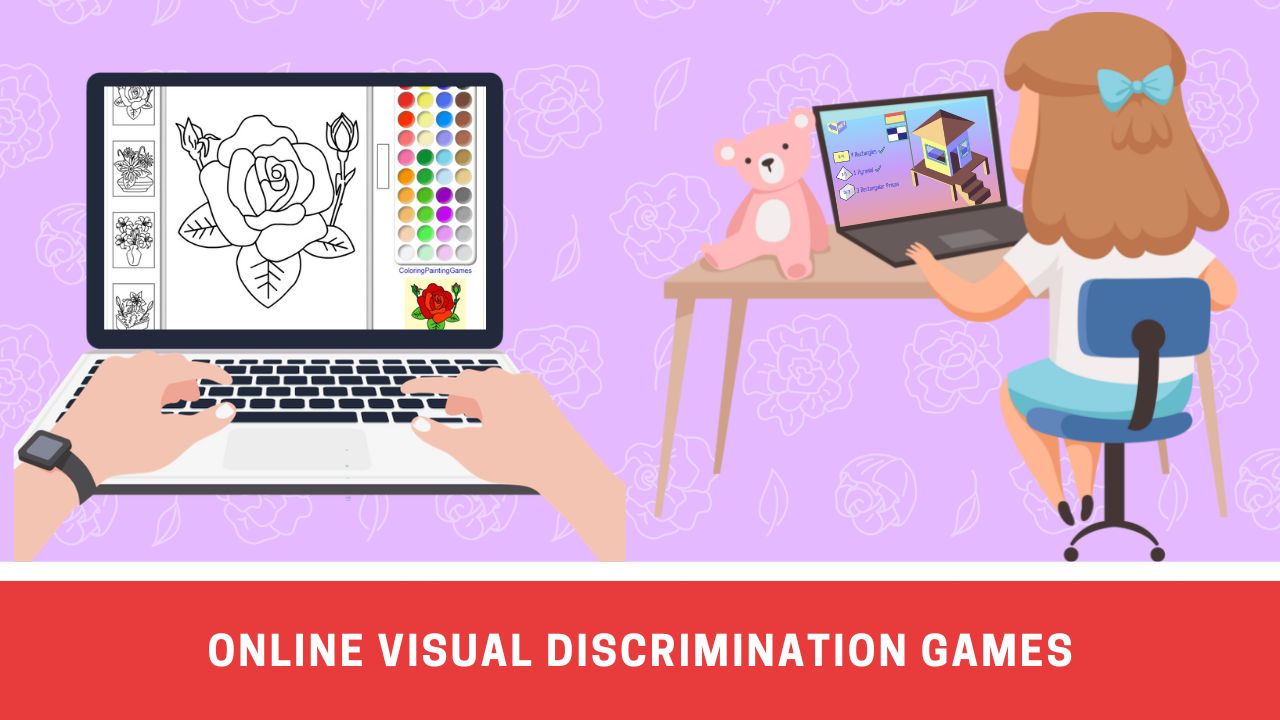 How do you know a cat is not a mouse, or a ball is not a tomato? Scientifically speaking, through sensory acquisition or visual perception of different objects. Visual discrimination[1] is an aspect of visual perception that helps us classify, organize and differentiate different shapes, sizes, and colors of various objects.

Within visual discrimination, there are several different milestones. For instance, toddlers can easily get confused between a dog and a cat. However, for kindergartners, the identification of animals is an important milestone.

So, the blog mentions several games that strengthen various facets of visual discrimination in children of different ages.

Catering to visual perception, memory, sequential understanding, and identification, below is a list of 10 visual discrimination games that can be easily accessed online.

Tetris is a game that reminds us of our childhood. Even though the game has very simple rules, it challenges the visual understanding of the user as they have to move different shapes to the floor so that complete lines cancel out.

With different colors and shapes, the user is visually stimulated and has to use his visuospatial understanding to pull them down to the floor to fill the vacated space. Several studies have been conducted to determine the impact of this game, and a special phenomenon has been uncovered, the Tetris effect. The after-effects of Tetris are pattern-based thoughts and mental images, which help individuals to identify and manipulate shapes in real life.

Memory Flip games are of several types. Based on numbers, alphabets, animals, places, and many other things, the game strengthens one memory and demands extra scrutiny. Almost all of us might have played this game as kids.

The memory flip game has simple rules. All the cards are laid out, facing downward, and the user will be allowed to flip one card, post which they have to find its match. After many flips, the user must remember the cards’ placement and find the match with as few attempts as possible. The memory flip game is one of the best ways to strengthen one’s visual discrimination skills, as it involves finding a perfect match for an item. Sometimes, the visuals are accompanied by auditory hints, which can further help recall and identify objects.

Jigsaw Puzzles are fun to complete for all ages. For younger players, however, puzzles with lesser pieces and bigger images for clarity can help with similarity identification and concentration.

As the child grows, increasing the difficulty of the jigsaw puzzle helps ensure that the child can piece it together after creating a mental image of the whole scenario or object. Jigsaw puzzles demonstrate practical situations so that identifying similarity and differences become a necessary skill to acquire. Thereby strengthening the understanding and visual perception of real-life scenarios, such as farms, ponds, or malls. Another benefit of piecing a puzzle together is that it sharpens the ability to look at finer and minute details.

Spot the difference game is another fun activity to help young people develop their visual discrimination skills. In the game, two pictures depict similar scenarios, and the player must find the differences between the two (e.g., missing objects, people, etc.).

Like the jigsaw puzzle, spotting the difference makes the vision focused and attentive to finer details, specifically dissimilarities. MaOftenese spot the different activities and games based on real-life situations like a home scene or a public place. Thus, helping young ones with necessary visual-spatial memory and the social understanding of situations.

The game usually has different shapes and colors of objects, with much more differentiation. The player has to group them into three based on sequence, pattern, or similarity. Sets, thus, are much more complex and require visual discrimination and strong logical reasoning. Hence, children of older age can benefit greatly from such a game.

The hidden pictures game is, again, a tough nut to crack. Slightly harder for young children, hidden pictures are based on the principles of visual perception, mainly figure-ground.

READ :   What is LEA in Special Education?

The player must locate the objects provided as challenges as the picture is in black-white. Additionally, the game also demands an understanding of the usage of the object, which aids in finding the object’s location. While the game is already complex, hidden pictures can also be ideal for older adults.

Illusions trick our minds into believing something that isn’t there or creates multiple images which are practically impossible to create. The game illusions present several images that defy the rules of figure-ground perception.

The game is extremely simple, and one has to answer questions about whether the illusion is real or whether one sees a certain type of image. Illusions strengthen visual perception and demand an abstract level of visual discrimination, which is more holistic than the games mentioned above.

Getting in shape is all about different shapes. It caters to the young audience, who have just learned about the variety of shapes that make the entire world around us. However, both preschoolers and middle-school children can enjoy this game.

The game proceeds with a scenario where different everyday items, animals, or structures are placed, and the user has to identify their shape. Sometimes, an object is made of two or more shapes; hence, the player has to break down the stimuli and identify its shape. Getting in shape is an efficient way to understand the sizes and characteristics of objects and even replicate them in real life.

Sorting games have been employed in real-life settings with specially-abled and normal schoolers. The game involves sorting objects based on their shapes, sizes, colors, and features.

For preschoolers, sorting objects can be based on just one characteristic as their visual discrimination ability is still developing. While for older children, sorting can involve a multi-level analysis of characteristics. The game sort is an interactive way to stimulate the sense of touch and vision when practiced in real life.

The Colouring game is a simple and light-hearted activity for young schoolers who have just started identifying objects, colors, and other things. Colouring games enhance the identification of objects in schoolers and also helps with a personal touch aiding in memory formation.

The game involves any object or animal. The player should color different parts of the object in different colors. The coloring game can also be leveled up to include scenarios and an understanding of the surrounding features. The kids can refer to the images given on the bottom-right side. After perceiving and understanding the image, they can color the picture similarly or change it as per their liking. You may choose any image from the options on the right side.

Visual discrimination: What’s in it for individuals with learning disabilities?

As such, individuals do not benefit from conventional teaching methods; involving fun games not only helps with the understanding of objects but also increases focus bandwidth. In a study[2] by Ahmed Tili et al., it was found and recommended that specially labeled learners benefit from game-based learning and targeted activities.

Besides benefiting the classroom understanding of concepts, visual discrimination is an important growth parameter. Children with a delay in visual discrimination abilities face several other issues in their life. However, with advancing technology and literature, the games mentioned above have been developed in a digitized form so that children can access these and enhance their visual perception.