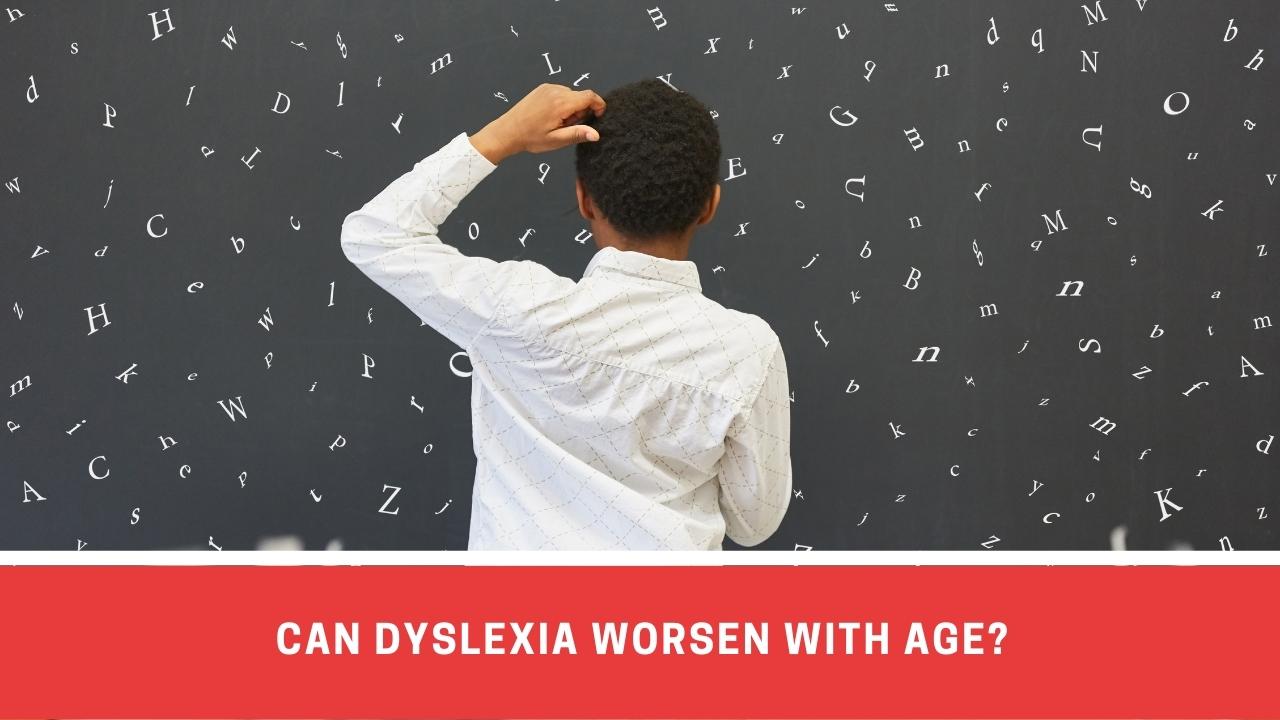 While children and parents alike try to figure out “what’s wrong”, it’s sad that they, more often than not, blame themselves for no fault of theirs.

Parents frequently wonder, “Will my child outgrow dyslexia — or would it become worse?” as they see their child struggle with dyslexia-related learning difficulties.

Children do not outgrow dyslexia, despite the fact that it has nothing to do with a child’s intelligence or desire to study.

If neglected, the problem may result in lifelong reading, spelling, and writing impairments.

In the article below, we explain the effects of untreated dyslexia on kids and also if it can mature with aging. The sections examine how specialized learning facilities assist kids in overcoming learning obstacles caused by dyslexia and prevent the disorder to bleed into adulthood.

Children with dyslexia have trouble decoding words, which causes problems with language-based learning, though everyone is affected by dyslexia differently.

For instance, some kids with undiagnosed dyslexia could outperform their peers in their early years of school by working harder than they should.

However, as kids get older, there is a greater expectation for them to read and write fluently. Students with learning difficulties are prone to lag behind academically without appropriate assistance. This is clear from the fact that these pupils continue to read below grade level and find writing to be a challenging and time-consuming task.

Children with a learning disorder may lose interest in education as they start to associate learning with difficulty. Many people have misconceptions about dyslexia, believing that its issues are caused by laziness or that a child’s learning difficulties are temporary.

However, dyslexia frequently persists until maturity.

While some individuals who have been diagnosed with dyslexia discover that their symptoms alter as they mature, other dyslexic children are not identified until they are adults.

Does dyslexia alter as we become older? Although the signs of dyslexia do tend to change with age, people do not outgrow them. Dyslexics can excel in school and their careers with the right guidance and assistance. To find out more about how dyslexia might impact people at various ages, keep reading.

Can it get worse under stress? Simply put, prenatal and early childhood stress may be a risk factor for developing dyslexia, and dyslexia itself may be the result of an adaptive reaction to stress that has been preserved throughout evolution. However, it is not a recent discovery that early hardship may contribute to reading disabilities.

If dyslexia is not addressed, would it become worse? Dyslexia can cause low self-esteem, behavioral issues, anxiety, anger, and distance from friends, parents, and teachers if left untreated. When a youngster becomes older, not being able to read and understand might keep them from realizing their potential.

Correlation between dyslexia and age

The signs of dyslexia don’t ‘grow worse’ as people age. Nevertheless, it becomes harder for kids to overcome their learning challenges the longer they go without assistance. The fact that a child’s brain plasticity declines as they get older is a major factor in this.

Children’s capacity to adjust to change is impacted by this. It takes four times as long to intervene in Primary 4 as it does in late kindergarten to help children overcome dyslexia-related problems.

Children experience higher stress as scholastic expectations increase, along with a decline in brain plasticity. Children with undiagnosed dyslexia, for instance, know 10,000 fewer words by the third grade than their classmates do. Children who feel they are falling behind their classmates may struggle with social and emotional issues including anxiety– as stated in this The Strait Times story.

Unfortunately, these issues don’t only affect students. Undiagnosed dyslexic young individuals sometimes start college or their careers at a disadvantage. Although untreated dyslexia does not worsen with age, its consequences are lifelong and have an influence on performance in a variety of settings.

Dyslexia is a brain characteristic, a cognitive style with strengths and weaknesses, and as such, it cannot be treated. When they pursue professions that play to their strengths, such as filmmaking (Steven Spielberg), writing (Philip Shultz), social cognition (Gavin Newsom), architecture, surgery, etc., many people with dyslexia are able to overcome their difficulties with reading and spelling and succeed in their professional lives.

However, despite being able to read and write, adults with learning disorders tend to detest reading and are still likely to have some degree of deficiency in written language abilities, such as a slow reading pace. The dyslexic cognitive and neural phenotype is likely to have an impact on aging, just like any other physiologic feature.

Significant research distributed in the journal Aphasiology exhibited what was clinically and naturally known: ordinary aging makes us somewhat “dyslexic.”

But how? As indicated by this review, it’s on the grounds that maturing weakens higher cerebrum working. To a limited extent, this is steady with more slow mentation and discourse handling, slips in memory and fixation, and so forth. And furthermore, in light of the fact that maturing grown-ups were found to have comparative phonetic handling troubles as do younger children with learning difficulties who were expected to have an essential cerebral debilitation.

In any case, a similarly significant connected finding was overlooked from thought. Maturing likewise makes us clumsy. Might dyslexia and klutziness, but gentle, be connected? Might the essence of this relationship additionally make sense of the instinctive maxim “Sound body, sound brain?”

As indicated by Dr Harold Levinson, the comprehension of this recently neglected relationship was vital to tackling most every one of the conundrums portraying dyslexia. Furthermore, the logical comprehension of “Sound body, sound psyche” prompted the disclosure of a new and fruitful clinical treatment for dyslexics of any age. It likewise explained the double job of the cerebellum in deciding engine working and co-deciding such higher mental capabilities as discernment and learning, memory, focus, discourse and language, feelings, tangible (e.g. phonetic) handling, and so on. Already, these last option capabilities were erroneously credited to just cerebral cerebrum processors, bringing about mistaken or fragmented dyslexia presumptions, convictions, and definitions.

A far-reaching comprehension of dyslexia and every one of its varieties, including maturing, developed more than a multi-decade research exertion. Dyslexia was perceived to be undeniably more intricate than simply a serious perusing issue described by inversions or phonetic-related hardships. As a matter of fact, this learning issue was viewed as a multi-faceted condition of perusing and non-perusing side effects including composing, spelling, math, memory, discourse, tactile engine handling, and so on

Upon point-by-point clinical assessments of dyslexics, just equilibrium and coordination or “klutzy” neurological signs and side effects symptomatic of an internal ear/cerebellar shortfall were constantly found. In like manner: Might the perusing and phonetic troubles as well as most other dyslexic side effects be of a “klutzy” or cerebellar versus an expected cerebral beginning? Might the cerebral cortex be at first typical in (non-senior) dyslexics, many having an ideal visualization? Might the cerebral cortex in this way play a crucial compensatory as opposed to a dysfunctional job, particularly since symptomatic cerebral neurological signs couldn’t be recognized?

In view of the above experiences and discoveries, the dyslexia condition was proposed by Levinson to happen when at first typical perusing and related higher mind cerebral designs neglected to process or make up for the cerebellar/inward ear decided mixed perusing and related signals got and communicated.

Critically, this idea was likewise predictable with the exploration of exceptional cerebellar neurophysiologists and inward ear specialists (neurotologists), accordingly acquiring their help. Nobel Laureate Sir John Eccles showed that the cerebellum controls signal transmissions; hence a cerebellar disappointment brings about signal-scrambling. Furthermore, Alan and Henrietta Leinert and Robert Dow, among numerous other researchers, featured the significant job of the cerebellum in co-directing higher mental working with the cerebral cortex. In this way, a cerebellar imperfection can promptly make sense of the psychological, fixation, and profound dysfunction as well as the “klutziness” describing dyslexia and related learning, consideration deficiency, and, surprisingly, phobic problems.

Cautious neuropsychological testing uncovered that most all dyslexic kids become dyslexic grown-ups and the opposite. Maturing seems to lessen cerebral and additionally interrelated cerebellar working, along these lines making sense of both dyslexic and klutzy heightening or creation.

Nonetheless, dyslexia and related problems might be obtained or escalated at whatever stage in life by any condition which:

(A) – hinders inward ear/cerebellar capability (e.g. ear and sinus conditions, mononucleosis, whiplash, maturing, and so forth), and additionally

Enhancements in dyslexia and related messes happen by compensatory systems and treatments which:

A- work on inward ear/cerebellar working thus decline related signal scrambling (e.g. internal ear improving prescriptions and activities, and so forth), and additionally

B- further develops cerebral and related descrambling abilities (e.g. mental and focus improvement, biofeedback, and so on.)

Consider getting your child’s disorder professionally diagnosed if you have any suspicions about it.

Numerous learning facilities provide the knowledge and experience necessary to assist kids in overcoming their learning obstacles. These centers use dyslexia-specific teaching strategies and resources that are not available in traditional schools, in addition to dyslexia evaluations. Although dyslexia is a barrier for many students, specialized learning facilities offer the help your child needs to overcome their obstacles and develop into a confident and capable young adult.