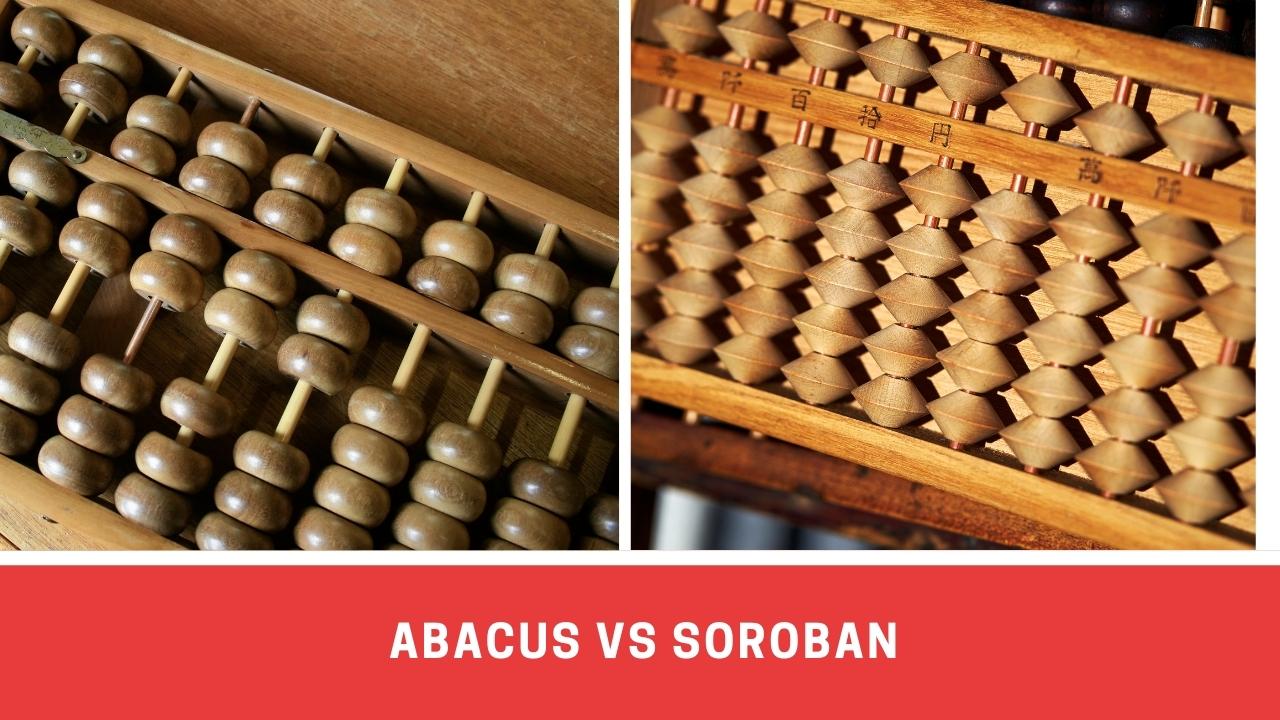 Regular academics get fascinating when distinct manipulatives are employed in pedagogies. Math is one such subject where pupils can employ estimators. Abacus is one such handy reckoner that has attained universality. In View of after-school programs, the abacus has a set of edges and catches too. Does the implementation of Soroban mitigate these?

While the traditional abacus has a Chinese origin, Soroban is merely a Japanese version derived from it. We will inculcate you with pivotal contrasting traits between Abacus and Soroban, easing you to make a stronger choice among these.

With a history of around 5000 years, Abacus has been in use by several countries. Derived from a greek work Abacon— Abacus means table, Tablet, or a flat surface. Romans and Greeks are believed to use Abacus type devices. However, historians claim that Chinese minds introduced these at around 500 B.C.Soon countries like Malaysia, Korea, Taiwan, and Japan began operating them, which gave rise to a wide variety of styles, and sizes. The base concept of beads and rods is retained in all these variants.

The World has witnessed a wide variety of Abacus as time passed. Comprehending these, in brief, can make you intelligible. Ancient Roman Hand Abacus is Probably the oldest version of the abacus; these contain seven long and short grooves. While the upper grooves have one bead, the lower ones have four beads. Later Chinese Suanpan Abacus was developed based on Hindu-Arabic mathematics in the twelfth century. These are often made with Hardwood having a length of about 20cm. It has 2 beads in the upper deck and 5 beads in the lower. Known in multiple names, Suanpan was designed to make calculations with precision.

The East Asian Schoty Abacus has been a popular reckoner in Russia for centuries. While other variants have horizontal configuration, Schotys have a vertical configuration. This model is sparsely used in basic calculations probably because it cannot stand up with other versions. Vietnamese Abacus takes a unique place by having five beads on upper and lower decks. Since only bookkeepers used it in Vietnam, it gradually lost its existence.

Soroban Abacus is a Japanese simplified category with just a 1:5 configuration.  Lee’s Improved Abacus is the latest model created by Lee Kai Chen in 1950 and is a combination of Suanpan and Soroban. It is known for its error-proof manipulation and versatility.

Abacus is being used for centuries in China; it was brought to Japan in the 16th century. Some major changes were made to it as per Japanese taste. Accordingly, Sorobon has 1 top bead and 4 bottom beads— one less than the Chinese abacus, thus making calculations smoother and easier. Soon, various Japanese merchants began to use them. Mathematicians like Seki Kiwa do extensive studies on it to make improvements. The use of these reckoners is evident in Japanese schools today, retaining their value.

The Japanese teaching style is distinct as instructors rely on organic estimators to strengthen the comprehension of Arithmetic, thus encouraging the employment of Sorobon to ameliorate calculating skills.

Looking into the layout of the Sorobon, the upper bead has a value of 5 (Go-Dama), and each of the lower beads has a value of one. A dot is marked on every third row indicating a whole number completed; These may vary in size from 13 to 31rods.

The abacus has various benefits like enhanced concentration, personality development, faster calculations, and improved motor skills. Despite these gains and popularity in Japan conventionally, Soroban has a set of utilities that can make it a pre-eminent choice for you.

Soroban or Abacus- How to adopt one?

While there are multiple options of abacus available, it can be taxing to decide which one to choose from. Anyone among them can be taken in as the essence behind them is ultimately the one and the same. However, you can explore the following factors to boost up your decision process:

Comprehending the significance of the Abacus, many schools started to enact these reckoners in academics. Their level of acceptance can be sensed from the online classes offered. The choice between Abacus and a Soroban is often debatable. All the details assembled above may let us go around picking up Soroban. Apart from being a most used model, various other factors can bring us to these inferences. However, the choice is ultimately in the hands of the aspirants.

If you find this post helpful, then please help us spread the word. Share the post with your friends, family, and colleagues. Do not forget to subscribe to our updates. Any suggestions and recommendations are appreciated. You can reach us through the contact form and we will get back to you shortly.