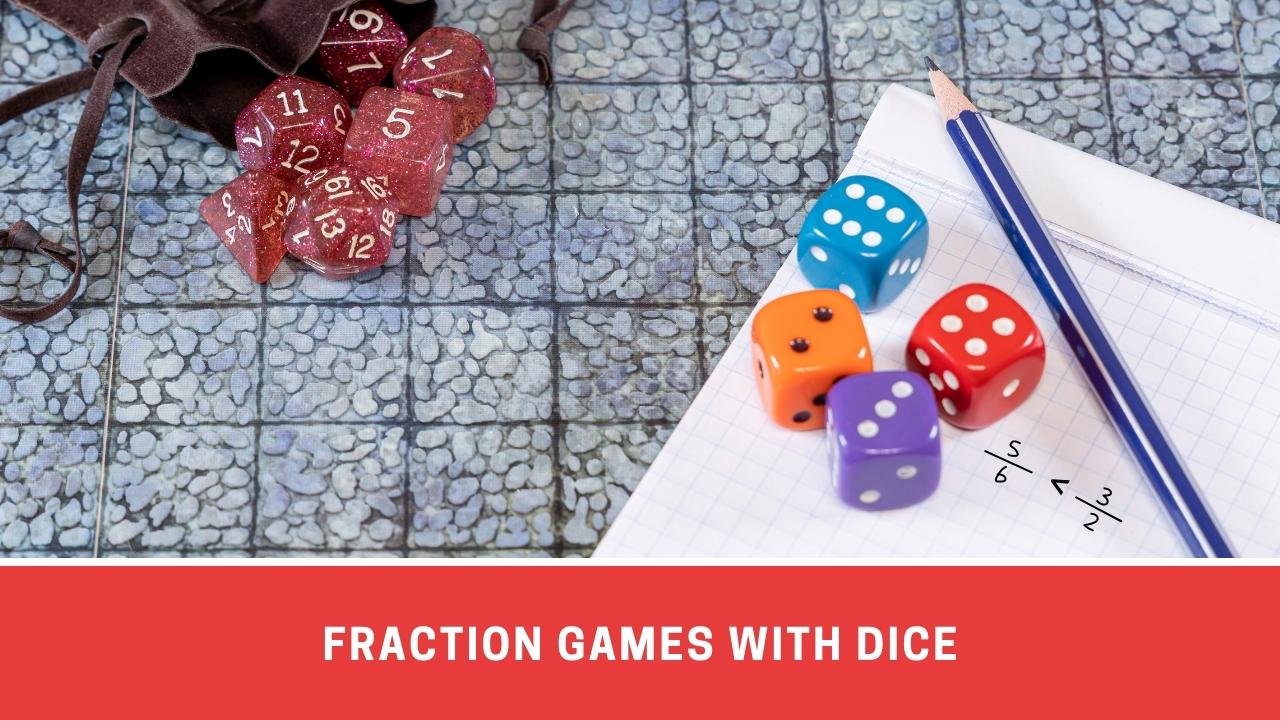 It is undeniable that the essence of board games has been unruffled. These games are often fragmentary without dice. More than just being an imperative part of the games, dice have turned handy in learning a vital mathematical concept, which is fractions!

In this post, we have compiled a list of games that would make fractions an easier and more approachable topic.

Games for learning fractions with dice

When it comes to playing games with dice to learn the concept of fractions, it is important to choose those games that have a practical and engaging approach. We are mentioning a few games that would elevate the learning process by making the fractions more interesting. These games mentioned below are more about interpretation than academic learning, thus making it easier for students to understand why they are learning fractions.

This is a game designed for beginners who want to learn more about reading, interpreting, and simplifying fractions. It provides an easy introduction to this topic, along with making learning a fun process!

To begin the game, three dice would be required. Each player would roll the dice and create a fraction using the three numbers. Like, 4,3, and 6 are the three numbers that one person got after throwing the three dice, respectively. In the next step. The student would have to create a fraction using these numbers. Example: 4/36 or 6/34. The last step would entail the simplifying of the fraction created in the previous step. The ultimate goal of the game is to make the largest fraction, which would make the player win the game.

READ :   10 Cool Board Games That'll Make Geometry Interesting For You

Larger Fraction is a game that is very easy to play and is for students and educators who wish to approach the topic of fractions in a practical, and non-traditional way.  Being poles apart from the conventional methods, a game-based learning environment would help break the monotony.

Being for 2 players, in the game, both players roll the dice two times. Using the numbers generated, they would form a fraction. From the fraction, the players would need to come to a reciprocal of the fraction they have formed. The player with the larger reciprocal wins the game. This would help improve their concentration and understand fractions in a more practical and entertaining way!

The mixed Fraction Challenge would help them learn more about improper and mixed fractions and practice them using dice. A mixed fraction challenge can encourage the students to understand a topic that could get a bit tedious to learn otherwise.

In this game, students would be divided into 2 small groups, and each group would be given 3 dice. Each member of a team would roll dice.

Each group would roll the three dice and make an improper fraction or a mixed fraction. For example, the numbers generated are 3,6, and 1. Students will make as many fractions by combining all the numbers. After determining which fraction is greater, subtract the fraction made by 2 groups to find out by how much one fraction is greater than the other. The difference of 2 fractions will be the score points of the group with the bigger fraction. After playing it as many times as you want to play, then add the scores to find the winner group! This activity is a great exercise for students who are facing challenges in the concept of fractions.

Compare Fractions is a really easy game, and the multiplayer feature adds to its charm. Playing a game with friends is a fun way to understand a new topic, and it adds to the competitive spirit inherent in all people. It is a 3 player game and focuses on comparing and ordering fractions.

The first step is to roll the dice individually and write down the fraction created in the process. In the second step, the students will arrange the fractions from smallest to largest. This would ensure their reading comprehension of the numbers.

Each player has a choice whether to roll the dice again after the first attempt or to freeze the number. It is now for the student’s instinct to decide what to do. The game would help them with fractions, estimation skills and would also build up some more personal skills related to critical thinking and intuition.

The popularity of Tic Tac Toe among students is undeniable. It is one of the most popular games that children and adults play and love equally. This game is also available in the fractional version. In this game, the students have to be divided into two teams.

Understanding the concept is as crucial as retaining it when it comes to mathematics. These fraction games can potently enhance the student’s learning ability and amp up their confidence levels. Moreover, playing with the dice will also enhance their ability to add numbers together.

If the kids know the basic rules of operation on fractions, subtraction, and multiplication, the dice games will build their critical thinking skills. Furthermore, playing dice games can expose the students in a way in which it can make them better with probability, manual dexterity, and social skills. Although a dice is traditionally cube-shaped – with six faces usually numbered from one to six, other types are also available in the market.

To constructively teach students mathematical concepts like fractions with dice, remind them how to roll the die and tally the number of dots on its exterior. For example, you might roll four dots and model computing to four using your fingers. Then take four blocks and commence assembling your tower. Let the pupils roll the die, figure their dots and select the appropriate number of blocks too. The advantages of playing dice games for children are numerous!