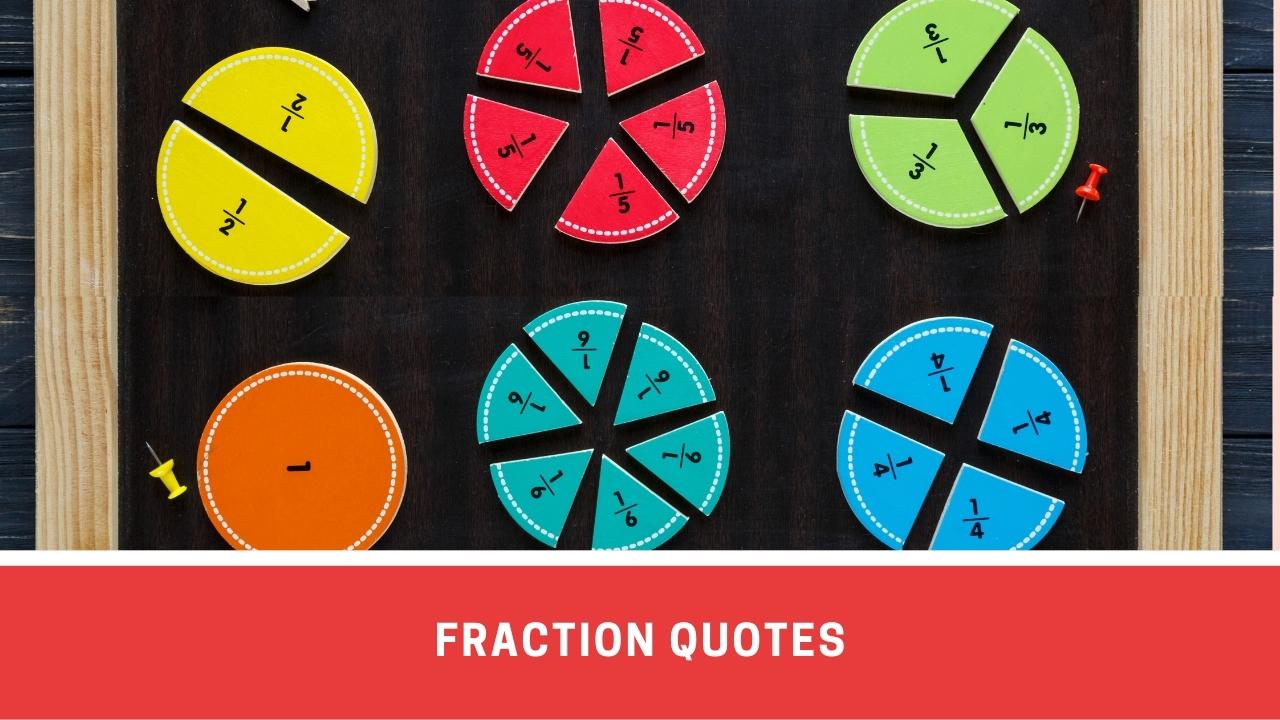 A quote offers one a second voice that reinforces our thoughts and beliefs. It also serves as that tiny bit of motivation, makes conversation impactful, or lightens up the atmosphere when used. Quotes also help us remember the matter better as witty and different words stay in memory. They prompt us to think in new directions and fuel our creativity too.

When used in learning subjects in school, quotes might be a fun way to get the learners to pay attention or liven up their spirits, Primarily when used in Math which is considered a dull and feared subject. In this post, we will go through a few quotes that will make the concept of fractions fun.

Fraction quotes: Can they help with better inculcation of the concept?

Math is either loved or hated. Most of this is dependent on the way the subject is explored. Some math quotes are an excellent way to supplement lessons and prompt the students to look at them with a different view. Once the viewpoint changes, the interest levels rise and therefore there is a better inculcation of the concept.

The subject of Math is not just about numbers but also is applicable in our daily life. Quotes reinforce this and ignite that interest in the learners.

Projects, making models, field trips and other activities help make education more fun. Usage of quotes could add to the enjoyable aspect of gaining knowledge of Math. Fractions when introduced initially might seem very confusing for a child. Quotes related to the topic might help hold the child’s attention and therefore make learning easier.

2. The advantage of growing up with siblings is that you become very good at fractions. – Robert Breault

3. The happiness of life is made up of minute fractions. – Samuel Taylor Coleridge

4. Is it not clear, however, that bliss and envy are the numerator and denominator of the fraction called happiness? – Yevgeny Zamyatin

5. The student of arithmetic who has mastered the first four rules of his art, and successfully striven with money sums and fractions, finds himself confronted by an unbroken expanse of questions known as problems. – Stephen Leacock

6. The only way I can distinguish proper from improper fractions is by their actions. – Ogden Nash

8. Five out of four people have trouble with fractions. – Steven Wright

9. Probability fractions arise from our knowledge and from our ignorance. – Ian Hacking

10 ) I continued to do arithmetic with my father, passing proudly through fractions to decimals. I eventually arrived at the point where so many cows ate so much grass, and tanks filled with water in so many hours I found it quite enthralling.– Agatha Christie

11) Most men are individuals no longer so far as their business, its activities, or its moralities are concerned. They are not units but fractions. -Charles Dickens

12)The art of detection is finding a common denominator for the fractions of a case.– Elsa Barker

13)Life is hardly more than a fraction of a second. Such a little time to prepare oneself for eternity! -Paul Gauguin

14)During the year, our schools are busy slashing P.E. and recess to make more time for math. During the summer, we get ourselves worked into a tizzy that our children will forget their fractions.– Darell Hammond

15)We live our lives by measures of weeks, months, and years, but the creatures we truly are, those are exposed in fractions of moments. – Joshua Gaylord

16)A fragment is not a fraction but a whole piece. – Lyn Hejinian

17) Most people can’t think, most of the remainder won’t think, and the small fraction who do think mostly can’t do it very well.- Robert A. Heinlein

18) I have one aim only: to impart a fraction of the meaning of the word now. – Frederick Soloman Perls

To Sum it up

A subject like Math can be made more interesting with quotes. Having quotes of fractions displayed in the classroom will create an ambiance for Maths. Quotes not only lighten up the atmosphere, and change the learner’s outlook but also motivate them and inspire them about life. Teachers can use these quotes to motivate and encourage their students to learn about the intriguing concept of fractions. By putting them up on the bulletin board, or changing one quote daily on the blackboard amps up the enthusiasm of the kids, as they become more inclined towards learning about the concept.