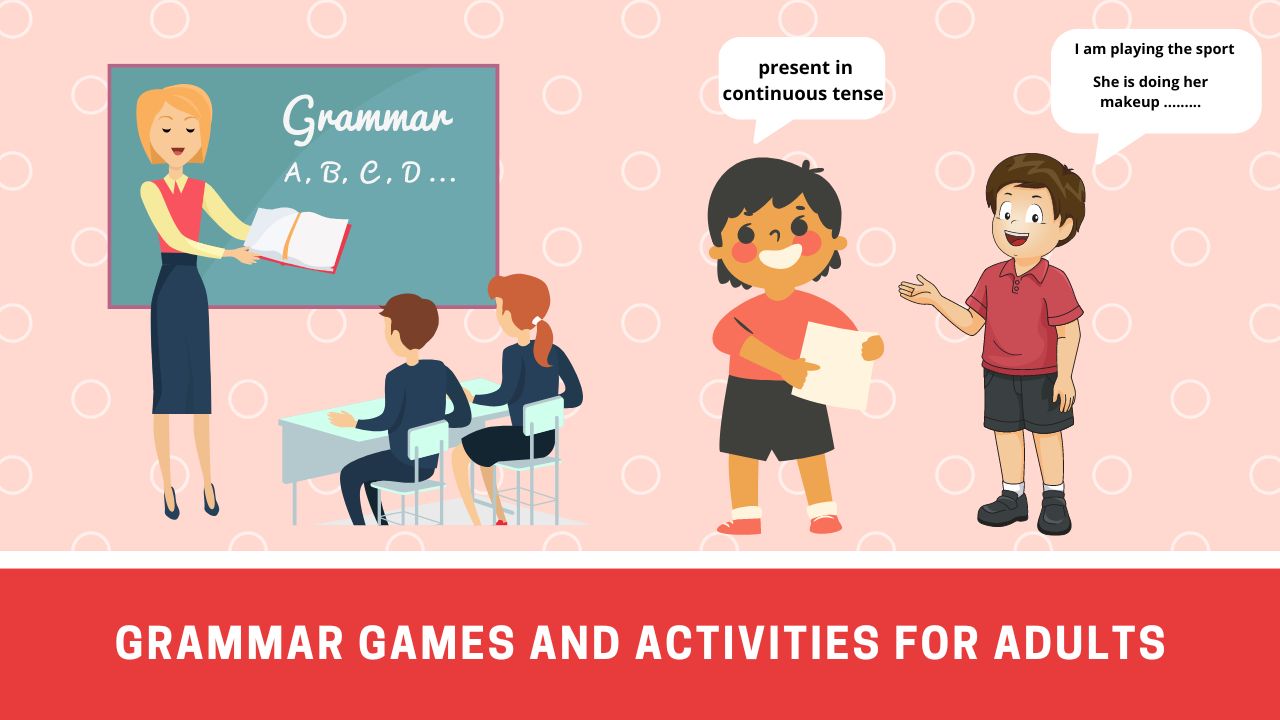 We all know how education surrounds us everywhere! Whether you go to the office or simply at the grocery store, you’re bound to come across advertisements, hoardings, and everyday communication. All of this comes to you in unconventional ways yet they make you read and instantly connect with the text. Through all these languages, grammar connects with you every day.

As humans, we are bound to spot hilarious grammatical mistakes in news, magazines, and social media too. Even when you can recognize written communication errors, it is equally crucial to analyze the common errors in our verbal communication. There are instances when we as adults tend to make grammatical errors even after acquiring a sound knowledge of the subject matter. These common errors might change the context of the statement leading to disappointment.

What comes to the rescue in such situations is to practice a lot and engaging games and activities can be the ideal option for the same. As grammar is a comprehensive term, games and activities focused on varied grammatical concepts help you enhance vocabulary, learn new spellings, and improve verbal communication skills. Such activities and games require no heavy preparations hence, can be easily played with large groups.

Games are ideal to create a challenging environment for adults. These games can be played with social groups as well as organization employees. Since games include factors like winning or losing, they boost individual confidence and vocabulary. Check out how interesting games can amplify your surroundings with grammatical vibes.

Presenting a fun game where adults can engage in various grammatical concepts while challenging the other teams for this game.

This is a super fun game filled with creativity. It challenges members to come up with various statements of grammatical mistakes. Payers also get to understand grammar in a deeper sense thereby enhancing their critical thinking abilities.

2. Talk About Your Vacation

Presenting an entertaining game that involves note taking while also understanding the grammatical concepts. This is an easy game and can be played with large groups.

3. Here is your Error

This is an engaging game that can be played in large groups. The game focuses on building written communication skills while taking care of different grammatical concepts like nouns, verbs, adjectives, punctuation marks, and correct usage of these subjects.

This game inculcates grammatical understanding among all players; they also get to understand the essence of return communication and how different words convey stories in different contexts. To increase the difficulty, you can have a host to cross-verify all the grammatical errors spotted by different players for the final result.

This is an interesting game that can be played in teams or with individual players. The game aims to test the understanding of adults with reference to prepositions. For this game, you need to have different prepositions written in the chit and then put them in a large box or bowl.

Such a game imparts knowledge on prepositions while fostering an environment for team building. Players learn to collaborate and make collective efforts to win the game. The game provides a good opportunity to recognize as well as explore multiple pronouns that can be used in everyday communication.

Presenting an entertaining and creative game where adults can indulge in learning as well as collaborating with different team members. The activity aims to enhance their understanding of various grammatical concepts while being innovative with colors.

This game creates a challenging environment for all teams. As these teams are equipped with three blank sticks, they can go creative and write grammatical concepts by being spontaneous. The game enhances team-building capacities and individuals get to learn and recognize grammar in a quick sense.

Grammar-based activities are a good way to inculcate an understanding of different grammatical concepts while keeping it fun. These activities can be played in social groups or even with employees in an organization. As activities do not have the concept of winning or losing, participants are more likely to show enthusiasm and creativity.

Presenting an interesting activity that can create a fun learning environment for adults.  This activity tests the knowledge with reference to nouns. As nouns are of different types, adults are more likely to get tricked yet enjoy the activity with fun banter.

While it seems to be a simple activity, it is quite tricky for players to quickly understand the letter as well as recall a noun for it. Such an activity tests adults with reference to their understanding of different types of nouns. It also enhances vocabulary and players get exposure to different kinds of nouns.

2. Tensed about the Tense

This is an interesting game as players are more likely to make a variety of mistakes in understanding the tense. Additionally, it allows other players to understand how tenses work and adults get to brush up on their skills. The activity also teaches the importance of using different types of sentences in different situations.

Such activity creates enthusiasm among players as figures of speech are generally used in creative writing. It also enhances their critical thinking by being active and taking part in a challenging environment.

Introducing an engaging activity to make adults understand the importance of using different adjectives. Adjectives not only make a conversation easy but adults also get to understand how to use an adjective in the correct manner to lay emphasis on communication.

The activity focuses on imparting knowledge about different adjectives and their application. While an object may be easy to see and feel, it can be challenging for adults to derive adjectives for it. Hence, this activity boosts their creative thinking and enhances their vocabulary.

Presenting an interesting activity to boost knowledge about various grammatical concepts. The activity aims to provide comprehensive knowledge about a plethora of topics just in a single time.

This is a fun activity as adults might not initially recognize minor differences between the parts of speech and the grammatical concepts. They can also be confused with the types of nouns. In this situation, the activity is a good way to clarify their understanding thereby creating enthusiasm to learn more.

Grammar for grown-ups: What does the research say?

While grammar is a comprehensive branch of the English language, it is used in everyday communication. Whether in a social setting or a formal office setting, adults are bound to use grammatical concepts to a great extent in written as well as verbal communication.

Significant research[1] was conducted to analyze the usage of unconventional grammar in text messaging. Children as well as adults are often engaged in technological advancements for everyday communication. The research suggests that text messaging to various mediums leads to poor grammar skills. If children make grammatical errors in messaging, they are more likely to make them in their communication.

Hence, the research led to the conclusion that individuals make grammatical mistakes when their core concepts are not cleared. It can be said that core grammatical understanding is crucial for personal and language development.

Another important research[2] was conducted to analyze the impact of aging and the loss of grammatical sense. For the research, adults were given a short version of the vocabulary subtest of the Wechsler Adult Intelligence Scale. They were asked to identify 12 different words. Adults were also provided with a 20 minutes sample of speech and then they were asked to relate some of their stories with respect to their first job, experience, or marriage.

The samples of their speech were recorded for analysis. In this research, it was concluded that adults make the most common grammatical mistakes with singular and plural nouns, past tense, verb forms, demonstrative pronouns, articles, adjectives, and prepositions. There were more than 35 grammatical forms where adults made errors. Gerunds, modal auxiliary, and participles were also some of the common grammatical errors made by adults.

Grown-ups should engage themselves in reading different books and enhancing knowledge through online applications. They can also opt for different websites that provide useful insights on grammatical concepts. Now that you have the list of different games and activities, try it in your social groups, office, or with your siblings. These activities are sure to create a fun learning environment for everyone!