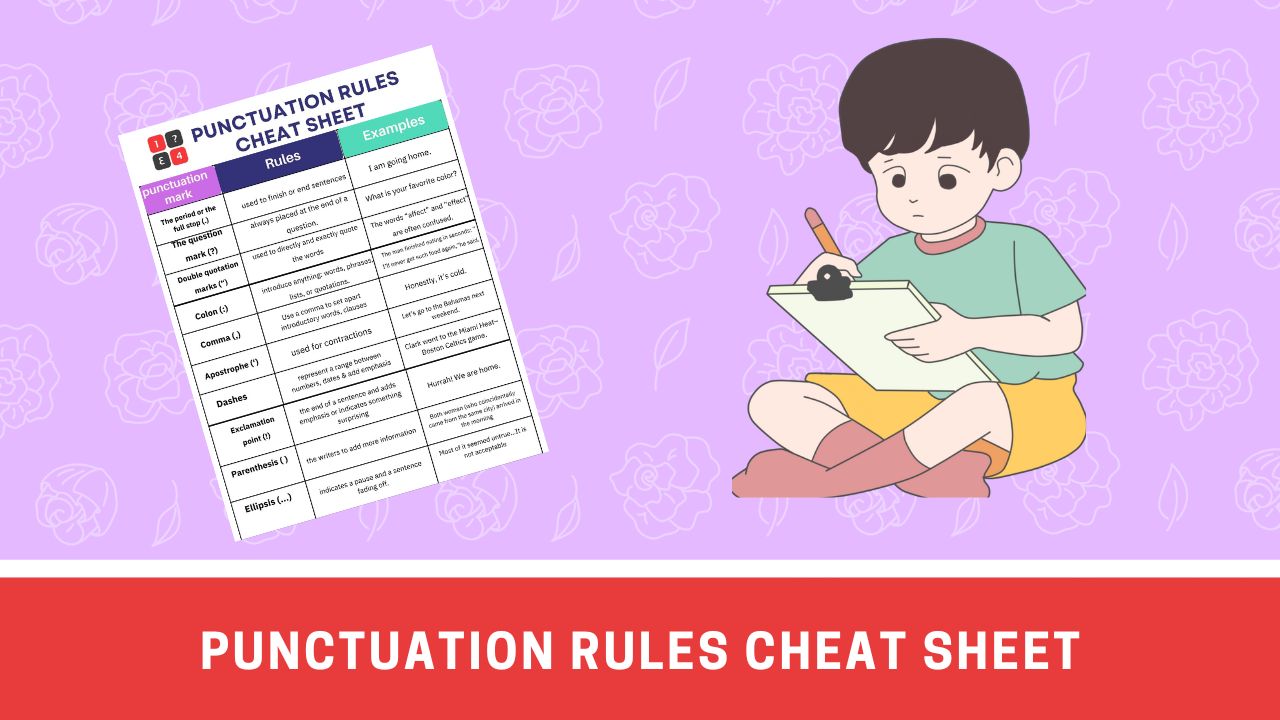 These are two sentences with the same words but different meanings. What made all the difference? Your mind automatically read these two sentences differently because of the punctuation.

Punctuation marks, as they are commonly known, help to add emphasis or pauses in ideas or thoughts that are depicted in the text. Without correctly placed commas, periods and semicolons, the meaning becomes much more difficult to decipher. In the English language, punctuation marks play an important role in communicating meanings.

The following post gives an insight into the rules of punctuation and a cheat sheet to help you with the same.

Important punctuation rules you must know about.

Punctuation is essential and is used to convey and clarify the meaning of written language. Getting punctuation wrong can change the entire meaning of a sentence.

So, how do we know if we are getting punctuation right or wrong?

Here are some simple rules for using punctuation marks in English.

Use a period to end a statement, mild command, or indirect question, and after most abbreviations.

Use a question mark after a direct question.

Use the comma to separate items in a series.

Use a colon to call attention to the words that follow it.

Use the apostrophe to indicate possession, mark contractions, and pluralize letters or numbers.

Use quotation marks to enclose direct quotes and around titles of short works.

The correct punctuations in English help you articulate the ideas clearly, and accurately and fosters the understanding of the message. It gives the text a logical structure, making it easier to read and comprehend. There are many punctuations and the wrong usage can alter the meaning of the sentence. Therefore it becomes important to use them correctly.

Cheat sheet to help you with the right usage of punctuation.

The period or the full stop (.)  is used to finish or end sentences. Use it when you want to end the sentence.

The question mark (?) is always placed at the end of a question.

Double quotation marks (“) are used to directly and exactly quote the words of someone and for words used as quotes.

A colon is used to introduce anything: words, phrases, lists, or quotations.

Use a comma to set apart introductory words, clauses (in a complex sentence with a dependent clause first), and phrases.

To separate items in a series or a list

To set off quotations.

An apostrophe can be used for contractions (or a shortened version of a word):

Apostrophes are also used in possessives.

There are two types of dashes: en dashes and em dashes. En dashes (–) represent a range between numbers, dates, and times. They also establish a relationship between words and ideas.

Em dashes (—) are extremely versatile and can replace commas, colons, and parentheses. Like colons, they can help add emphasis.

An exclamation point is found at the end of a sentence and adds emphasis or indicates something surprising.

An ellipsis (plural form is ellipses) is three dots that indicate an omission. It’s often used in journalistic writing for quoted materials. It also indicates a pause and a sentence fading off.

How can students use this cheat sheet?

A cheat sheet can be of help to children who are unsure of the punctuation they use or are learning to use them. By providing them with a list to refer to, students can make use of it while learning the usage of punctuation. It will also serve as a reference guide for the rules of punctuation.

To wrap up, it is not wrong to say that one of the most difficult parts of learning English is understanding how to properly use punctuation. Because there are so many, it can be easy to forget what each one does while you are still learning. Having a cheat sheet help you remember it all and can really help cut down on your learning time.

Cheat sheets are one of the most popular ways to learn new things, whether it be a punctuation of a language or a mathematical formula. They can help you learn faster, and they’re also great for test-taking. Cheat sheets take all of the confusion out of learning and memorization.