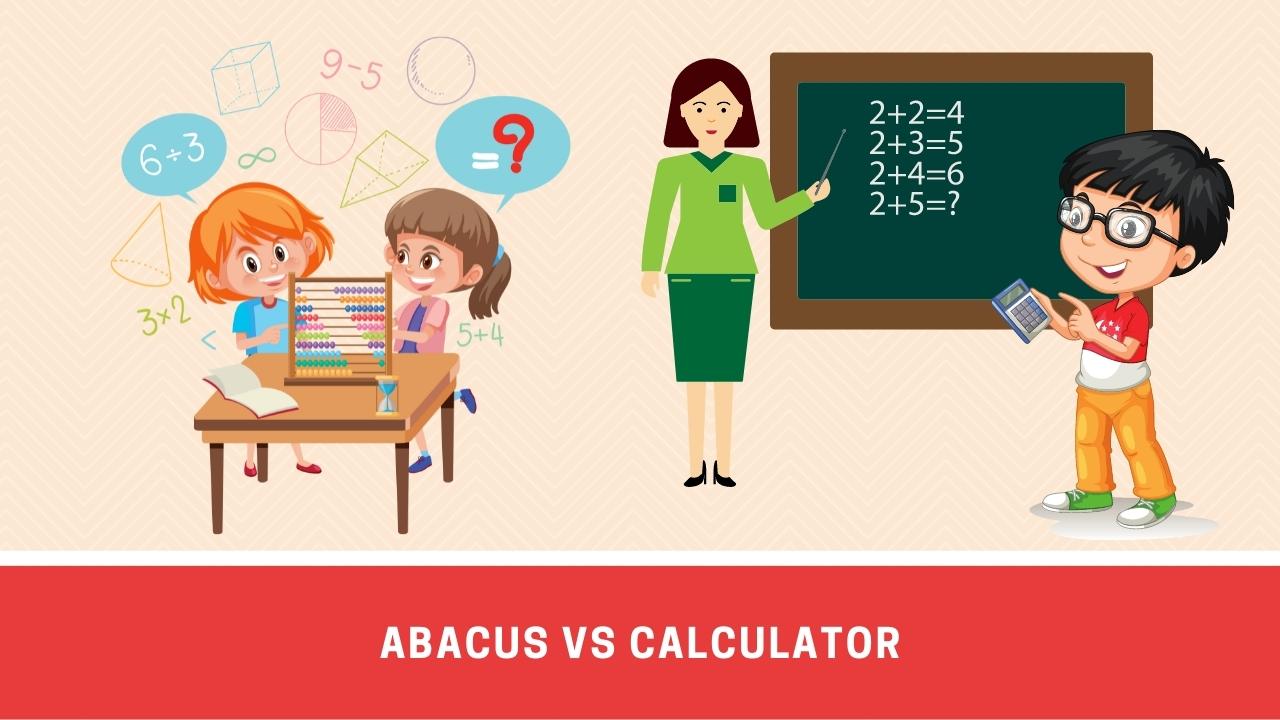 Math has been around for centuries, and there are a variety of tools that have been used to help with calculations. Two of the most popular are the abacus and the calculator. However, being used for the same idea, both are poles apart, hence, what is the difference between the two technologies?

A calculator is a device that performs arithmetic operations on numbers. The most common type of calculator is the electronic calculator, which uses a variety of input methods to perform operations on numbers whereas an abacus is a device that is used for counting. It is a frame with a number of beads or balls that are moved along the rods to count. The abacus is a manual device that is used for addition, subtraction, multiplication, and division.

In this post, we will navigate through the basic differences between Abacus and Calculator and understand what science says about the two.

While the abacus is one popular tool that is versatile and easy to use, there are mainly two ways in which people use an abacus.

Calculators, on the other hand, have functions mostly related to mathematical operations.

READ :   Is playing piano difficult for individuals with dyscalculia?

Does one have an edge over the other?

Both abacus and calculators excel at performing mathematical calculations due to their historical background dating back millennia ago. However, most countries now use electronic calculating devices instead of old-fashioned counting boards and have replaced them worldwide anyway. Nonetheless, both old-fashioned counting boards and electronic calculating devices are useful tools for teaching math skills as they complement each other quite well when used correctly.

Long-term benefits of the Abacus

An abacus is a manual device used for counting and has its own benefits.

While the calculator is an excellent tool for estimation and computation, on the other hand, it also has some downsides.

Abacus vs Calculator: What does science recommend?

Research has suggested that children who have skilled in mental abacus have shown to exhibit great arithmetic abilities. Those children who have been taught abacus functions in their early years have enhanced non-symbolic number sense and skills. Abacus learning seems to build a solid foundation of mathematical aspects for children and makes mental math easier.

Using a calculator on regular basis may inhibit basic skill acquisition for students. While performing basic processes like addition or subtraction using a calculator, children may get used to the convenience of a calculator which might take away their learning of those skills from them. The calculator can be of efficient use once the foundation to perform simple math is built. Its use makes more sense when long complex problems are to be solved in later stages of education such as derivations or integrations.

Both- the abacus and a calculator are visual and kinesthetic tools, an abacus can teach concepts better and a calculator can solve problems of time and speed. They both have their effective uses in their own places. For enhanced learning, students should be introduced to abacus math and later on given the provision of calculators once their understanding of concepts is clear.

In a challenge presented between the usage of abacus and calculator the abacus won by 4 points to 1 and therefore was believed to be more popular.

Results showed that, with addition and subtraction, the abacus has an indisputable advantage over the calculating machine. Its advantages in the fields of multiplication and division, however, were not so decisively demonstrated.

Although an abacus and calculator are both calculating tools that can perform major mathematical processes such as addition, multiplication, division, and subtraction, there are many differences between the two.

The abacus and calculator are both mathematical devices and even though the abacus is not widely used in today’s time, it was quite successful in its own time. The abacus enhanced mental math abilities and even had a fine impact on memory. Given its major benefits, the use of the abacus faded away because times changed and new technology came to rise.

The calculator is a modern device that is much easier and swift to maneuver. It performs all processes of mathematics smoothly and quickly and is preferred by most people. The abacus can help in the initial years of education of children to teach them the basics of mathematics and build a foundation for the same. However, with time its use will become redundant and children are more likely to shift to electronic calculators once they are capable of doing so.