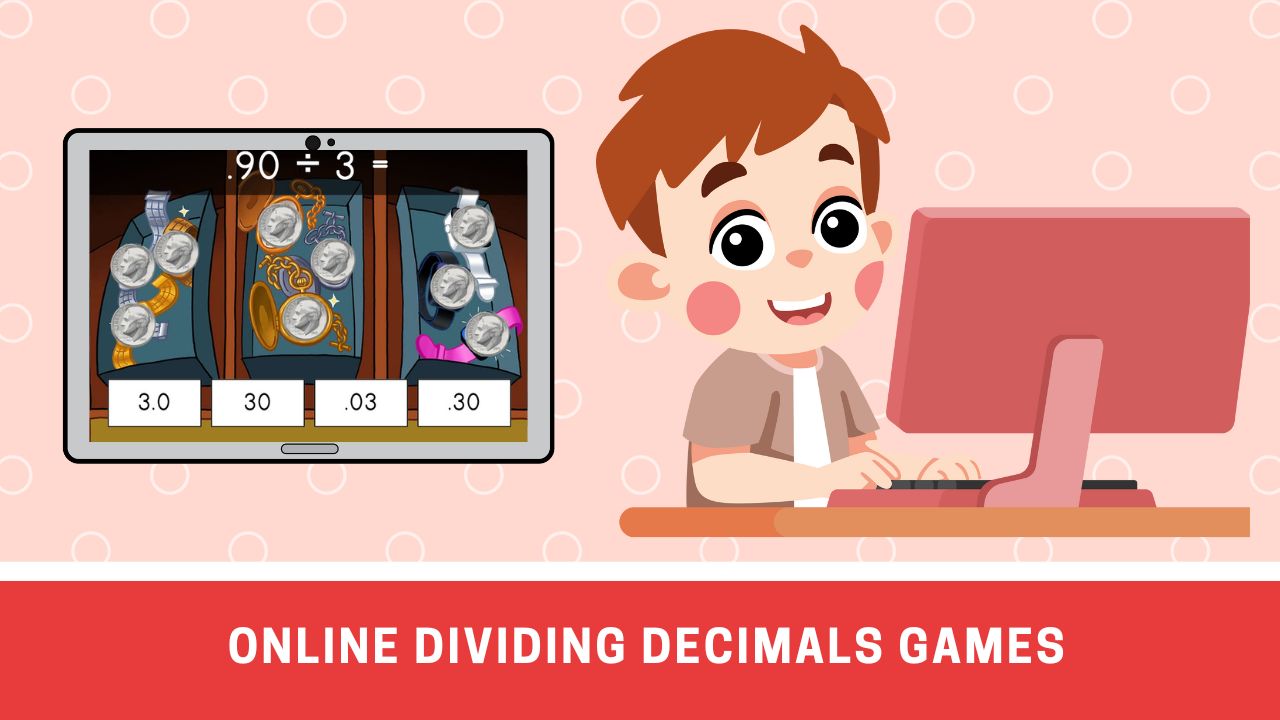 Learning the division of decimal numbers doesn’t have to be boring. Online games mentioned below can help to practice this mathematical concept and build a strong understanding.

1. Shopping: Decimal divisions to the tenths

This is a fun and interactive game to practice dividing decimal numbers. Students get the chance to buy stuff using dimes available to them for shopping. They have to spend the dimes equally on all the products before moving forward. Once they shop for their fun stuff, they need to work on solving the problem of dividing decimals. Every correct answer gives them the opportunity to shop for more fun items and proceed in the game. The game is designed to teach players decimal division to the tenth place.

This game helps to build a conceptual understanding of dividing decimals. Players have to use the regrouping method to divide the decimals. The questions in the game cover dividing decimals up to two decimal places. The game begins by asking players to divide gold equally between two miners. In the following questions, more miners join in, making the question a little more challenging. Players need to successfully solve a question before moving on to the next one.

Here is a supermarket challenge to teach decimal division and let players know how they can use this math concept each time they go shopping with their parents. The game presents questions that require players to divide decimals up to two decimal places. The best part about this game is that it brings other characters to converse with the main character to discuss how they can solve the question at hand. It gives subtle hints to guide players to solve the problem correctly.

Here is a game that allows students to practice converting decimals into fractions and dividing them to find the answer. The game is based on the story that Decimalware ÷, a destructive software, is attacking computer systems. Players need to protect computers by installing antivirus software which can be completed by solving questions that appear on top of the grid. The decimals must be first converted into fractions to get the correct answer. Dividing decimals becomes less intimidating when practiced through this stimulating and engrossing online game.

In this game, the player is presented with ten decimal division problems, all at once, on the screen. Players must solve the questions as fast as they can and match them with their correct answers. After submitting answers, players have the option to check which questions they got wrong, and their correct answers. The game also has a leaderboard to display player rankings and the time they took to answer all the questions.

This online board game is great to encourage competitiveness as it can be played by two players. Players have to roll the online dice to see their questions. After player 1 submits the answer, player 2 gets a chance to roll the dice and work on a different question. The game is not restricted to questions related to dividing decimals, but also covers other areas like addition, multiplication, and subtraction. Hence, this game is good for practicing all aspects of decimal numbers.

Mathnook brings a thrilling game filled with adventure and speed for those who love to play action-packed games. Players can enjoy this car racing game along with practicing their math skills. To keep their car moving, players must collect fuel from time to time and carefully control their cars to avoid collisions with other vehicles on the road. Players can fill up their fuel tanks by running over cars that indicate the problem whose answer matches the player’s car number. Interesting, isn’t it?

We come across decimal numbers almost every day. Whether we are counting money, calculating our bills at the grocery store, or visiting a gas station to refuel a car, we have to do our calculations with decimal numbers. Therefore, students must learn how to round off decimals for easy estimation and perform direct calculations to deal with these numbers in daily life.