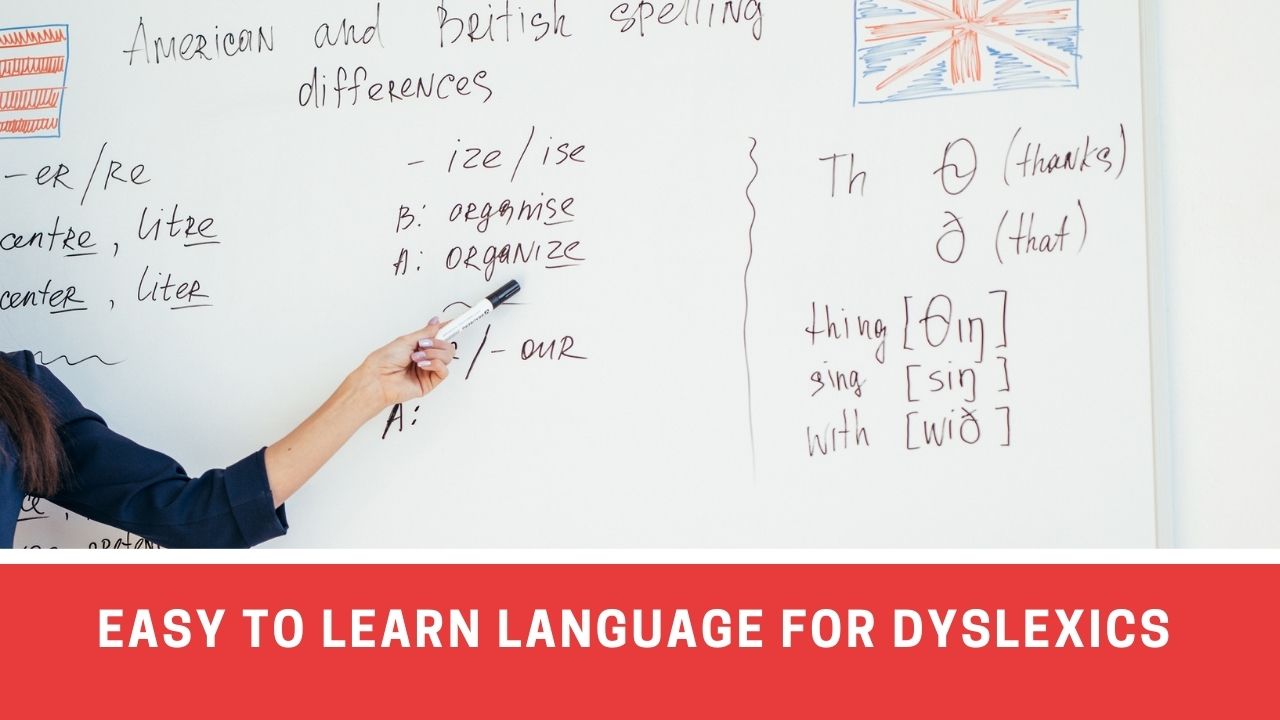 REVIEWED BY NUMBERDYSLEXIA’S EXPERT PANEL ON MAY 19, 2022

Alternatives can sometimes be the best solution. If an individual cannot proceed with one method, another way can make their task easier.  The same is the case with languages for dyslexics too. Factors like sounds and phonics make language arduous for individuals with learning disorders. While striving to learn is a fair idea, looking for an alternative easy language to make things easier can be another fitting solution. Easy languages here mean those that are lesser inclined towards phonics and sounds.

While these requirements are perfectly discerned, is there any language that is easy to master for Dyslexics? We came up with all relevant insights and a list of language choices a special individual can choose to add to their portfolio smoothly.

Dyslexia – Is it related to language?

Dyslexia can be defined as a language-based learning difficulty that is known to affect the reading and comprehension skills of a child. Dyslexics, apart from general myths, have good IQ quotients. The only areas they may need to strive for are syntax, grammar, components of language, and phonemes.

A research study done by Li Hai Tan[1], revealed that the linguistic content and its extent of regularity determines its effect on the brain functioning and eventually determines the capacity of an individual with dyslexia to learn it. In his research, Li Hai Tan has compared Mandarin and English languages to see if the level of Dyslexia varies. It is seen that English is more phenomes based, whereas Chinese is more about intricate strokes. This implied that Chinese was comparatively easy as it needed better visual-spatial skills only for the learner. The results pointed out that while Visio-spatial and phonemic skills deficits coexist in Dyslexics, the effects vary from one language to other due to varying needs to imply these.

For example, the Italian language has only 26 rules which require about six months to train.  On the other hand, English has a number of rules. Irregularities between them may take Dyslexics a longer time to establish mastery over the English language. Thereby, it is clear that there can be an easy language for Dyslexics to choose from.

Components of a language & associated cognitive challenges that come with dyslexia

It is important to accommodate the environment and the learning methodology for Individuals with dyslexia instead of doing away solely on the basis of disability around the various components of language.

Here we shall discuss the nature of components of a language and how they can be fitting for an individual with dyslexia.

The distance and angle at which the viewer is looking at the script may impact their language ability. While we call it Orthographic depth, it is the most important component of language. This factor can determine the level of cognition for Dyslexics too. Analyzing the words and exactly transcribing them is important, and the right orthography is one of the key factors here.

The second component accounts for the pattern underlying the structure of a language. The lesser-known fact is that morphological awareness of the language also plays an important role in reading for an individual with dyslexia. In a research study done by Casalis and Cole[2], it was found that individuals who develop the understanding and awareness of the morphology of the language they learn can actually compensate for the reading deficit in the same.

Accordingly, choosing languages with a consistent and simple morphology would be the right choice to learn. Another morphological feature would include the grammatical consistency and the use of phrases. It would be preferable to choose a language where the transformation of words into sentences doesn’t require too much effort and aids in the easy retrieval of information.

Thus, an individual with dyslexia would prefer to use the (2) sentence instead of the (1) one.

The final source of difficulty in learning the language is the concept of automaticity. The moment we hear the word “car”, an image is formed in our mind of a mechanical vehicle with four tires, an engine, a steering wheel, and more. This is because we have learned how a car looks, and upon hearing or reading the word, it gets processed from our perception automatically, and learning of that word is proven.

Similarly, there are different functions in a language that are required to store verbal information, process incoming speech, use the process information to produce speech, and learn the information.

These functions discussed here eventually become automatic for most people as they practice and learn consciously. Thus, it is important to choose a language for dyslexic learners that has a simpler phonological structure and consistent patterns so that the learning can be initiated and practiced enough, to automate the processing of that information in their brain eventually.

Languages with easy structures for individuals with dyslexia

As discussed above the numerous components of a language besides its transparency and complexity. Individuals with dyslexia find it easier to learn a language that is more transparent in terms of its structure.

Having said that, languages like Japanese, Spanish, Italian, Finnish, Greek, and German have a rather straightforward alphabetic system.

China is one of the important countries in the world where a major part of the exports and imports take place. Learning Chinese can give a good set of opportunities to deal with Chinese people and also get a chance to get placed in that country.

Looking at the inferences given by Li Han Tun, it is evident that Chinese is an easier language compared to English. There are multiple reasons why it can be a good choice for the learning disabled to learn:

It is the national language of Japan. At first glance, it may look similar to the script of chinese. It has a distinct set of simple rules making learning easy.

While Japanese might be considered one of the most difficult languages to learn, they are considered comparatively easier for individuals with dyslexia. This is because Japanese is a character-based language that can be mastered through visual memorization- this is a skill used extensively by dyslexic individuals. It allows easy retention of the language as well as its reproduction. It uses a logograph- a chart of symbols to represent whole words instead of alphabetical systems that have been put together to represent component sounds.

After the Roman empire, multiple languages originated in different parts of Europe[3]. Thereby, learning all these can be started on the same grounds. Also, it is seen that for English learners and speakers, European languages are easy to grasp due to lexical influence

READ :   10 Financial Aids For Students with Dyscalculia, Dyslexia And Other Learning Disabilities

Decoding transparent phraseology is easier. Languages like Spanish, Italian, Finnish, and Greek, fall under European orthography that is considered to be more transparent than languages like English, Danish, and Portuguese. These European accents have simpler patterns and phonemic systems associated with them; that is, they do not require an extensive sequence of words or multiple syllables to represent the sound they own.

This allows individuals with dyslexia to understand these languages more effectively, identify the morphological components, that is, patterns, and retain these components to reproduce the language easily.

Is there any easy language to learn for dyslexics?

Winding up with Insights…

There are several factors that make a language easy or hard for a Dyslexic learner. We discussed these factors along with some easy languages that these individuals can opt to make their communication and portfolio stronger.

While the linguistic point of view holds a major chunk of responsibility when it comes to learning languages, certain behavioral components also play an essential role in learning languages among individuals with dyslexia.

Motivation and self-esteem are instrumental in determining the language learning capacity of an individual. While the languages might differentiate on the basis of their orthographic structure and patterns, it requires relentless work, practice, and repetition to overcome the obstacles that come with the task of learning, let alone a language, with dyslexia. Noting all these points, we have listed out some easier languages that the learning disabled can opt for. Check these to make an apt decision.