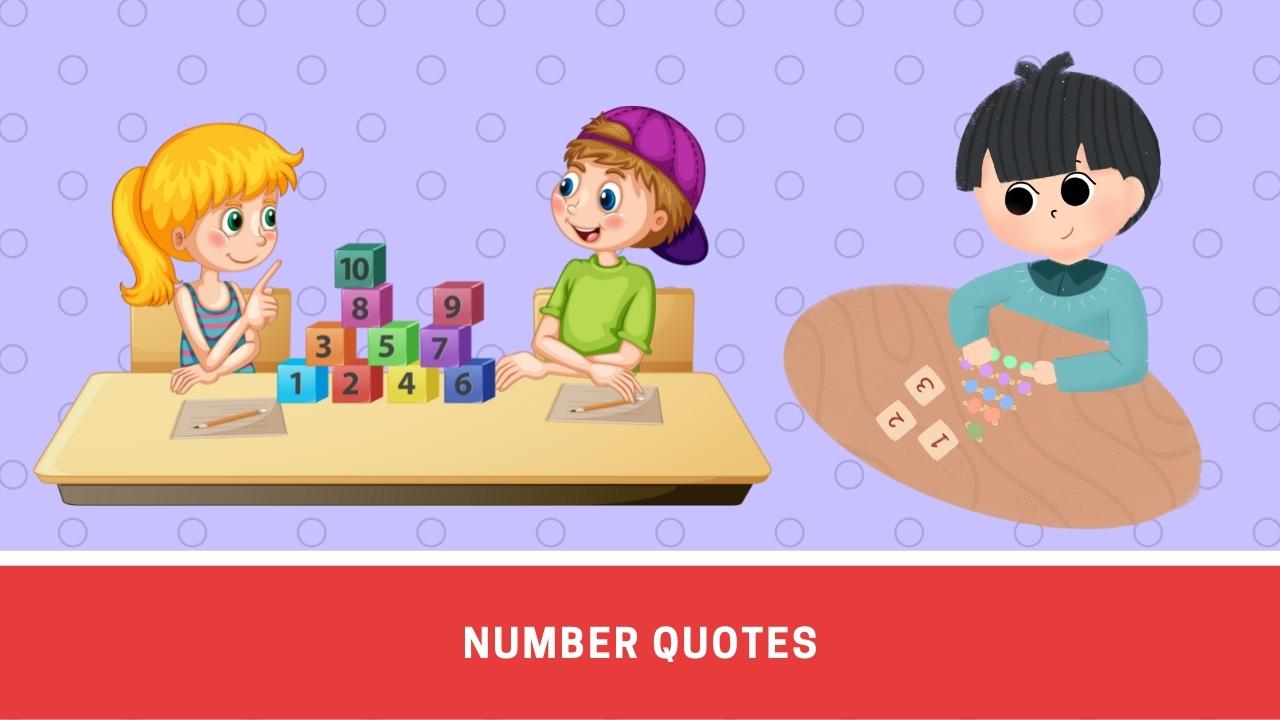 Everywhere we look, there are numbers related to what we do. We use them to calculate seconds, minutes, hours, days, and years. Numbers are a valuable language for counting, measuring, and identifying no matter which numerical system we choose. We can employ numbers in an infinite variety of ways, such as in phone calls, bank account identification, and mathematical calculations.

As numbers surround us everywhere, it is important to understand that numbers can be tricky. Math involving numbers is often perplexing for students to comprehend in practical usage. At times, students wonder if numbers have any practical application in the future. In such situations, it is crucial to introduce numbers through famous quotes and sayings. Quotes help students understand the broader perspective with a rational approach to the concept.

Check out these useful quotes and sayings that help transform the learning environment for students as well as teachers.

Famous quotes and sayings about numbers

1. “God has given us the fascination and mystery of irrational numbers, as one aspect of a rich world” ― Vern Poythress

3. “It may be conceded to the mathematicians that four is twice two. But two is not twice one; two is two thousand times one.” ― G. K. Chesterton

5. “There is always strength in numbers. The more individuals or organizations that you can rally to your cause, the better.” – Mark Shields.

7. “You don’t have to be a mathematician to have a feel for numbers.” – John Forbes Nash

9. “The numbers speak for themselves.” -Kevin Kalkhoven

11. “Numbers are the most certain things we have.” – Andy Rooney

17. “Competition is all in numbers; it’s a numbers game, but I looked at it like it’s a passion, and it’s art.” – Will Champlin

18.. “The idea is to go from numbers to information to understanding.” – Hans Rosling

20. “Numbers are the highest degree of knowledge. It is knowledge itself.” – Plato

21. “Know your numbers is a fundamental precept of business.” -Bill Gates

22. “Math is never just numbers. When words fail us, we use Math to describe the inexpressible. The things that terrify us most. The vastness of space, the shape of time, the weight and worth of a human soul.” – Gaal Dornick

23. “There is strength in numbers, but organizing those numbers is one of the great challenges.” – John C. Mather

24. “Number is the ruler of forms and ideas, and the cause of gods and daemons.” – Pythagoras

25. “Without mathematics, we are blind.” -Alain Badiou

26. “Torture numbers and they’ll confess to anything.” – Gregg Easterbrook

27. “Without mathematics, there is no art.” – Luca Pacioli

28. “Why are numbers beautiful? It’s like asking why Beethoven’s Ninth Symphony is beautiful. If you don’t see why, someone can’t tell you. I know numbers are beautiful. If they aren’t beautiful, nothing is.” – Paul Erdos

29. “Numbers are intellectual witnesses that belong only to mankind.” – Honore de Balzac

30. “The universe tells its secrets through numbers.” – Anonymous

Quotes highlighting the importance of numbers: Bliss for the kids?

While there are various teaching methodologies to inculcate the importance of numbers, it is always a good idea to use quotes from famous personalities to give a universal approach to learning.

As you opt to use different popular quotes and sayings to teach numbers, ask students to stay active and keep searching for similar information. Interest them with questions that revolve around the subject matter. Such sayings are impactful to create a challenging mindset where students understand the necessity of learning numbers.

Additionally, teachers and parents can use a variety of books and worksheets to teach how numbers work. Real-life examples are also a good way to engage students in practical learning. Another way around, develop activities and look for online games around numbers to offer a diversified platform for learning. Hence, it is just the right time to use quotes and sayings to comprehensively elaborate on the role numbers play in everyday life.