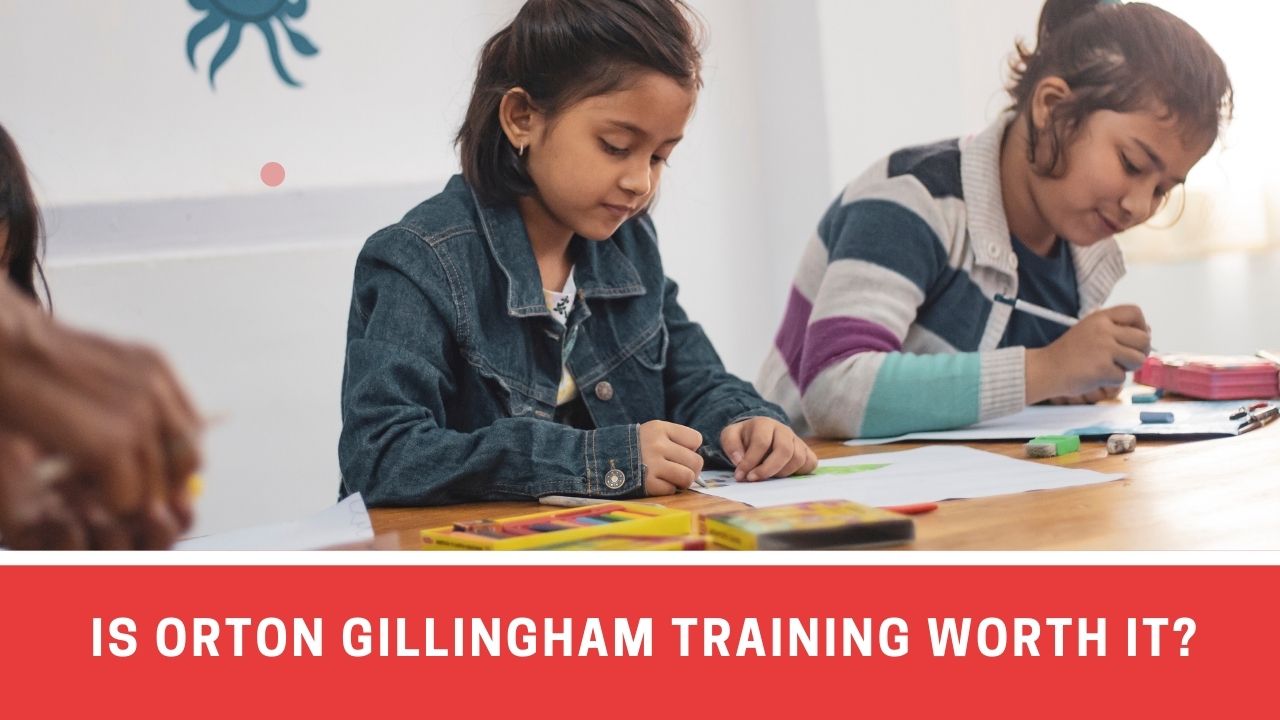 Teachers who have hands-on experience imparting training under the Orton Gillingham approach roughly estimate that even severely dyslexic students (including those suffering from ADHD), gain one grade level in reading within 75-100 hours’ worth of sessions. That can boil down to two hours of the child’s time for a month and a half. This seems to be a reasonable assertion to put the aforementioned query to rest.

Orton Gillingham is not merely an approach, but a springboard of hopes and aspirations of dyslexic children and their parents alike. It opens their eyes to the possibility that dyslexia might merely be a glitch and not a grinding halt.

Orton Gillingham is a structured literacy approach. It employs a multisensory teaching methodology for students who experience difficulty in reading compared to their age counterparts. It has also been extended to be an aid in disabilities experienced in spelling, writing, comprehension, and even in learning mathematics.

What exactly is Orton-Gillingham’s approach?

The beginning of the journey of this approach can be traced to the early 1930s in the works of Samuel Torrey Orton and Anna Gillingham. Orton, a neuroscientist, studied children with learning disabilities and also proclaimed the responsibility of the education system to address issues regarding dyslexia. He also encouraged Gillingham, who was a psychologist and zealous educator to publish her works on teacher training and student manuals for the same.

Thus was born the ‘Gillingham Manual’, which has become somewhat of a Bible for educationists working with dyslexic children. It also contained her works with Bessie Stillman, which includes the widely acclaimed concept of ‘Language triangle’.

The first corner of the triangle is the role of the ‘auditory sense’ in the learning curve. Phonics forms the primary step in teaching the child alphabet reading. There is an attempt made to allow them to interlink the phonetics of the alphabet with its graphic image.

Thus a gradual build up is approached by progressing to syllables and then to the phrases.

Thus, the second corner of the triangle-‘the visual sense’ is called to aid in the process.

The, third corner, that completes the triangle is the ‘Kinesthetic memory’. The perception of movement by the neurons in our brain reinforces the kinesthetic memory. Gillingham thus emphasized on the relevance of handwriting.

Modern day adaptations of the approach also instruct children to draw alphabets on a shaving cream with their fingers. This is accompanied by audibly reading the alphabet, thus reinforcing   the learning triangle.

The cornerstone of this approach, however, is the one-on-one teaching and personalized teaching style that it employs. This in turn makes it both a diagnostic as well as a prescriptive approach. This implies that the teacher continuously monitors the child to zero down on specific strengths and weaknesses of the child. At the same time, efforts are made at taking a nuanced stand targeting the learning processing impairments.

At this juncture, it is crucial to point out that Orton- Gillingham is an approach and not a program. This very feature allows it the flexibility to be molded according to the cognitive needs of each child, rather than employ a straitjacket methodology.

However, this makes it equally impossible to make it a subject of case studies or educational researches. This is primarily because there are no uniform procedures or scripted course of action.

What does the research say?

Consequently, there have been very few researches in the area that may attest to the authenticity of the claims of it being the best approach for dyslexic children.

In 2000, the National Reading Panel incorporated this approach in their studies and reaffirmed the significance of conducting classroom instructions for phonemic awareness.

However, a paper in 2008 stated that the efficacy of the Orton- Gillingham approach is yet to be established.

Thus using research for adjudication of Orton- Gillingham approach will not only be an antiquated mode of practice but will also do injustice to the approach. This is because it has validation stemming from the combined experiences of educators around the globe who have been working with children with special needs.

The credibility of this approach is, thus, primarily based on more than eighty years of classroom teaching and practical implementations by educators. This finds its roots in a strong foundation of scientific evidence on the neural mechanisms which regulate reading as well as studies on dyslexia.

Barton Reading program and Wilson Reading system are few such programs. Wilson Reading System is targeted at teenagers and young adults and uses a unique ‘sound tapping’ system. Barton’s reading system, on the other hand, is more focused on spellings.

What do people say?

Research papers and case studies use scientific methodologies to come to an empirical conclusion. There, however, is a human angle with an entire spectrum of emotions pertaining to this issue as well. Special needs educators, parents of dyslexic children as well as these students themselves who have been discarded by the public system of education have in a sizeable majority welcomed the change in the scenario that this approach has brought about. The emphasis on treating each child an individual with his/her own specific curve of learning has helped them regain their lost confidence in bits and pieces.

This is reaffirmed by multiple online opinion polls and discussions that were conducted to understand the relevance of this approach. Their primary aim is centered at allowing a voice to the people whose opinion in this regard matters the most.

A parent of a dyslexic child elaborated on it. Dyslexic people, she informed us, have brain wiring that is better at 3D visual-spatial thinking as compared to others. However, this results in them encountering difficulty in the 2D linear world of reading. Hence, they require step-by-step explicit and detailed instructions for the same. These are tailor-made to each child and have the flexibility to allow last-minute modifications as well.

A gentleman who himself underwent training in this approach in his formative years shared that it helped him overcome term strephosymbolia or a condition where the letter appears as mirror images of the actual formations.

Training teachers also emphasized that the beauty of this approach lies in the fact that instructions are delivered to the child multiple times till he/she attains mastery on that level, and only then are they allowed to proceed to the next level.

A parent who experienced multiple learning systems with his dyslexic daughter ultimately zeroed down on the Barton system based on the Orton Gillingham approach and an excellent tutor that was trained under it, as the best bet for helping her daughter attain a higher grade level in reading abilities.

Of course, there is a need for more dedicated tutors in the market. In fact, apart from gaining internal satisfaction in helping these children, it can turn into a reasonably well-earning career as well.

These are stories that cannot be substantiated with facts, figures, or case studies. But it has culminated in confidence in this approach that has spawned more than eight decades and unfolded many a small, obscure success stories of dyslexic children who have discovered their destiny in the stars, on the shoulders of their mentors who have to build on the works of both Orton and Gillingham.

Thus, all in all, Orton Gillingham is an approach of which the only legitimate criticism is that is not scientifically verifiable. However, it has undisputedly helped generations of dyslexic children carve a better educational background for themselves by improving their reading and writing abilities.