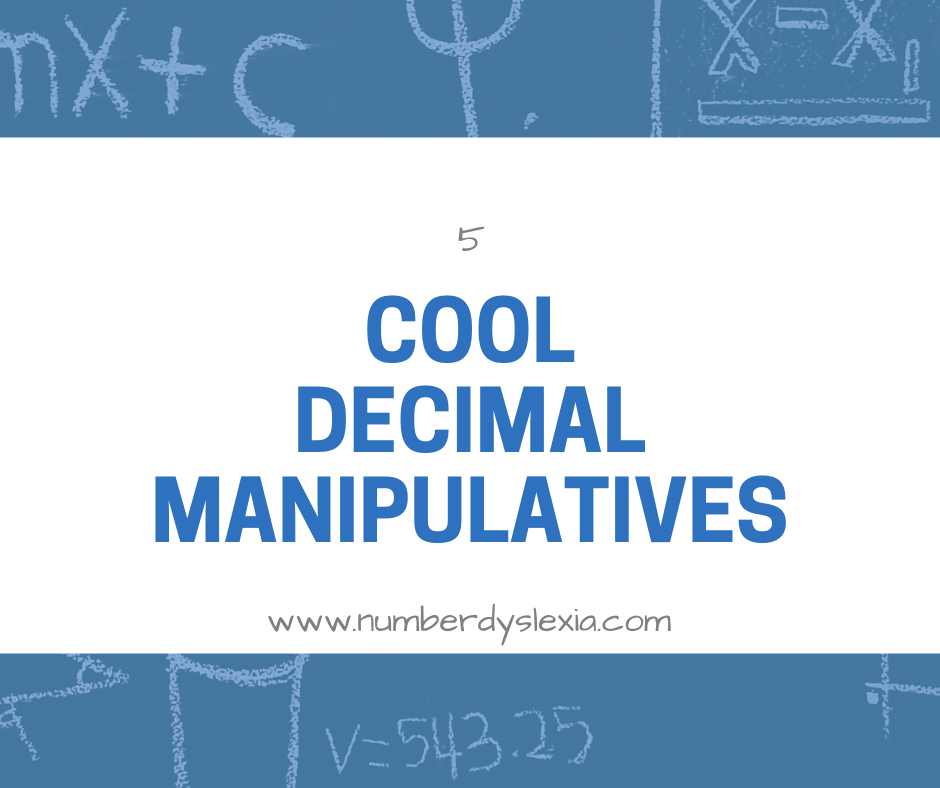 One thing that I frequently observed is how often we use decimals — may it be in exams or in our day to day lives. But ever wondered how much we learnt about it in our school curriculum? I must say, very little. If I recall correctly, other than one or two chapters in junior years and in number system, we hardly saw any particular curriculum focus on dealing with decimals.

May be this is because our school thinks students are capable by then to absorb it as a regular schedule for topics in the subject. Which according to me, is justifiable. But if we go by the actual numbers, research shows major number of students not comfortable with decimals. Now given such a crucial role of decimals in later topics of the subject, it becomes important not to let it left out.

If you regularly follow our blog, you must know how we always support adapting a new learning process early in life. It becomes even more important when you are dealing with a learning disability, such as dyscalculia and dyslexia. Now, the new learning process can be anything alternative approach of studying other than usual tuitions. Adopting the same for decimals early will be beneficial for a long term. There are lot of intervention strategies to go for. One that matters the most is to let the kids experience the knowledge rather than churning the topic for just marks. The ability to have on-hands experience deeply embed the impression of what you are trying to learn. This is best achieved by practicing with manipulatives.

A common ruler in our geomtery box is applicable to whole lot of other educational purposes than just drawing straight lines. You may be surprised to know a good chunk of our experience dealing with decimals may come from using rulers for measurement. So, this is a must in our list of decimal manipulatives.

Teachers must focus on asking kids about the which line refers to which number value with decimals. A good practice will be to measure something and asking how many such decimals line we need to measure the whole, and what number value we get from it. Better to start with the decimals point representing half and quarter portion of the measurement. Then go deep further to a bit challening decimals value such as, 1.4, 2.8, and etc. Although the numbers are limited to mark on scale but still enough to experience the basic concept of decimals in primary schoolers.

Dominoes have long been used as a math manipulative for various mathematical operations such as, addition, substraction, division, and multiplication. We also talked about algebra dominoes in one of our earlier posts. Following the similar trend, hand2mind developed a version of dominoes as a manipulative for learning about decimals.

It includes 30 plastic dominoes with either numerical values or values represented by circles or bars. Learn about various mathematical operation with special focus on fractions and decimals. Similarly in a typical matching dominoes game, here you have to find equivalent fractions or decimal values to make matches with colorful dominoes

A pair of dice is a must-have if you are looking for math manipulative. Specially if you are looking for something stashed in the back of our cabinets or laying around the house. Mathematical operations are taught through this. Just roll two dice, ask the student to add the two die to get the sum, and for subtraction, take the two die and subtract to get the difference. Some teach place value through dice as well.

You see, there are endless possibilities of learning through a pair of dice. Learning Advantage took the same concept and blend it with the decimals. Yes.. you are right! Instead of numbers upto 6, these dices have decimal number as the dice values. Not only this, the whole pack have dices with upto thousandths place value, so there is a lot to learn. Each die is ten-sided so students can generate every possible number between 0 and 9, 999, 999. 999.

Decimal Ruler is even though a good manipulative but have limited use. Like it can be hard to explain negative values to young learners through it. Number Line board activities can be considered as an extension to the use of ruler as a decimal manipulative. Not only decimals, Number line is a complete all rounder package to have on-hands experience of different mathematical concepts. A total of 50 double sided activity cards are included in this pack. Here the content cards can act as a check off list.

As per the manufacturer, ‘The front side provides teaching objectives, resources used and procedure. The other side provides visual examples.’ This product have fairly positive reviews with one user saying It is very helpful for homeschooling activites. Other than decimal and fractions, this activity is also helpful in teaching odd & even numbers, greater than, less than, addition, subtraction, skip counting, multiple addition, tiding numbers, place value, reversibility, multiplication and absolute value.

In our previous post of math manipulatives, we talked about fraction tiles. These are really helpful in improving your memory of fractions. Decimal Tiles play a similar role, but for decimals. Memorizing some of the decimals on tips is important, specially if you are going to give any competitive examination where timing is everything.

Not everytime you need to pick up pen and paper solving 3/4 , when you already knows that its 0.75 portion of the whole. You need to have good understanding of fractions and decimals to easily remember how it works. Decimal Tiles as a math manipulative will help you deal with this part. These aids help children to get hands-on experience with decimals, providing a visual and tactile way to teach fractions,decimals and their relationships. Color coded pieces help little ones to visualize and identify fractions with ease as they line up the tiles in the tray. Make your own game and rules while playing with the tiles. It will be real fun.

Cool thing I realized is that anything can be made manipulative if you’re smart enough. You can literally make use of the stuff lying around the house. You really don’t have to buy any expensive stuff or have to spend any dime. Back in the days, When I frequently visited my village, I observed how kids used to play tic-tac-toe and marbles on sand.

Also, they used to lay bricks in a line and Compete with each other on who jumps the longest. Inspired by this, I used the concept in a line system to teach number line concepts to young learners. The bottom line is, we get to learn from anything happening around us. It is the question of how we observe it.

Similarly with decimal manipulatives, there are a lot of possibilities. Let us take the example of decimal tiles we discussed in this post. If you don’t feel like buying. Just take a chart paper and cut out the fractions as given in the product. Its simple as that. Similarly, you don’t have to buy the decimal dices. If you’re comfortable, take the common ones and ask the kids to consider the dots as the decimal values (like three dots is 0.3,0.003..etc.).