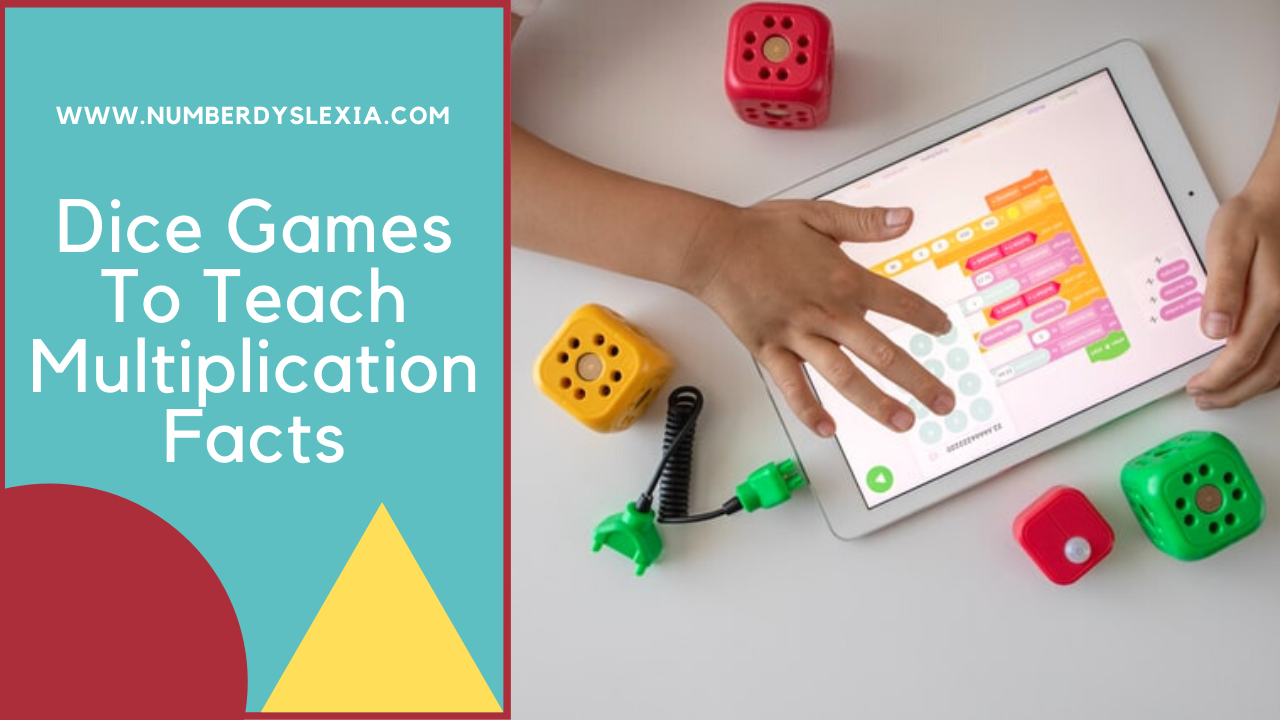 It is now a well-established fact that dyscalculia is a reality! Children suffering from dyscalculia cannot identify numbers or operational signs like ‘+’, ‘-‘, ‘x’, etc. That is why educators advocate replacing pen-and-paper practice by performing an action using manipulatives to understand numeric relationships and operations.

Besides Dyscalculics, beginners of numeric operations can also get strategy-driven[1] learning when they perform activities using manipulatives. A dice is believed to be one of the oldest manipulatives; it is useful as a multi-utility tool that helps teach concepts like multiplication facts.

Before I move to the dice games list, let me acquaint you with few basics about multiplication fact.

What is a multiplication fact?

What are the various components of a multiplication operation?

These are the basic components of a multiplication operation.

Dice is a cube with numbers 1 to 6. One can take a plain cube with blank sides and write other numbers on that too. Since you need numbers to multiply to arrive upon the multiplication fact, dice offers a suitable solution for having a multiplier and multiplicand.

Also, rules for calculating multiplication facts are easy to form and follow on a dice. For example, it is easy to say that a number received on rolling the first dice will be multiplicand, and that got from the second one will be multiplier (just an example).

Further, dice help build number sense. By way of subitizing, learners can find what numbers represent and then perform other numeric operations.

If you are still wondering what games can be played using dice to teach multiplication facts, I provide you here a perfect answer right away. Please look at these dice games that we have curated to show you what exactly teaching multiplication facts using this manipulative looks like in action.

Dice games that can help you give practice on multiplication facts

It is a single dice game. You take a sheet and make two columns. The first column is for the number you get on rolling the dice. The second column can be named Double, or ‘x2.’ Now, start rolling the dice and keep writing numbers you get one below the other. Your sheet will look something like this:

(Please make a table like this, It is just an idea)

You can make two such tables and give one of these to your partner. You can now set the timer to a chosen duration, say, two minutes, and try to finish the table faster than your competitor. Thus, this game can help you find multiplication facts and have a suspense element added to the process by rolling the dice.

Every dice, when rolled, shows a number at the top side. So, you can have two dice and roll them together. For example, dice 1 shows 2, and dice 2 shows 4. You can create an activity sheet for your student by engaging them in rolling the dice and writing expression like this:

That is how you can create a table with these columns and ask the student to find multiplication facts. To bring more creativity, you can replace the numbers with dots to let early learners apply number sense or subitizing skills to find the product or fact.

It is the game where rewards await the competitors right in front of them. All they need is to calculate correctly and acquire those rewards. It starts with the rolling of two dice together by two opponents one by one. A heap of rewards like candies or fake coins is kept in the middle of the table. Important steps of this game are:

4. Create your multiplication board game

You can take a rectangular board and draw slots on it. A few slots can have rewards, others some punishments, and rules to multiply like ‘Find twos,’ ‘Find Fours,’ ‘Divide it by 5’, and so on. Players will roll two dice together, and instead of adding the numbers, they multiply it and move their chip that many slots.

READ :   Does Dyscalculia Qualify For An IEP?

So, right from the point of rolling dice and throughout the gameplay, the player gets lots of opportunities to practice multiplication facts. They can also recall strategies learned from number bonds charts to do more operations with numbers received on rolling the dice.

I have named this game ‘Double it and Add’ to give a clear idea of what to expect. It can be played with one as well as two dice. When played with one dice, the player asks the opponent to keep counting 1,2,3,4…. and so on in mind. When he says, ‘Stop,’ the other person speaks out the number where he stopped the mental counting. Now, the first player rolls the dice and gets a number.

His task is to double the number he received on dice and add the number given by the opponent. The process can be repeated for the opponent. The catch here is that the whole process of multiplying and adding is time-pressed. The one who calculates taking less time is the winner. A stopwatch is used to record the time taken by the teacher/parent.

When played with both dice, the players can multiply the numbers received on rolling. Then, they have to double the multiplication fact and add the fact with the numbers received. For example, suppose one dice shows 2 and the other 4. The student will multiply 2×4 mentally and then double the answer, which is 8. The next step is to add 2 and 4 to 8. It is designed this way to give a mental workout and increase the thinking flexibility of students.

Roll dice and keep multiplying numbers received. For example, suppose the numbers received are 2 and 6. The student multiplies these and gets 12. He again rolls and this time gets 3 and 3. So, the next step will be 12 x 3 x 3. The rolling and multiplying continue till the multiplication fact total 500 or a number near to it. The teacher keeps a count of steps in which the student reaches 500. Thus, this dice game allows learning not only just one but numerous multiplication facts in one round of play.

Make a grid 10×10 and write numbers on it 1 to 100. Roll the dice and see where it lands. If it lands on a line, the rule can be set as ‘choose the number on the left of the line.’ The student speaks the number received on the dice and multiplies it with the number where the dice has landed.

The reward for an activity can be decided in two ways. The teacher gives a point if the product is correct and continues doing so for the chosen number of rounds. The student who receives a higher score wins.

The other gameplay can be – write Start on number 1 and Home on 100; two students are given one color-coded chip each. Students roll dice, multiply the numbers received, and move the number of slots equal to the product. One who reaches the Home sooner is the winner.

Engagement is one of the prime reasons why dice games are chosen to teach multiplication facts. Since there is uncertainty about what number dice will give, it keeps the child’s mind prepared to calculate without prior support. Besides engagement, the dice can offer perfect settings for encouraging students to multiply correctly and fluently.

Also, it offers a breezy break from the rote memorization method, which can be mentally tiring sometimes. Teachers can employ dice and carry out a quick number talk during the gameplay to help students understand the strategy.